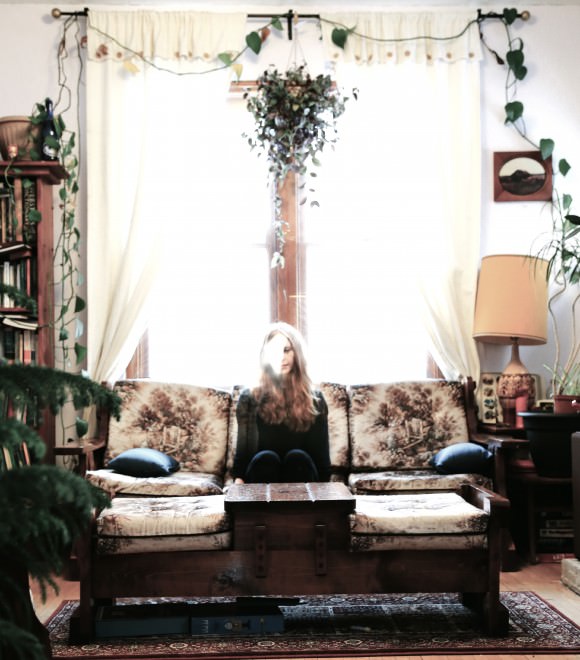 After the release of her solo record Brother Loyola in 2011, Jessica Jalbert dubbed herself Faith Healer and teamed up with producer Renny Wilson, her longtime collaborator and friend. Together, their sound is heavily influenced by ’60s and ’70s psych rock, but it’s still bright and upbeat enough to conjure images of summer, even when the weather is bleak. We’re excited to have an exclusive premiere of Cosmic Troubles, Faith Healer’s debut album, before its March 31 release on Mint Records. It’s blissful—just listen:

Jessica and I chatted over the phone about crooked teeth, growing up in the woods, and making friends through music.

STEPHANIE KUEHNERT: What are you up to today?

JESSICA JALBERT: I’m at work, hanging out in the back room. I work at a record shop.

It’s definitely a dream job, but I’ve been doing it for like eight years now, so as much as it is a dream job, it has its pros and cons. But it’s awesome. I basically just hang out and play music all day long. It’s particularly good for someone who can’t have a normal career because I’m touring and playing shows and things like that, which make it hard to hold down a normal job.

I totally get that. Is it good to be immersed in music?

Yeah totally. It definitely helps. I don’t really have my fingers to the pulse normally, but because we get all of these new releases I find out what people are into now. It’s rewarding because otherwise I might not have heard certain new artists that I’m really into, and it gives me the chance to explore old stuff, too, because it’s there in the shop and you’ve got to have music playing.

What have been some of your favorite discoveries?

I’m so bad at answering that question! Someone will come into the shop and say, “What have you been listening to lately? I want a recommendation.” And I’m like, “Uh, uh, ummmm… I don’t know!” I have been getting really into Steely Dan, which is not very cool really. It’s really really dad rock-y.

Yeah, Steely Dan is awesome. Definitely not cool, but awesome. This morning I’ve been listening to some Krautrock stuff—I put on La Düsseldorf, which is a German act that I didn’t know about until I started working here. So that’s a discovery.

What about Cosmic Troubles? It’s a got a very psychedelic vibe that makes me want to just hang out in the park and stare at the sky. I’m curious what influenced or inspired you?

I go through phases musically where I’ll hear something, and I’ll be like, “Oh yes, that’s the kind of thing I want to do!” And a lot of what I was really into while I was writing Cosmic Troubles was sunshiny, psych kind of stuff. I don’t think I’m capable of heavy, hard psych, but sun-kissed Tommy James and the Shondells, or Velvet Underground’s Loaded—that stuff moved me for a long time, and it still does.

Your new album is a solo project, but you also collaborated with the musician and producer Renny Wilson. How did this album come together?

I started working with Renny a long time ago. We had a bunch of mutual friends, and he was playing in my band, which was called by my name, Jessica Jalbert. He recorded my first album, and I really loved working with him because he’s a huge personality. I learned a lot from him. He really held me accountable and didn’t let me cheap out where I might normally have because I’m lazy.

This second time around, I knew what I was getting into with Renny. We recorded in his parents’ basement, which is a really great atmosphere. His parents are wonderful people—really patient and willing to let 20-something-year-old kids hang around and make a lot of noise. We laughed a lot, and the atmosphere was really open. I’ve been in lots of studios before and sometimes the atmosphere is really intimidating, or you don’t feel like you can try shit out or take a lot of risks because it might be stupid and people might think you suck. But I didn’t feel that at all with Renny. He’s a totally exciting, fun person to work with.

What do you think makes you and Renny click?

It’s hard to imagine my life without Renny, to be perfectly honest, because we’re so close as friends. Our whole group of friends is very close. There have been times in my life when I totally hated Renny, and I’m sure he’s known that, and I’m sure there’s been times in his life when he’s totally hated me! But when you care enough about someone to totally hate them, there’s something there. He’s a super heavy force. He’s really artistic, and he pushes for what he believes in. I probably wouldn’t have done a lot of the stuff I’ve done if he didn’t push me. I don’t know why exactly we work well together, but I’m lucky to have had him work with me.

It’s important to have that person who really pushes you artistically to go to the next level; it’s so easy to just stay where you’re comfortable.

Yeah, and it’s really easy to feel incapable or insecure. Renny’s the kind of person who is like, “I really want to do this!” And then he’ll do it. He believes that everybody has the same capabilities as he does, which is true. It’s good to have someone who believes so much in themselves because it helps you believe in yourself, too.

Speaking of belief, how did you come up with the name Faith Healer? I feel like all that I know about faith healing comes from episodes of Supernatural and Carnivàle.

I was raised in a really religious household, and even though I don’t subscribe to that stuff anymore, in my music I’m still inspired by mythical stuff around religion. It was a big part of my life until I consciously made the decision not to self-identify that way. But really the only reason I chose the name is that I was hanging out with a bunch of friends at a cabin, and we were all standing in the water and it seemed like some sort of baptismal thing. So it brought up the conversation of faith healers and how—I don’t want to offend anybody—but that seems nuts to me! I was there with a bunch of friends and we were talking about forming a band together. I said, “Hey, Faith Healer, that’s a cool band name, let’s do that!” It never came to fruition, but when I wanted to change my name for this album it came up again, and I decided to use it.