Ashley and I had the guy we both dated in common, but our friendship isn’t about him. 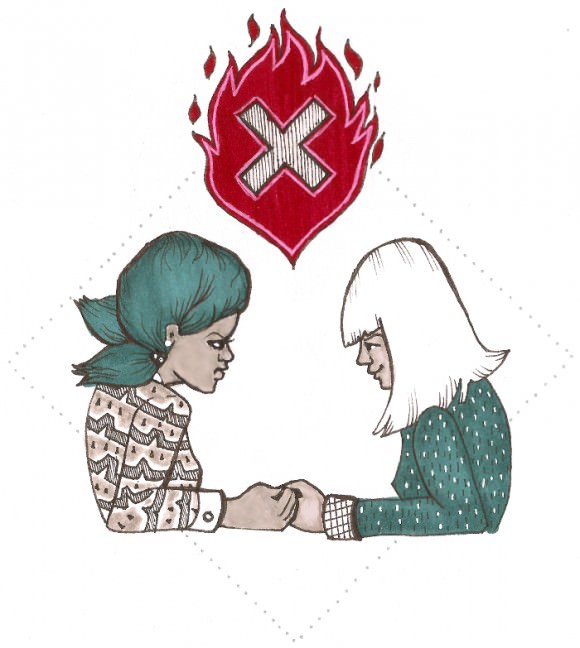 I dated a man who was in love with someone else. It was his ex-girlfriend, and they had ended their very tumultuous relationship only a month or two before we met. She was so present for our entire relationship. He always talked about her: about the things she did that messed with his head, about the distrust on both ends of their relationship, about the TV shows they watched that he couldn’t enjoy anymore. Mostly, he talked about how he couldn’t seriously date anyone because he was left so hurt by the breakup. I began to resent her, this mysterious girl who lived on the other side of the country, this girl who was keeping me from having a real relationship. I would look at her Twitter page, her Instagram profile—any social media I could find to understand who this girl was and why she had such a hold on this guy. How she could be affecting my life and emotional well being when I’d never met her before?

I spent so much time and energy thinking about Ashley before we’d ever met. I had been told that she knew who I was and hated me by people who like to stir up trouble. Our community of comedians is close-knit and thrives on drama, and I should have recognized that from the start. However, I took their words as the truth. I simultaneously was frightened by her and hated her for reasons that were petty and immature: She was beautiful, she was successful, she was all anyone talked about, and for all I knew, she hated my entire being. In the back of my head, I thought, I bet we’d get along. She was bold, unafraid, and funny. We had mutual friends who sang her praises. But I shoved those feelings away because I was trained to hate her. I wanted to hate her! Because if she wasn’t a monster, that meant the guy I was dating was. And that was something I refused to believe.

Not just hate her—we had been pitted against each other. I can’t tell you the number of times I was compared to Ashley. By the guy I was seeing, by his friends, by anyone who knew both of us. I was the good guy and she was the bad guy, because she was the ex-girlfriend. And all ex-girlfriends are CRAZY!…right? We were opposites and enemies, and we’d never once spoken a word to each other.

There are two choices when two girls are pitted against each other without ever having met. They can embrace the drama and hate each other for eternity, or they can meet and decide for themselves whether they like each other as people. Ashley and I first met at a restaurant when a mutual friend threw an impromptu get together. I had broken up with the guy, and was very depressed about it. I missed him all the time, thought of him constantly, and was still occasionally smooching him. We spent the first hour eyeing each other from across the room. I was still terrified of her, and talked to anyone who was standing far away from where she sat. I thought if I came near, she might rip me to shreds. But I also thought, Maybe we can actually speak to each other.

As the night wound down and people began to leave, we found ourselves sitting at the same table, separated by a few people. I laughed at a joke she told to offer the first olive branch. We were still not making eye contact. Neither of us was sure if the other was still seeing this guy we had shared. I wasn’t even sure if I was still seeing him. My heart was pounding. She began to tell a story of a guy she used to date who didn’t treat her well and looked at me. I returned the gaze and said, “Me too.” She and I looked at each other for a moment while the rest of the table had no idea what we were on about.

People began to leave. I was sitting at the far end of the table alone. I offered, “Should I come sit over there?” Ashley said I should. I tried to be casual as I walked over, but I was frantically thinking how we’d begin this conversation. Would we introduce ourselves? Hi, I’m Sandy—she knows that, you dummy!! We clearly knew everything about each other. We were both the other woman.

I sat down slowly and Ashley turned to me. She looked me in the eye, put her arm on my arm and said the most perfect thing she could have said: “Sandy, how are you doing.” It wasn’t a question—she knew exactly how I was doing. She had been through the same tumultuous breakup, had felt the same betrayals, and knew that we had to break through the bullshit that had been layered on us. I can’t for the life of me tell you how our conversation went after that because we talked for three hours nonstop. It felt like the biggest weight off my shoulders. We blabbed about our mutual experiences, all the times we almost met, our mutual friends, how wild it was it was that we had never met. My mind was reeling, and so was hers. Oh, this girl is a person. We exchanged numbers and she later texted me, “How weird is it to see my name pop up on your phone?” Her name had always given me the chills, and it now invited comfort.

Meeting Ashley changed my life. What we had in common was this guy we both dated, but our friendship isn’t about him. It’s about two girls who were hurting and found comfort in knowing they weren’t alone, and about finding someone who shares your exact story. It’s about how important it is to find someone who understands your pain. It’s about breaking through the barriers of drama that attention-seeking people love to put up. And it’s about admitting you were wrong for judging someone.

I have a secret that Ashley doesn’t know, which is that it wasn’t just chance that we met at that restaurant that night. I knew that she would be there, and I wanted to meet her so badly, wanted to see if we would get along, wanted to see if female friendship could overpower all the heartbreak I was feeling. I needed that night as a crutch because there was no way I would ever reach out to her on my own. I went there pretending this was fate because I was too scared to make the first move. I was so broken from the recent breakup that I wasn’t myself. I’d lost all my confidence and any shred of happiness or excitement. But Ashley restored all that. She knew everything about my situation and more. She was there to say, “Hey, you’re not alone.”

Girls are taught to be jealous of and hate one another from a young age. The term crazy is thrown around quicker than a Frisbee, or a hot potato, or one of the many things you can throw. I’ve learned so much from this, but mainly, when someone is called “crazy,” that usually isn’t true. I have to make those judgements for myself. Or, not at all.

My friendships have lasted longer than any relationship with a man has, and I know the one I have with Ashley will be strong long after our memory of this guy we shared fades. Because—and I can’t stress this enough—it’s not about him. It never was. ♦