I resent how often I start an Editor’s Letter with something along the lines of, “Lately, I’ve been feeling like life is essentially horrible!” I know how silly it sounds—that it conjures images of, like, a bratty sock puppet wearing a tiara; that just because your brain is capable of “Top That”-ing itself with a new thought darker than any of your thoughts prior, it does not mean that this new, dark thought is the most true, just by virtue of its darkest-ness. I know that I feel this every year, and that, each year, I do myself a huge disservice by assuming that whatever I felt in my life before was like, Feelings For Babies, produced by Klasky Csupo, sponsored by Juicy Juice; that I am such a dummy for ever having thought that everything I was yet to feel would be basically tolerable.

I want very badly to be good, kind, “myself” with other people. I worry that “myself” sucks, so I think about everything I’m about to say very hard, and then usually end up not saying anything at all. I get glimpses of what it’s like to respond to the world honestly, instead of trying to show people someone I think they will find likable. The former, when I can do it, is rewarding; the latter is safe, but also, as established last month, a form of slowly dying, which sometimes doesn’t seem so horrible.

I believe it comes down to trusting yourself—that you won’t ruin everything—and trusting the world—that it can be good; that this day won’t be painful; that this social interaction won’t be the worst. And I don’t think you can do a ton of mental maze-running to get there, because that’s what draws you out of interacting with what’s in front of you; you just pay attention as closely as possible to everything happening outside of your head, and then your head will follow and become occupied with the things that make life worth living: the wonderfulness of the friend you’re talking to, the fascination they have with what they’re telling you about, how much more there is to learn about the thing they’re discussing. Or, if the interaction is genuinely bleak, maybe it’s amusing, or something you can write down later or entertain a friend with, or maybe it’s just the kind of encounter you accept if you want to be a person in the world. There are worse things than a bleak social interaction, and being a person in the world is too good in too many other ways for uncomfortable social interactions to dictate how you exist. I don’t mean to sound reductive, because depression is a lot harder than that, but I hope that my FOMO on life can outweigh my fear of life.

Here are some songs about trusting yourself, not quite POWER ANTHEMS, but sentiments that are sure to turn any bratty sock puppet into an open-hearted, I don’t know, hummingbird. Okay, yeah. Yes. Yes. 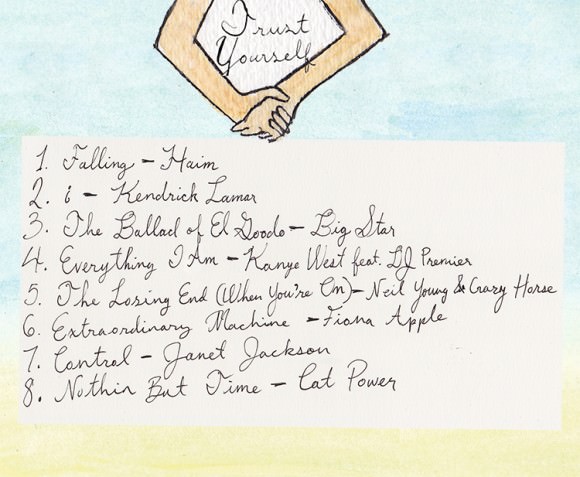