Why do I keep writing about that time I got my heart broken? 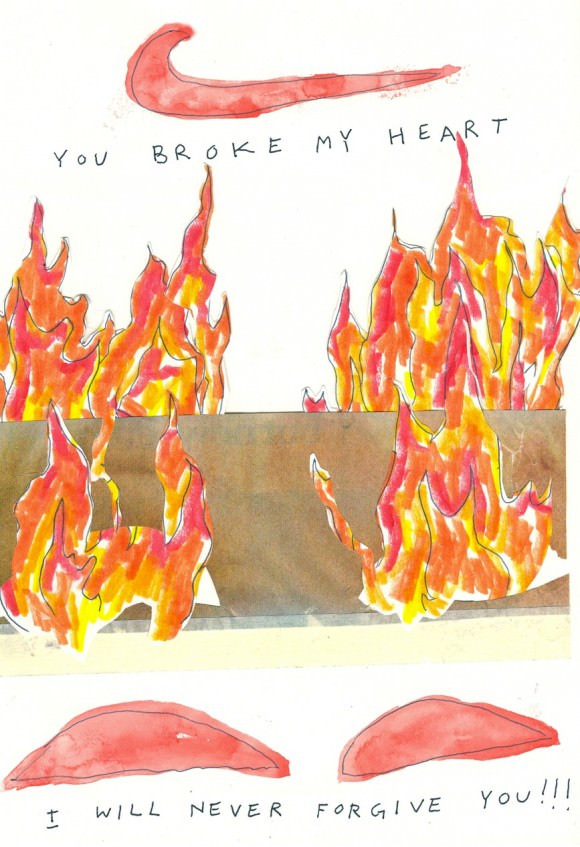 There’s a scene that I’ve written into novels and short stories probably 10 times. Not because I think it’s such a unique story, but because when something happens to you, it feels unique, no matter what. When something happens to you, you feel like the world needs to understand. Lots of things have happened to me, of course, but for some reason, this one has been stuck to me like gum on the bottom of my shoe, which is why I keep writing about it—to see if I can peel it off and throw it away for good.

S. and I went to a small elementary school on New York City’s Upper West Side. He had a scar under one eye, which seemed dangerous and sexy, and wore his hair in short twists. When I was in seventh grade and he was in eighth, our (coincidentally) matching Air Max sneakers were both stolen from the school gymnasium on the same day. I called him to talk about our mutual loss. I was so excited to have something in common with him, an actual subject for a conversation, that I jumped at the opportunity.

I was on the phone all night with S., who was funny and easy to talk to about absolutely nothing. I quickly knew his number by heart, and we talked most nights a week, about TV shows, and Hot 97, and summer camp, and ourselves. It was his idea to start coming over to my house after school, which also became a regular thing. His timing was incredible—I think he interacted with my parents only once, even though they both worked from home and were usually around. He was a perfect teenage ghost, a boy who left no trace. Except for the hickies. I’d never seen so many hickies before, and I haven’t since, either. My ribcage was like the backdrop to a new galaxy, the sun in the center of a constellation. It was proof that S. had been there, had been with me. At school, we were civil, or maybe flirty, but nothing more. Whatever we were, it was private, though I wanted him to be my boyfriend more than anything. He was so cool, so confident—I was sure that if I was his girlfriend, I would be those things, too.

All of this kissing and phone-chatting went on for years—until I was in tenth grade, at a high school across town, where S. was a junior. One night, we were on the phone, talking about boyfriends and girlfriends. Somehow, by the end of the call, he was my boyfriend. I wish I could remember exactly what we said, what the magic words were, but the truth is, there are no magic words. Like everything else in life, getting what you want is a combination of asking for it and the time being right. And finally, finally, the time was right. The next day, we spent our free periods intertwined on stoops around school.

Three days later, I was standing in the school’s lobby, listening to the morning announcements. S. walked in with a friend of mine. They were holding hands. The girl’s neck looked like she was wearing a polka-dotted purple scarf. Just like that, I knew I had been dumped. No, not dumped—I had been pushed aside. There were an abundance of gorgeous, brilliant girls at my school, but this one had recently cut off her bangs at her forehead, so that they were growing out like a tiny, floppy, unicorn horn. It was one thing to have been forsaken, but to have been forsaken for a horn? It was staggering. I felt humiliated and angry, but I also wasn’t surprised. The world was terrible, and I hated everything about it.

S. and I never had a conversation about what had happened, not really. He tried to stay flirty and light, but I was not having it. We were done. I yelled at him in the hall later that day, and whenever he walked by, I would punch him in the arm, as hard as I could. (I don’t condone violence of any kind, but I was a girl scorned, and I was pissed.) He kept his eyes down, and didn’t complain.

This all happened a long time ago.

I’d say it took a good five years before I “got over it,” mostly because S. was still a part of my landscape—in high school, he was there every day, and even when I went to college, we had mutual friends, and there were other girls he’d dated. I had other boyfriends, too, though, and was otherwise both happy and sad every day, in the way that most people are. At the time, I was also a poet. As you might imagine, S. figured prominently in my work, but so did other people. Everything in my life seemed more or less equal—fights with friends, passing crushes, exams. Everything was immediate and happening to me in real time. It wasn’t until I took a non-fiction writing class that S. started to bubble up in a different way—he was out of my life, and yet, I was still thinking about what happened.

Since that class, I have written about That Moment (S. walking into school, the girl’s hickies) over and over—in stories and novels and essays. I usually trim it out, but sometimes details stick. In my most recent novel, The Vacationers, Sylvia, my teenaged protagonist, realizes she’s been dumped when her secret boyfriend tromps into school with a new girl on his arm. Sylvia sees the other girl’s hickies, and her horn-bangs. I’ve written abandoned short stories about how a boy in a similar situation (cheated on in front of everyone at school) wins back respect by doing an elaborate dance routine in his school mascot’s uniform. A story I wrote for THIS website is a reshuffled version of basically the same events!

You don’t get to choose which tiny slivers of time poke into your psyche and lodge themselves there forever—the ones you’ll come back to again and again. I remember an overnight visit I made as a high school senior to the college I ended up attending better than I remember the four years that followed because I spent that night crushing hard on my friend’s roommate. I remember my first kiss, and the bus ride home afterward, when I felt like I must have looked different, and how I felt that exact same way after losing my virginity.

Was S.’s betrayal a profound injustice? Of course not. Did it affect the rest of the world? Not a chance. It didn’t even affect the rest of my school, or my family. I begged my older brother to do something on my behalf, even just to hate S. with me, but he said he couldn’t, because S. was so charming, so funny, so cool. Most of my friends seemed to feel the same way. I never spoke to the girl again, but I have used her stupid bangs-trim in different characters in my stories so many times that by now it seems like a gift. As does the rest of it, really. Writers are like flesh-eating zombies, chowing down on feelings and situations and saving them for later. Putting things on the page is how I sort them out, how I figure out what really happened, or how I actually feel.

Even writing this has made me realize things about what happened with S. He was just a kid, too! He wasn’t a super-villain! That night on the phone, when we mysteriously became a couple, he may have been in the exact same predicament I was in—waiting for someone, just like I was, to be bold enough to identify what we were doing as significant. He probably had no idea what he was doing when he hooked up with that other girl, and he might have felt super guilty about it. It’s also possible that he was a scumbag jerkoff, but it certainly wasn’t horn-girl’s fault, that much I know for sure. The only reason I keep sticking her into things I write is because of that horn, which I found (and still find) a hysterically funny act of hair physics.

At this point, it’s almost embarrassing to still have angry feelings about something that is (on the surface) so inconsequential. And yet, there they are. Or were, really, until I wrote this piece and actually thought about the whole situation—how I felt leading up to it, how I felt during it, how I felt after, and how I feel about it now, which is almost-grateful and amused at myself for holding such a killer grudge.

The last time I saw S., I was standing on a street corner, waiting to cross. He drove by in a giant SUV, slowed down, winked at me, and drove off. I know from Facebook that the girl is getting married (and that her bangs finally grew out). My husband and I have been together for almost 13 years. Life keeps moving. But no matter where you go, you are made up of your memories, of the moments that pierce you. No one can tell you what’s important, or what matters, or what you’ll remember for the rest of your life. Not even you. Time is the most important factor in healing wounds, but in my case, it also helped enormously to write about it—both about how I felt then and how I feel now. On the page, it can be much easier to gain perspective, even if it takes you years to get there. ♦