A song premiere, and some advice on when to “tune in to your gut.” 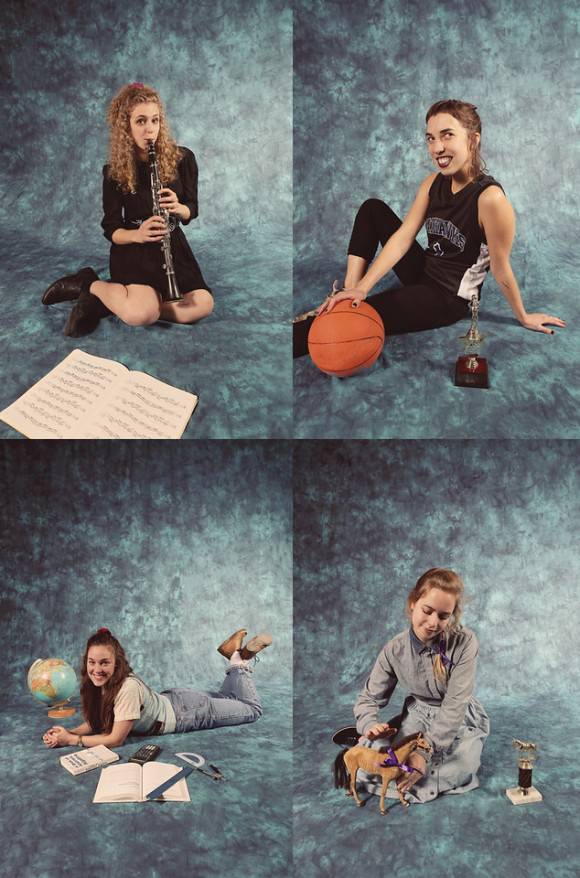 Chastity Belt is not the kind of band to shy away from making a statement. Back in 2010, Julia Shapiro, Gretchen Grimm, Lydia Lund, and Annie Truscott formed the band in Walla Walla, Washington, and they’ve since relocated to Seattle where they’re part of the city’s thriving music scene. They sing about feeling antisocial in a place with a reputation for “social freeze,” chips and dip, and nip-slips—among other delights. One of their publicity shots ranked number one on a list of the most “painfully awkward band photos,” and they’ve earned a reputation for their tongue-in-cheek approach to pretty much everything.

The band’s first album, No Regerts was a gently sardonic (and well reviewed) gem, and on March 23rd, Chastity Belt will release their second album Time to Go Home, on Hardly Art. Take a first listen to their new track, “Joke,” right here:

Chastity Belt have a lot to prepare for right now, too! Big things on the horizon include: an appearance at SXSW, their album release, and a tour with Courtney Barnett. They still made time to email-chat with me about the Seattle Seahawks, recording in one of the most beautiful spots in the Pacific Northwest, and the dubious requests they receive from fans.

CHONA KASINGER: On the track “Time to Go Home,” you sing that you “just wanna have a good time.” Besides dancing with shiny, shirtless Macklemore look-alikes, how do you like to spend the weekends in Seattle?

CHASTITY BELT: We all live in Capitol Hill, which gets overrun with tech bros on the weekends, so we prefer to go out on weekdays. On weekends, we go to house parties or shows and rollerblade during the day.

There’s so much going on musically in Seattle. What are some of your favorite bands from the city?

[Julia is] in another band called Childbirth, so obviously that. Also, Dude York, Pony Time, Tacocat, Lisa Prank, Wimps, Stickers, So Pitted, Posse, Punishment, and Heatwarmer are all great.

Those are all super awesome bands. You guys recently held a fortune-telling session. How did it go? Do you have a key piece of advice about romantic relationship?

Julia got really into reading palms. Gretchen became intimate with her crystal map. Annie gave a few unicorn readings. But if you’re looking for serious relationship advice, then cootie catchers are probably your best bet. There isn’t really anything we found out that could apply to everyone because relationships are so unique. The best advice might be to tune in to your gut and follow your intuition.

What’s the best reaction a fan has had to the band’s name?

A stranger recently emailed us asking if we would be willing to hold the keys to his chastity device.

What an honor! Who are some of your favorite strong female personalities in pop culture these days?

Ilana and Abbi from Broad City are amazing. I love that show so much.

You recorded your new album in a deconsecrated church in Anacortes, Washington. What was that like?

A little drafty. We were all standing pretty far apart from each other which was funny, but being in such a big room fits the vibe of our music more than a cramped studio—we like to give each other a lot of space musically. Anacortes is a great town to hang out in; they have really good donuts and nice views—very romantic. ;) I kept busy reading Rookie in the park across the street while Julia did vocals.

Sounds like you guys found Donut House! What about when you play live gigs; what’s it like to hear dudes singing along to tracks like “Giant Vagina”?

Most dudes don’t sing along to “Giant Vagina.” Especially when we started out, in Walla Walla, we got male attention simply because of the “novelty” of being women with instruments. Most interviews bring up labels—”riot grrl” or “all-female” or what have you. We’re proud to be women creating something together, but I wish more people recognized it’s not the sole thing that defines us. We’re almost exclusively compared to other female musicians in reviews, even when the only thing we have in common [with those female musicians] is our gender identity.

According to my sources, some of the band’s collective interests include sports, college, and science. So, who is your favorite Seahawk? What is your best college memory? Is there a science-y nugget that has helped you as a band?

The Seahawks have great personalities, but maybe we relate most to Marshawn Lynch, who really seems like he’s just doing what he loves. He doesn’t buy into much of the bullshit surrounding football. I heard he doesn’t really go to practice—he just shows up to play the game. For a while, there was a great cardboard cutout of him sponsoring Vita coconut water in QFC [supermarket].

[At college] we played a few fun shows at a dilapidated house. I remember one in particular where people danced so hard that the old wood floor was bouncing. A PA fell and knocked over Gretchen’s drum set and a Costco-sized jar of Prego sauce, and then a box of Cheerios exploded all over our guitars.

We’re all pretty into astrology. We’re a very astrologically balanced band—when we tour, each of our unique roles really comes into play.

There’s a beautiful lack of censorship in your songs, and the way you talk about sex is really refreshing. What made you decide to create such candid music? Besides personal experience, where do you draw inspiration for your lyrics?

My favorite songs make me feel like I know the person behind them, like we’re friends and we hang out and I totally get what they’re saying. I guess that’s what I’m hoping to achieve with my lyrics. Most of them are just conversations I would have with my friends, or thoughts that cross my mind that I think are funny or worth holding on to. My inspiration is just being a girl in the world.

In the mini documentary “Unlocking Chastity Belt,” Peter Richards from Dude York explains that he was confused about the band’s vibe, until he realized that “Chastity Belt was both not serious and very serious.” What do you think of that description?

That hits the nail right on the head. We seriously love what we’re doing, and the best way to keep enjoying it is to not take it too seriously. We all have a sense of humor and easy going-ness that inevitably comes out in what we do. We started playing music together as a way to have fun when there was nothing else to do, and we’ve maintained that spirit.

Q: What did Delaware?
A: A New Jersey! (I’m pretty sure that one’s from a banana Laffy Taffy wrapper). ♦