Unlearning my own anti-blackness. 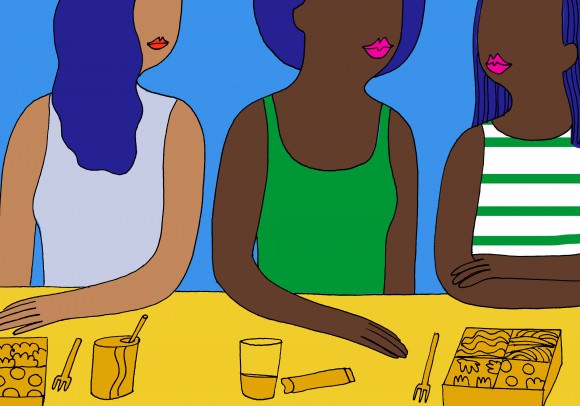 I was popular in high school. In fact, I pretty much fit the stereotype of what a “popular girl” was like. I was confident, dismissive, well-liked (and -despised), and mean. Looking back on those days, I’m embarrassed—I had a major superiority complex. But my feelings of superiority didn’t just come from being told I was “cool” and “pretty.” They also stemmed from my own deeply ingrained anti-black racism and colorism.

You may be asking, “But can black people even be anti-black?” The answer is absolutely YES. Anti-black racism is worldwide; it’s part of the institutions, cultures, and communities that shape our lives. Colorism is basically internalized anti-black racism. Alice Walker coined the term to describe the social and cultural practice where people are considered of greater value, intellect, and beauty the closer they are to whiteness. Colorism is the reason that European beauty standards are reinforced within communities of color. When these biases are internalized, they can show up as a fear of “looking black,” and trying to look as “racially ambiguous,” or as not-black as possible.

My colorism was subtle, and it took me a looong while to realize that these biases were embedded in my own brain. I was mean, but it wasn’t like I’d walk around screaming that my light brown complexion made me better and more attractive than my darker-skinned classmates. Still, I distinctly remember feeling above them. I rarely spoke to the black girls in my class, and on the rare occasion that I did, I felt embarrassed to be in conversation with them. I identified as Ethiopian—never as black—because identifying as Ethiopian allowed me to play up my “exoticism” while also seeming proud of my heritage.

At school, I hung out strictly with the mixed and “racially ambiguous” girls and we thought we were IT. We were the mean-girl clique from your favorite teen movie, but in place of white skin and blonde hair, we were brown with long, curly hair. Since my high school was predominantly black and brown, looking like you were mixed was praised and worshipped. By some weird logic, our faces, bodies, and hair combined the “best of both worlds.”

Even so, as girls who were close to blackness but who were invested in being not-black, we were careful to reject all stereotypes of what blackness looked, acted, and sounded like. If black girls were supposed to be loud and aggressive, then we were soft-spoken and composed. We rarely ever wore our hair in “too-black” hairstyles like braids or twists, and we didn’t listen to hip hop, bashment, or grime—again, “too black.” My reward for distancing myself from blackness was hearing my white and brown friends tell me that, in their eyes, I wasn’t really black.

Among East Africans—specifically Ethiopians, Eritreans, and Somalis—the idea that we aren’t really, properly black, is actually pretty common. Often, people from southern and West Africa agree with us, maybe because many East Africans have features that adhere to Western beauty norms—narrow noses, loosely coiled hair, lighter skin. But establishing our difference from other Africans also comes with a dose of anti-blackness. At home, my mother would comment on my younger sisters’ hair, saying that it was “too rough” and “African-like.” My sisters have darker skin than I do, and my mom would advise them to stay out of the sun to avoid getting any darker. Blackness was something to be ashamed of.

The sense that blackness was undesirable was all too obvious at school, too. There, to be a “too-black” girl meant to be unwanted—romantically and socially. Whenever a black girl spoke up in class discussions my classmates would snicker and mumble, as though black girls were less smart. The “cool” boys made no secret of the fact that, in their eyes, black girls were unattractive and masculine (as though that itself was insulting). Insults like, “Her hair is so picky,” meaning “nappy” in UK/Caribbean slang, and “She looks like a beast,” were all too common. It’d be a lie to suggest that I didn’t benefit from my school’s toxic hierarchy. But at the time I wanted to be admired and I wanted to fit in, so I made choices that fueled my own social status and power.

When I was 16, the weird structure of my school became super clear. Guys were asking girls to prom, and I noticed that even guys in relationships with darker-skinned black girls were asking lighter-skinned girls to be their dates—just to impress their friends! The lighter-skinned girls were sparkly gems that you could wear on a special occasion, while darker-skinned girls weren’t considered fit for special occasions. If nobody could be true to their actual feelings, and everyone’s self-esteem was governed by this colorist, anti-black hierarchy, then something was seriously wrong. I began to feel disgusted with myself and embarrassed to have valued the opinions of these people. I had to rid myself of this way of thinking.