Why Can’t I Be You: Emily Serpico

The wig-making and special-effects makeup star on sticking with what you love. 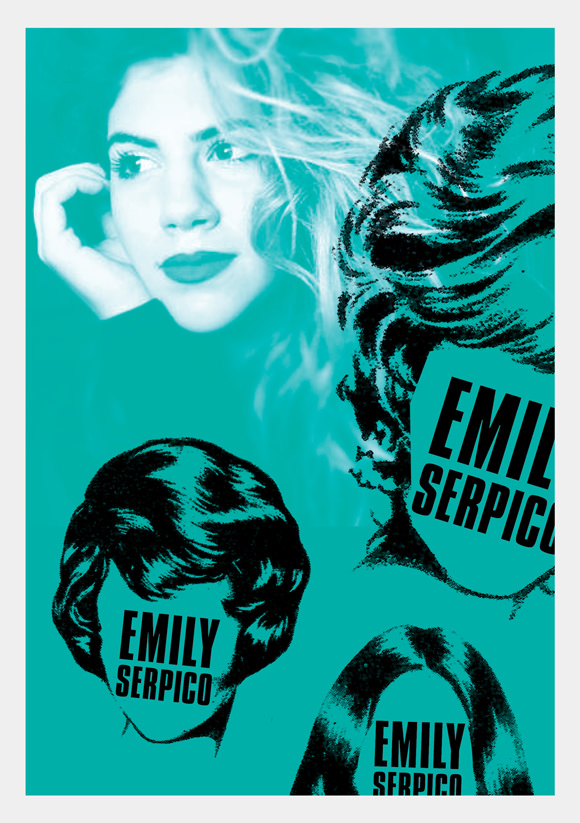 I first learned about Emily Serpico, an accomplished maker of wigs for Broadway productions and other theater events, while watching the special-effects makeup competition series Face Off. It’s basically my favorite show, because you get to see the process of how humans are transformed into wild characters for movies, TV, and theater. Emily is the youngest contestant Face Off has ever had: She was 18 when her episodes, which are still airing on Syfy, were filmed. Though some of the other contestants had more years of experience, Emily, who’s 19 now, immediately stood out as a favorite to win by inventing and creating elaborate characters like this queen:

This season isn’t over yet, but let’s just say my money is on Emily in the fantasy Face Off draft! Last week, I called her up while she was at home in West Palm Beach, Florida, to find out about how she became so unbelievably good at such highly specialized crafts.

When did you realize you had a talent for wigs and effects makeup?

I’d always been into art as a kid. I didn’t really have any interest in toys and stuff, I always had art supplies. My mom’s a wigmaker. She started teaching me how to ventilate when I was 11 or 12, and I loved helping her. And from there, my high school had a haunted house, and I had interest in makeup, so before it started they said, “Can you help with makeup?” And I was like, sure! Then I fell in love with it.

What was the first makeup you did at the haunted house?

I did cuts! I did cuts, bruises, and burns. I learned that I’m addicted to latex, so from there I was like, oh, lemme try a different option! So I used gelatin, and then I started to sculpt and mold and all that came along with it.

Can you take us through the process of making a wig? Does it take like, 100 years?

Yeah, it does. [Laughs] The process is, you make a custom wig cap out of different types of nets and stuff, and then you have to hand-tie the hair into the wig cap. For the most part, it takes forever. I mean, it depends on how custom it is: You can do a full hand-tied wig or you can alter a wig. [Wigmaking] is like a completely different art form.

Um, so you actually hand-tie the hair?

That is wild! What’s your favorite type of wig to make?

I like doing fantasy wigs! I love colorful, fun stuff, and I love whimsical wigs—a lot of my artwork is influenced by whimsical stuff.

Wigmaking and effects makeup seem like pretty tandem crafts to have. What was your feeling the first time you did makeup?

I fell in love with it because of the atmosphere and the idea that, oh, [you can] paint pictures—you can paint a person, too. And then you can turn a person into a piece of art, and it’s so interesting. [Effects makeup] is so much more than gore. I learned how to do it on the internet and with books.

Wait—you taught yourself how to do it?

Whoa! Is there like a community of people on the internet teaching each other how to do this?

Mostly on YouTube, and there are really good books, but a lot of it was trial and error. I was really fortunate at my high school, because I helped develop the makeup department there. Whatever materials I wanted to play with, they were able to procure them so I could, which is awesome because a lot of the materials are expensive, so I was really fortunate to have them. [G-Star School of the Arts in West Palm Beach] is an amazing school.

What other kinds of art do you do?

I like to bodypaint! I love bodypainting, because the body’s a blank canvas—you can do whatever—but I like to paint characters as well. And I can incorporate hair into all my looks, because it’s my favorite. I just love hair, so my favorite makeup involves that.

Does your love for wig-hair translate to your own hair? You have really great hair.

Thank you! I went to cosmetology school after high school to get my license, so I have a job to fall back on. Hair is something I am very passionate about, and something I wanna make a career out of. I love hair!

What are the job prospects for doing effects makeups and making wigs?

For the most part, the hair work and makeup that I like to do falls under theater. I love film, but if I worked on film I would prefer to work on hair rather than makeup because I’m better at it. Theater is where that calling is, but you can also get a job making wigs for movies and stuff—that’s one of my goals as well. I’ve been working on Broadway and musicals and stuff. My goal is to focus on theater and hopefully develop my own business. I’m not really into L.A.! I don’t feel like it’s really my scene.

So how does wig-making translate to theater? I keep thinking of giant, Marie Antoinette–era stuff.

Yeah! I love historical wigs. I love the styles. It’s not just a bunch of hair on the head— there’s a structure underneath. I love everything about it. It’s a fun process, to make the structure for it and then style it a certain way. I like to read about [historical wigs], especially powdered wigs, because the stories behind them are really creepy and kind of cool. Like, bugs and rats would live in them. I love finding out how they were built—some weren’t even hair, they were wool translated to hair. It’s pretty cool.

Wait—bugs and rats would live in them?

Yeah, all those big old wigs. Rats would go nest in them because they were so big and dirty. It’s really gross.

Ew! So being a young person working on this stuff at this really professional level, do people react to you differently? Watching Face Off, I noticed that the way some people would talk to you was a little weird—like they were shocked that you were so good and so young. I was like, Uh, yeah. She’s good and she’s young. She’s just good!

I have mixed feelings about it! I auditioned for the show, and I didn’t expect to get a callback at all. Then when they told me I was on the show, I was like, Oh god…I have to be a makeup artist. But then when I was out there, when [the contestants and I] got to know each other and shared our ages and stuff, I think some people pretty much expected me to go home first when they found out I was 18. And it was really intimidating. But the way Face Off is set up, it’s anyone’s game.

Is part of being on Face Off just about having natural artistic talent?

It’s mostly problem-solving! If you know how to sculpt and you can paint, that’s all you really need to know going into makeup. It’s material knowledge, of what you use with what. That’s pretty much it.

What would you say to other teenagers who are interested in getting into this field?

I would recommend for anyone who is passionate about something that they love to do, to continue doing it, if it makes you happy. Stick with it! When I started doing this, I didn’t hang out with friends, I didn’t go out to parties and all that. I stayed in and stayed focus. And when it comes to getting into effects [makeup], I would recommend starting with the basics, like making cuts with tissue paper and all that, because that’s pretty much where it starts out. Stick with it. Just do what you love! ♦