The Tuts: Do I Have to Look for Love?

A video premiere, plus advice on anxiety. 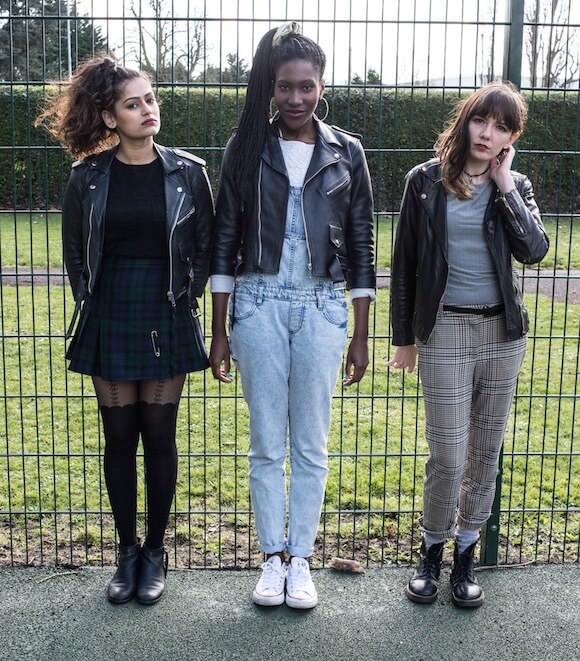 The Tuts are an all-girl punk trio who write melodic, super catchy anthems about love, what it feels like to be a girl, and life’s everyday pressures. The bands’ members, Harriet Doveton, Beverley Ishmael, and Nadia Javed, keep it real: They sing in their very own English accents and homemake their shows and videos.

As you might guess from that intel, the Tuts are not afraid to get intimate with their audience. They’ve become known for ditching the stage and playing while surrounded by the crowd. They’ve also performed on larger, more formal stages, like the UK’s Glastonbury Festival. In the past, they’ve supported Rookie’s ol’ pal Kate Nash, and soon they’re heading off on tour with ska legends the Selecter.

Watch the premiere of their video for “Do I Have to Look for Love?” right here:

I rang up the London trio for a late-night Skype session to talk about YouTube, anxiety, inspiration, and the importance of speaking up.

NILINA MASON CAMPBELL: At the gig you played for Parallel Magazine, you performed with the audience surrounding you. Was there a stage, or did you choose to perform that way?

HARRIET: We just went into the crowd.

NADIA: We crowd-invaded. They just formed a little circle around us. It was really cool.

Do you often do that?

NADIA: It isn’t staged. We don’t do it at every gig—only when we feel the vibe of the crowd.

HARRIET: Sometimes we do it if the crowd is a bit stiff. When there’s loads of men with their arms crossed, we go into the crowd to try to get them out of their shells.

That reminds me of how the Clash liked to perform without barriers between the band and the fans.

BEVERLEY: Yes, we actually cover one of their songs: “Rudie Can’t Fail.”

You’ve been on tour with Kate Nash and you play on circuits with all-girl or female-fronted punk bands. How do they influence you?

HARRIET: Kate Nash’s newer music is more girl-gang/feminist. She’s really outspoken on stage, so even though we were already a bit like that, I think her performances encouraged us to be more outspoken and sing about feminist issues.

NADIA: I think we rubbed off on Kate and Kate rubbed off on us. She makes speeches between each song as part of her show. We’ve taken that on, too. Being on stage gives us an opportunity to voice our opinions about politics, sexism in the industry, and what we’re experiencing as a band. And we did the whole stage invasion, and now it’s had a domino effect, and Kate does it at her gigs, too.

What kinds of issues are important to you as a band?

NADIA: In our smaller, more underground punk scene, there are lots of women and female-fronted [bands]. It’s more equal. But in the mainstream [music scene], there aren’t enough female bands, or female-fronted bands. People try to say that’s because there aren’t enough girl bands out there, but there are. They’re just not given the same chances. 90 percent of the boy bands we’ve played with have got management, labels, and backing. Whereas girl bands like us are DIY, independent, and doing it ourselves.

BEVERLEY: Even though we’re playing on the same stages as they are, they’ve got all these benefits we don’t have.

NADIA: To get onto that higher platform, to get onto the mainstream festival slots, you need a booking agent and label.

HARRIET: Even the smaller labels will say, “Oh, I’ve already got a girl band or girl-fronted band on my label, I don’t need another one,” as if you can only have one!

So you want to stay independent for as long as possible, but then sign to a label if the right opportunity presents itself?

NADIA: We still work our day jobs, and that’s what’s annoying. The boy bands can live off their bands, but the women, we’re having to work extra. That’s what’s happening in all areas of the economy with work-life split and women not getting paid as much as men. It’s happening in the music industry as well.

HARRIET: In our current situation, we’d either have to be signed to a big label or just carry on as we have been. There’d be no point to our signing to a small label because we’re essentially a label ourselves. It’s a go hard or go home kind of thing. The decision now is: Should we try and make our own label and run our own business, or should we try and get signed to a big label? We’re not sure.

When you started the band, did you imagine it becoming a business that you’d have to run?

BEVERLEY: Not at all. We started the band when we were 14 and 15 years old, so seeing where we’ve come from to where we are now, I’m like, Oh my God! When we meet people who might be able to give us advice we ask them so many questions, because we’re hungry—we want information about how to take the band to the next level.

NADIA: “It’s not about what you know, it’s who you know”—that saying is really true. If you have the contacts, you’re in. We ended up playing Glastonbury Festival because Kate Nash got us backstage at one of her gigs, where we met Billy Bragg, the organizer of the stage. We gave him a CD, and that was it: That’s how we got on at Glastonbury! Then, Pauline Black [of the Selecter] saw us play at Glastonbury, and now we’re touring with the Selecter. It has this snowball effect.

How integral are your DIY visuals to what you create?

HARRIET: YouTube is a perfect way for us to show fans more of our personalities and show them that we’re normal, with flaws.

NADIA: We make videos where people can see us when we’re just us. With no makeup, in our tracksuit bottoms, leggings, our thermal vests, our visible panty lines, and acne scars.

HARRIET: On social media, you see people through filters—always looking beautiful. I don’t want our fans only to see that. I want them to see everything that happens behind the scenes. It’s part of the story and part of the journey.

BEVERLEY: When we do a show we are pretty dolled up, so I don’t want them to just think it’s all glamorous. It’s not.

HARRIET: I watch YouTube as a way to wind down. Even just [by] watching people’s daily vlogs. I like watching vloggers’ daily lives: I guess it’s why people like programs like Big Brother. There’s one vlogger in the UK called Tyrannosaurus Lexxx. She talks about a lot of feminist issues, and she’s really witty. In the U.S., there’s Andrea’s Choice. And we all watch Russell Brand the Trews.

The song “Worry Warrior” is about anxiety. Why did you choose to write about that particular issue?

HARRIET: That was the first song I wrote when I joined the band three years ago. I’d never written a song before, and it was really nerve-wracking. I have anxiety, and the lyrics are, “I’m anxious, and I’m aware that I’m anxious / And I’m worrying all the time.” When you’re feeling like that, it makes you feel like a weak person, but in other ways, I feel like I’m a really strong person: It’s about that conflict. There aren’t that many songs about anxiety, and it just felt natural to write about it.

How do you have deal with your anxiety?

HARRIET: I’m still working on it. I do yoga, and I try to turn off all of my gadgets two hours before I go to sleep, which helps. Sometimes you’re lying in bed and you’ve got so much stuff going through your brain, and social media is just adding to it. So I have to turn it off, get away from it, and just watch a TV show. That’s how I deal with it at the moment. Eating well, doing yoga, and the occasional reality check. Perspective is the biggest thing.

How did the band get together?

BEVERLEY: We were pretty much in the band before we even knew how to play instruments. We were that keen! There were drum lessons going on at our school, so I started playing drums. We did drum lessons together and then Nadia got a guitar. We had a friend who knew how to play bass. She left and then Harriet joined.

NADIA: A lot of girls tell us, “Oh, I want to be in a band, but I don’t know how to play an instrument.”

NADIA: Just pick it up, go online, get some tabs. There are so many videos on YouTube. Back when we started playing YouTube wasn’t as big, so we used to print tabs in our school IT lessons. Use the free printer at school. Just do it and don’t be afraid. Most songs are only three chords.

How do you find time to be creative despite having day jobs? Do you have any tips for dealing with feeling totally drained after work?

HARRIET: Don’t ever put yourself down when you feel like you’re not doing enough, because you will have a spurt where you’re doing loads. In terms of creativity, there’s so much you can do yourself nowadays. Even recording your own demos on your laptop or your phone, doing designs for your EP cover, doing your own photoshoots…you can do so much! Our first EPs were made from cereal boxes. People won’t be like, “Ew, a cereal box, ugh.” They’ll find it charming!

NADIA: And keep reading books, poetry—whatever it is that makes you feel inspired.

What inspires you, besides girl bands and other female musicians?

BEVERLEY: I recently read this book called Bad Feminist by Roxane Gay. She’s amazing. I haven’t read that many women of color writing about feminism, so it was really inspiring to write about race and feminism, hand in hand.

NADIA: I’ve got ADHD, so I find it hard to concentrate with long books, but when I do get the chance, I like reading. I like listening to music. I love Pete Doherty. I love him. I do a Google News search on him every day. ♦