Shoplifters of the world, unite and…go to Mall Jail.

No, No, No: A Guide to Girling Wrong 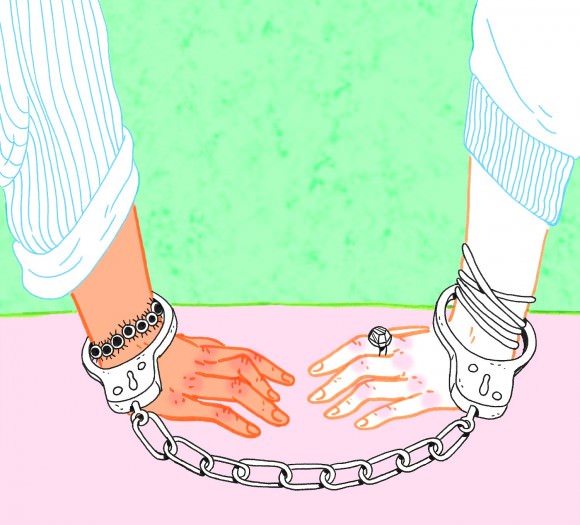 By the time you get this letter, there’s a very good chance I’ll be dead. OK, well, not dead, exactly, but definitely grounded for the remainder of my days on this cold, dumb planet. It is also possible that I’ve spontaneously combusted under the pressure of two legitimately terrifying how-could-you speeches doled out by my parents, who are currently on their way to pick me up from my current location: Mall Jail.

I don’t know if Mall Jail is something one capitalizes, but everything seems so serious right now, that I think capitalization is warranted. I can’t believe my life has come to this. I don’t even know what came over me, really. I started the day with a craving for an Auntie Anne’s pretzel and a therapeutic gloss stop at Cosmetica, and now I’m here, at a conference table in the security office behind the food court, writing to you longhand because they’ve confiscated my phone. If I don’t do something with my hands I’m going to start biting all of my nails off, which would be too ironic to deal with—I mean, I got here by stealing some nail polish.

Ugh. I know. I’m a criminal. A petty thief. Mall scum. And to top it all off? It’s not even a good color—just some crap green glitter stuff that, had I the chance to actually use it, probably would have made me look like I was suffering from a fungal infection caught from Tinker Bell. You don’t know true shame until a security officer asks you to confirm that you did, indeed, pocket a bottle of “Jade in the Shade.” It would have been less embarrassing to talk about constipation or hemorrhoids or honestly any other kind of excrement-related business. Not that this isn’t shitty.

My brain is moving so fast. Faster than I remember it ever moving before. When I walked out of Cosmetica and the alarms started ringing, I momentarily thought I’d won a prize, even though I was well aware that I had stolen goods in my pocket. When the security guard took my arm and told me he was going to escort me to the “Guest Relations Office” (Mall Jail), I just stood there listening to the alarms ring and waiting for someone to congratulate me. It was like my hands had stolen the nail polish, but my brain didn’t register it—like my brain was on some other planet where everything was all right and passersby at the mall weren’t making stink faces at me because of my suspect behavior. I froze.

“Miss,” the officer said, breaking my spell. “You’re going to have to come with me.”

That was 45 minutes ago. I’ve been sitting here ever since, trying—and failing—to explain myself. The officer asked me a million questions: Why did I take it? Was this a pattern? Did I know that shoplifting is a crime punishable by law? Did I know how lucky I was that the store manager refused to press charges as long as I paid a fine and agreed to never set foot in the store again? Did I have anything to say in my defense?

“I don’t know,” I said. “No. Yes. Yes, can I thank her for that? No, not really.” (I didn’t ask if I was allowed in any of the other Cosmetica stores across the nation because I have a feeling the answer is no and honestly my heart can’t take that knowledge right now. Do you have any idea how many eye shadow palettes I had to buy to gain Cosmetica Ultra Shopper status? Ugh, my heart.)

I wish you were here. You always know what to do in situations like this. I mean, you would have avoided a situation like this altogether. I don’t know what’s wrong with me these days. It’s like there’s a stranger operating the controls of my brain, pushing me to do things that I know I’m not supposed to do. Who steals nail polish? I do, I guess. The New Me does. This is who I am now: The Glamburglar.

My mother is going to be so upset, and my father probably won’t even talk to me. I know they’ll bring up college applications and permanent records and all of that crap, and I know the word “disappointed” will be thrown around at least four times, and my stomach is already churning at the thought of it. Maybe I should make a run for it, you know? Live out the rest of my days as a fugitive from Mall Jail, making friends with stray dogs and cats.
“It was the five-finger discount that did me in,” I’ll tell the dogs and cats as we watch trains go by and tumbleweeds float along the streets. I’ll make a pair of pants out of aluminum cans and start calling myself Shady Jade, after the hideous color that sparked my criminal lifestyle.

Or maybe I’ll just stay here and suck it up. I haven’t had enough time to think about it yet.

Since my capture, I’ve been sitting in silence, writing to you, because the officer doesn’t have any more questions. Even if he did, I don’t think I’d have any good answers. I’m not sure what I’m going to say to my parents. I wonder if they ever screwed up when they were my age. I mean, probably, right? The ’80s were a weird time. Based solely on the hairdos I’ve seen in their old pictures, I’d say they weren’t always the best decision-makers. But it sucks to let them down.

I don’t know. Do you ever have these feelings? Like, you can’t help but do something you know is wrong, because you want to make sure that you’re still living? It didn’t even occur to me that I’d get caught. It was like being in a daze—like being hypnotized by the idea of breaking the rules. For a few seconds, I felt super powerful, invincible even. I guess that’s why it shocked me so much when those alarms went off. It was like the sound of the universe saying, “Nope, nice try, but this isn’t the life for you.”

Oh, man. I can hear my mother’s voice in the hallway. This may be the last letter I ever write. Please remember me. I’ll be 85 and still locked in my room: the oldest living grounded person in North America. And I’ll look like garbage because I’m forever banned from Cosmetica. What a world. What a world!

I can’t breathe. I found your note in my locker this morning and I’m two HEARTY CHORTLES away from having to ask Mr. Reston if I can leave study hall to go get my inhaler. It is that bad. You’re a mess and I love you. I am deeply honored that you chose to write to me from Mall Jail, when you could have written to anyone, like Iyanla, for example, who would, as her show title promises, at least try to fix your life. But you chose me, and for that, I am honored and possibly on the brink of a laughter-induced asthma attack.

So that’s what happened to you yesterday?! MALL JAIL?!!?!?? I thought it was weird that I hadn’t heard from you all afternoon since you text more than any person alive. I figured maybe your phone had died, or your charger was broken AGAIN or something, but I didn’t for one second consider that you might just be a brazen criminal who got caught by Paul Blart for stealing Jade in the Shade. (It’s actually a good color for toenails, did they let you keep it? Probably not, right?) And now you’re banned from Cosmetica, which is pretty much the worst thing that’s ever happened to either of us, because now who is going to go with me to play “How Many Perfumes Can I Sample Before I Lose My Sense of Smell?” Callie? You KNOW she quits after one spritz because “everything smells like floral insect repellent.” No fun!

I guess this explains why you looked so bummed in the hallway this morning. I saw you walking into bio and you had the same look on your face that you always get when the cafeteria sells out of M&M cookies before you get there. Quelle tragique! I was worried that maybe something serious had happened. And now I’m laughing at your Confessions of a Mall Jail Captive, which makes me feel kind of bad at this point, because you really do seem freaked out. Dude: IT IS NOT A BIG DEAL. OK? Your life is not over. Your Cosmetica Ultra Shopper status: probably over. But your life will definitely continue. (Also, GlossFix is getting way better than Cosmetica anyway, so don’t panic—our adventures in beauty will continue.)

Were your parents really hard on you? They’re probably scared more than anything. My parents always freak out if I do anything that seems “off the right path,” unless I give them a thorough and logical explanation of my behavior. Remember when I put that green streak in my hair in seventh grade? It required a two-hour presentation on my part titled, “Why Green Hair Is Important to Self-Expression.” So exhausting. But they mean well, in their own overprotective way. They’re always saying things like, “We just want to make sure you’re OK.” Which, I mean, then ask, right? It would save me a lot of the time and aggravation of putting together heinous PowerPoint layouts.