Being yourself is hard when your family has a different idea of what that means. 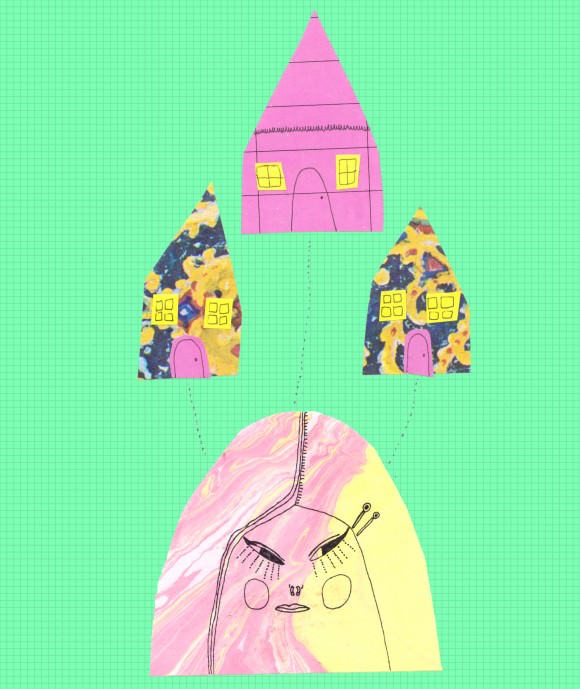 My senior year of high school, my parents found out that I wasn’t me. I wasn’t their Katherine, someone they liked to call “baby girl” and “shug,” or the frumpier “sis,” a modest and quiet girl who spent most of her time working, studying, reading, or going to church and youth group events. Well…it’s not that I wasn’t those things in certain ways—just that I wasn’t as simple and sweet as that understanding my parents had of me. Often, my only interactions with my parents involved their calling me a pet name, my confirming that I had done one of the aforementioned activities, and then my going off to be a real, three dimensional person somewhere else.

Like many teenage humans, I wasn’t always socially or academically successful. Sometimes I was dissatisfied with myself, my schoolwork and activities, and my life in general. By reading diary entries I wrote online for Rookie, my parents found out that my personality was broader, my successes more tempered, and that I had larger, more difficult human emotions than they were used to—all of which I had previously hidden under modest sweaters and a work ethic and dedication to extracurricular activities that kept me out of their sight most of the time.

Because I’m so secretive and never shared much with my parents, I hadn’t wanted to tell them about the diaries, but they were required to sign a consent form for me. Since they were excited that I was being published, they read the column every week…and discovered, in doing so, that I didn’t believe in God, talked back to teachers, brooded constantly about my religious school, and often had feelings that were more intense and abrasive than anything they had seen at home. Soon, the Wednesdays that diaries went up ended in awkward dinners where my parents seemed either more concerned about how I was feeling, or reluctant to talk at all.

All these revelations about my interior brain were met with tears, fighting, or subtler forms of resistance and disapproval, like not being as responsive to my questions and conversation as they were to my brother. Learning that I was sometimes sad or dissatisfied seemed to mean, to them, that I was unappreciative, resentful, and unnecessarily tragic—I think they felt as though I blamed them for the times when I was unhappy. My mother has confronted me out of a mix of concern and resentment, asking if my sadness came from depression (and why wasn’t I doing anything about it, if so), or if I thought it was somehow my parents’ fault. I would reply with frustrated remarks about how it wasn’t their fault, and how I didn’t feel that bad or that sorry for myself. Then I’d generally get away from her as fast as possible and keep my distance after.

My diary entries warranted not just fights, but exaggerated pity. I received birthday gifts from my grandmother of books of quotes on finding joy or hope that were sort of thoughtful, but mostly felt like being covered over with a candle-snuffer. When I tried to wear a see-through top out of the house, I ended up in a shouting match with my mother before being forced to put on a button-up. (Don’t worry—I sneakily kept the top on UNDERNEATH! Such a rebel, I know.) When she walked in on me watching a show with a sex scene, she declared it porn, and we fought about the kinds of sordid stuff I watched—and how I wanted to flaunt my different values in their faces. But I was just trying to be myself: I wanted to lazily watch TV instead of pretending to be studying or reading in my room, talk about my topics they found quirky or baffling (like the ways lighting, posture, and clothing can dramatically shade or alter an interaction, or how the world sometimes became de-familiarized and eerie to me), and discuss problems I was having, like how I felt that my high school mentor had started to slight me both because he knew I didn’t believe in God and because he had a preference for giving time and attention to his male students over his female students. All this only seemed to confuse and frustrate my family. The simple act of living around my parents began to feel like stuttering. When I was around them, I couldn’t get out even one sentence of just what it felt like to exist.

I wasn’t very wild, and my parents weren’t overbearing, but trying to form an honest relationship with them felt so fraught that I totally disengaged from them at times just to find some relief from the sheer effort of it. It scared me when my mom confronted me in tears about my atheism, and I was overwhelmed by the stress of trying to keep any level of engaged conversation going when it felt like even the way I spoke pushed against their sense of propriety. Some of it was because of how they reacted, and some of it was fear I based on even subtle or potentially falsely perceived reactions. My mother’s teenage upbringing and tendencies were so different from mine. She lived in a small town and socialized in a more consistent, but less structured, way. She focused more on religion, appearances, and exploring her community outside of extracurriculars than I did. That caused a tension between us, so it seemed easier to just not talk to her instead of trying to bridge the gap between our habits, age, upbringings, and language.

I regret not easing my parents into knowing me. If this sounds familiar: Talk to your parents! Seriously! If telling them everything you’ve ever felt ever is as scary to you as it is actually unreasonable and unnecessary, start by telling them banal things occasionally, like when you’re stressed about an assignment, want to see a movie, or if a teacher did something weird in class. Literally ANY boring or commonplace piece of information is helpful in encouraging more interesting or more connected dialogue in the future. It also creates context and understanding for when bigger disagreements or issues arise.

Parents are a little like grizzly bears: Move slowly around them, and they will remain peaceful and calm. Move quickly, or antagonize them, and they ATTACK. If I had once or twice hinted at a bad day at school, or lightly complained of a trend in administration’s behavior, BEFORE they read my diary entries about it, my hatred of my school might not have come as a shock.

I also could have been more aware of my parents’ boundaries through testing their responses to ideas and personality traits, or by learning about them by asking questions about their opinions. In high school (and now), I didn’t think that reading about anything that could possibly be considered bad or amoral was bad or amoral, or that writing about untoward subjects meant that the author condoned the actions in the book. Once, when I was 16, I set a book titled Memories of my Melancholy Whores on the kitchen counter in front of my mother while I got a glass of water. She read the title and became infuriated. Not only did she not think this was proper reading material for me, but she assumed that there was something inherently immoral about the subject matter for any audience, and was furious that I would try to read that. To prevent that huge fight, I could have previously started discussions with her about racier or morally complex stuff we were reading in school, and my schoolmates’ and teachers reactions to it. (And if she had reacted poorly to those, then I could have made sure to hide the book.)

While I do love my see-through crop top, I compromise on what I wear, because I’ve always found that dressing in church clothes around my parents makes their responses to my opinions less reactionary. Looking whatever your family’s definition of “put together” is can help you express your personality with fewer hitches—it might earn you more of their respect. If you dress like Lane Kim, your parents will probably maybe have less of a clue that you, like, eat junk food, cuss, and, most scandalously, worship DEVIL MUSIC, just like her character on Gilmore Girls. On the other hand: If your parents are less sartorially conservative than mine, looking more like you feel inside (I am SO SORRY for the cheesiness, but I kind of need to speak “uncool parent” here, since I AM trying to bridge the communication gap between you and them) might give you the confidence you need to negotiate with them. Again: Test the waters and figure out what’s best for you.

I don’t like being told to pick my battles—I usually feel like my battles are all equally important. Even if they’re small, they’re tied to larger ideals or potentially bigger battles. Instead, I recommend doing what you can to end a fight peacefully without relinquishing your values, then discussing your needs and opinions more clearly when you’ve both calmed down. I can’t guarantee that it won’t lead to further friction, but asking how your parent feels about a fight later and clarifying how you feel can be helpful. A few days after a fight my mom and I had after I expressed a general dislike of kids, I brought up how my anxiety about feeling pressured to plan for having my own children—when I know that’s not what I want at all but might reconsider in the very distant future—makes me complain about kids when I have to be around them. My mom explained that she thought my behavior meant that I hated a young cousin I took care of sometimes, and I got to tell her what I was really thinking. She wasn’t totally happy with that, because she still knew that I’ve mostly made up my mind to not have kids some day, but we now both have a working knowledge about how we see the issue, and changed our actions to respect each other better, which couldn’t have happened if we were yelling or crying. Once again, slow progress wins the day.

Being around my parents still feels super weird a lot of the time, but since I started to give them information about the daily events and past experiences of my life and asking them about their own over the past few months, it doesn’t feel like stuttering anymore. We have actual conversations now, and although they aren’t always perfectly attuned to one another’s feelings (which would be a majorly difficult level of comfort and understanding to achieve in any relationship), our interactions have become more fulfilling. We’re all becoming more and more honest, empathetic, and kind—which is what happens when you decide not to keep quiet about who you are, and your parents decide to actually listen—and vice versa. ♦