I keep you in mind when I think about my future.

How to Tell Creepy Dudes to Leave You Alone 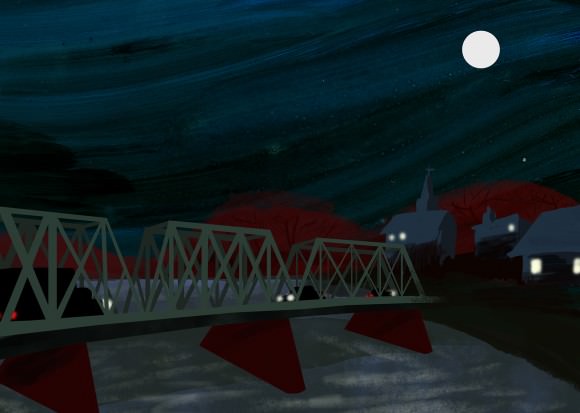 The first boy I slept with tried exactly one nice thing: When I ran down his tiny hallway to the bathroom to throw up, he clambered after me, drunk as I was, and said, “I’m going to hold back your hair!” He was excited about it, suddenly animated and high-pitched, like a kid in class not used to knowing the answer. Like, here was a move he could finally pull off. What a dolt. I don’t want you around when I’m barfing.

You. I’m nervous about seeing you on Thursday. For one, I have just graduated, and you are still in high school. For two, I am a transsexual, and while you know this and never mention it, some people aren’t as bad as hair-hold-boy at pretending to be nice (pro tip: If you really have to say, “I’m not a fag,” don’t say it with your dick in my mouth). For three, you don’t drink, and I am not used to seducing boys sober.

Yesterday at work, our shifts overlapped. I was unpacking a box in receiving. You were getting an order and eating a muffin.

You: I don’t want to go back out there.
Me: Give me a bite of your muffin, and I won’t tell anybody I saw you.
You: I could hide here.
Me: Forever.
You: At one with the shelves.
Me: A store poltergeist.
You: How would I eat?
Me: Ghosts don’t eat.
You (serious and considered): Hm. Right.

And then you left and I watched your perfect ass disappear through the door, and then I leaned into the counter. I never think about having sex with you right away. I don’t even register I’m attracted to you until we’ve been talking for a few seconds—and then your eyes bounce where other guys would laugh and you move a lock of hair from your face. And then your shoulders are moving up and down with mine and our fingers slip out of their basket-weaves from the sweat. It’s distracting.

I like that we work together. I get to see you without having to plan it. You’re still in school so maybe that’s still normal to you. But I can’t count on randomly seeing people anymore. I have to make an effort. It’s awkward. It’s weird. It makes me nervous, and I don’t like it. It’s better when seeing your friends is out of your hands. Some days I don’t see you at all. Some days I see you four or five times. I like that.

You have an ex. Her name is Marni. Everyone at school thought she was a bitch but I liked how she wasn’t afraid to talk shit. You’re both still friends. Word gets around, I know you’re a virgin. I have no exes; I’m not a virgin. I imagine us as balanced, and sometimes this comforts me, but it’s only sometimes.

We might be watching a movie on Thursday? I know we’re hanging out and I know your parents are never home.

A few days ago we were both eating lunch in the break room. I was having a bad day. You were playing a game on your phone. You stayed playing a game on your phone. You didn’t look up at me, not once, not when I said, “Hey,” not when I said, “How are you,” and not when you said, “I’m good.” I stayed there for 10 minutes, until we had to go back out, waiting for you to say something, to notice that I was hunched in a corner, that I wasn’t actually eating, that I was in the break room in the first place, which I never am, to at least say something more than “I’m good.” But you stayed on your phone, and then you left without saying a word. You didn’t look at me. You didn’t look at me once. And now you’re texting me, inviting me to come over and watch a movie?

I wonder what you know about me. I get paranoid about my reputation. Maybe too paranoid. It’s like my sister says: Lots of people don’t actually care enough about you to gossip hard, one way or another. And I don’t count as a girl to a lot of them, anyway. Here’s a fun story, maybe: A couple weeks ago after I gave you a ride home (you didn’t ask, I love that you never ask) I drank a bunch of vodka in my room then walked over to sneak into the Alibi. But everyone there knew me from the last few times, so it didn’t work. Which is OK. There are other bars. When I walked out, I saw my buddy Tim, working the street for change. Older guy.

“Lorena!” he said. “Sweetie, I haven’t seen you for so long.” He kissed me wetly on the forehead, then the cheek, but that was it. He knows I’m young. We sat together and talked. Mostly he talked. He’s got a kid back East trying to graduate. Said he was getting out of this town soon, before it got cold again. It was busy outside the bar, and some other kids ended up hanging out and drinking beside us. One guy gave me some beer. He was pretty in a gentle and clumsy way: Long hands and big frizzy hair. He spilled beer more than once or twice. And I liked his hoodie. It was the color of ash.

“Hey, Lorena!” Tim said when he saw me leaning against him. “You watch out for that one, he’s no good. He brags. You want me to give him a boot in the head, it wouldn’t be the first time.”

You know how it seems like a person is kidding, but halfway through you realize they’re serious?

I like Tim. He reminds me of my dad. Merry and degenerate. In another life, the two of them would get along.

This boy with the hoodie, he was probably older than he looked. I’d seen him around here before, playing guitar sometimes. He popped open another beer and told me to drink. I like having my fun, but I’m smarter these days. I took a sip and handed the can back to him. “I’m gonna go home now.” Tim walked me down the block and kissed me goodbye, once on the forehead and then the cheek.

When I walked over the bridge back to my house, I felt fuzzed and manic and at peace all at once. I waved and blew sloppy kisses at every car that went by. I wouldn’t have actually gotten into one. That’s not what I want anymore, but—I dunno. Some cars honked. One guy did stop—middle-aged dude. I told him to go away or I’d call the cops; he turned pink as a rose and sped off. Should I feel bad about that? It was funny. I wonder if you would find something like that funny. I wonder if you’re one of those good boys who has a wild side in waiting, or if you really are just a good boy and that’s all. I’m not sure if I care either way. Maybe I do.

I can’t stand thinking about you and I together so much—not even just in the gushy way, but as a possibility. Like—I keep you in mind when I think about my future. I can’t stand it. Other girls say I’m lucky because I must know how boys think. Whatever. I know just enough to be even more confused about them. And what boys think about me—I’ll never figure that out. There was a day, a year ago, you sat in front of me at an assembly. (Your hair was down to your motherfucking ass back then. I like it now, shoulder-length.) Marni wasn’t around. You had a white long-sleeved shirt on under a black short-sleeved one. The assembly was about rape. You listened. I noticed.

You’re the one who wants me to come over on Thursday. I like you so much. I don’t understand anything. I don’t. I’m going to kiss you, I want you to know that. I’m going to lean over and touch your shoulder at some point, and if you look at me for more than a second, then I’m going to kiss you. It will be awkward and you’ll want me to leave right after, and then this thing with you will be over—it will be so wonderfully over. I like you so much, and I will get one kiss. I know how these things go. One kiss, and then I’ll see the shock and drop and fear in your eyes. I can’t wait to wake up Friday and know for sure that you don’t see me like that, and I won’t think of you as a possibility anymore. I know the joy in knowing it’s over. That thought makes me happy. That thought is a happiness that’s possible, and real. That thought will let me kiss you, and I couldn’t do it any other way. It’s so hard to explain that there are things in my past I don’t feel good about, but neither do I feel ashamed. I know how it works, don’t tell me I don’t. I will see you Thursday. I wonder what movie you will pick. ♦

Casey Plett wrote the short story collection A Safe Girl to Love and a column on transitioning for McSweeney’s Internet Tendency. Her stories and essays have appeared in Plenitude, Two Serious Ladies, Anomalous Press, and other places. She is on Twitter.