Milo Greene: Lie to Me

An interview and video premiere with some serious multi-taskers. 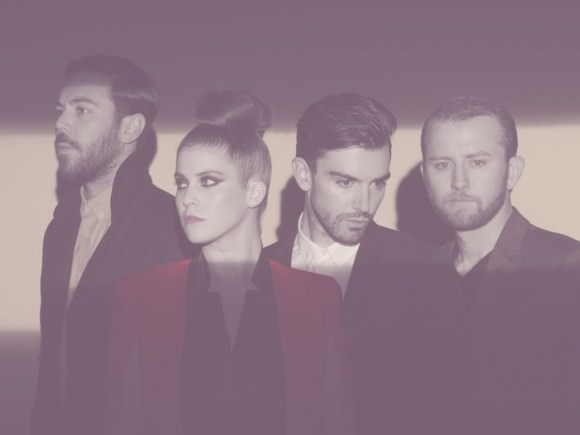 Having four people equally share vocal, instrumental, and songwriting responsibilities in one band must be difficult, but Milo Greene makes it look and sound effortless. Three years after debuting their self-titled album, Milo Greene just released Control, a record that is even more gorgeous and harmonious than their first. We are so excited to premiere the video for its latest single, “Lie to Me”:

Marlana Sheetz, Robbie Arnett, Graham Fink, and Andrew Heringer, the band’s original quartet, were joined by Curtis Marrero on percussion for Control. They all took some time on the day their album was released to talk with me about the band’s namesake, Big Star, and learning to compromise.

BRITTANY: What does the video for “Lie to Me” mean to you?

MARLANA SHEETZ: It’s fun for us because it’s the first official where you can actually see us. As far as the last record goes, every video was a narrative, and you didn’t see us except for a few cameos. This one will be the first saying, “This is who we are and what we look like.”

How does it feel to finally have the album out?

MARLANA: Like having a child. It’s very painful, and then it’s finally out, and you’re like, “Yesssss!” I wouldn’t know, though. I haven’t had any babies. That’s just what I hear.

I saw on Twitter that you guys were listening to Big Star, a band I really love. Favorite song by them?

ANDREW HERINGER: It’s gotta be either “Don’t Lie to Me” or “Thirteen,” depending on my contrasting moods for either rock or ballads.

ROBBIE ARNETT: I’m going to say “Don’t Lie to Me,” since we’re premiering the song “Lie to Me” on Rookie!

What else has been influencing you guys lately?

ROBBIE: We’re all influenced by a lot of different stuff, but we come together on some key bands. The latest War on Drugs record is a reference that we all really love coming back to. We are fans of Jessie Ware. There are some local bands that we’re really enjoying, like Mini Mansions. And then the classics…like Big Star!

I love the concept behind your band name: creating this fake booking agent named Milo Greene, then adopting that as your official name. Who was Milo, as a character in your collective head?

ANDREW: When we first started the band, it had been kind of an inside joke to us for years that we had this booking agent named Milo Greene. There was just something about that name that stuck; it resonated with us. It’s been a marker for the band: The name of the band is one person’s name, even though it’s four songwriters, four singers, four people trying to come together to create one cohesive thing.

Did “Milo” actually book shows for you?

ANDREW: Yeah! Back in college, we realized that booking shows under a different name often got a better response other than, “Hi, I’m Andrew, and I’d like to play at your venue.” Milo Greene did a lot in little ways for us, so it’s kind of like paying him back.

In a lot of your interviews, you all talk about “control” as an ethos that you all share musically. In a band that’s so much about balance and sharing responsibilities, how do you practice giving up control?

MARLANA: We’re still figuring it out, to be honest. It’s not easy. We’re not going to lie about it. It’s difficult to have four people sharing all these roles. As long as we stick together, though, it keeps the ball moving.

ROBBIE: Since each of us are songwriters with different backgrounds, when we are initially coming together we might have different thoughts or different formulas that we like to use when writing a song. If it creates tension, then that tension really helps turn the wheel and ignite the best from one another. With the conflict comes added attention to detail—a great reward. With Control, that was really present. It was nice to have that interaction with one another. It wasn’t, “Yes, yes, yes,” all the time. It’s nice to be critical with one another. We’re very comfortable, so we can be brutally honest, since we’re all trying to help one another get that song.

Is there a song from the album that sticks out as having had a particularly contentious creative process?

MARLANA: Maybe “On the Fence”? For a long time, it was difficult for everybody to agree on which way to go with the chorus. We started that song the early stages of making the album and didn’t finish until the late stages. It took a long time to get everybody’s heads wrapped around it.

What’s the best advice you can give for being in a band that’s all about collaboration and everyone giving equal parts?

MARLANA: The key is to find other people who are strongly driven and dedicated. The hardest part about a band is keeping it together. You gotta find people who are willing to dedicate all their time and all their energy to it. You have to find people you can trust and rely on.