Trust Your Gut: An Interview With Marina and the Diamonds

The singer-songwriter doesn’t care about being a “good” musician. 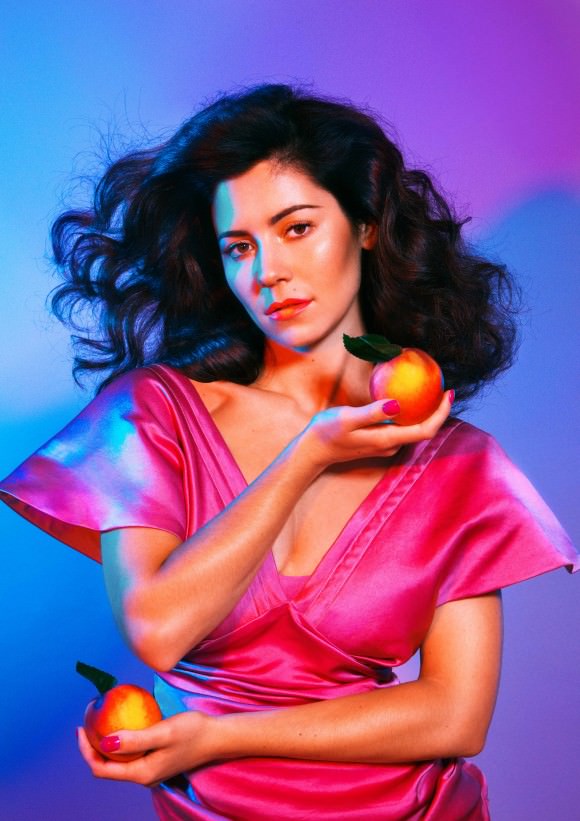 Marina Diamandis, the Welsh singer and songwriter also known as Marina and the Diamonds, is the queen of reinvention. She made her pop debut in 2010 with The Family Jewels, and in 2012 released the ambitious concept album, Electra Heart. It stars a super-glam character of the same name, embodied by Marina, who comments on female pop-culture archetypes (housewives, Hollywood starlets, bad girls, et cetera): “I’ve lived a lot of different lives, been different people many times,” she sings on one of the album’s tracks, “Fear and Loathing.”

After spending a few years talking about and being Electra Heart, Marina put the character behind her, but that doesn’t mean we’re any closer to knowing the “real” Marina. She once told an interviewer that she “wouldn’t want to spoil someone’s opinion of [her] by them knowing [her] as a person instead of an artist.” We know her because of how she executes her ideas—the things she makes for the world to see and hear.

In April, Marina will release her latest album, Froot; last week, I got the chance to chat with her about self-expression, playing a character, and sticking to your guns.

BRODIE: There was a really high concept behind your last album, Electra Heart. What approach did you take to making Froot?

MARINA DIAMANDIS: I approached it very simply. I didn’t really have a conscious plan for what I was going to write or what the album was going to be like. I think I was just really relieved to do things in an uncomplicated way. With Electra Heart I still feel very complex [feelings] about it, because there were so many things that I loved about it that were positive, and there were certain things, artistically, that made me realize what I didn’t want to do, what kind of artist I didn’t want to be. So [making Froot] was almost repositioning those realizations.

What were those realizations?

In terms of visuals and the music, [Electra Heart] was exactly what I wanted, but I think it was more the fact that it wasn’t a true reflection of me. That was something that I was very open about. I wouldn’t have bothered to create a character to tell the album through if it had been 100 percent expressive of myself as an artist. That was part of the concept, but I think that was very affecting for me creatively, because it’s almost like going around and people thinking you’re this one type of artist, when you’re actually something completely different.

Electra Heart made me think a lot about how, when female artists create characters through which to express themselves, it’s often perceived as being fake or phony. As opposed to when men do it, and are often heralded as being brilliant and mysterious. Did you encounter those ideas while making that album?

Yeah, for sure. It was something that I encountered, probably because the type of production I had was very much like electropop. I always think it’s interesting because people say with Froot, “This is your most HONEST album” and I think, No, they’ve all been honest! The lyrics have actually not really changed hugely in their tone since the start, so I think Electra Heart was very brutally honest, but I guess because you have these other layers on top of it, people may have not seen that.

Have you ever thought of your stage name as a character in and of itself?

Not really, no! Particularly not now: I feel very chilled out about that aspect of myself at the moment. I don’t see a huge separation from Marina and the Diamonds, and Marina. Or like, being seen with a full face of makeup on, and then not being seen [with makeup]. I think Electra Heart made me go the complete opposite way, actually. It’s quite a relief to feel like, Yes, I may be an artist, but I’m a normal person. And I like to perform. The end.

You’re not a technically trained musician. Has that ever made you feel like a bit of an outsider, or like you have to work harder to prove yourself in the music industry?

No, because I don’t have an interest in getting better! When I play keyboard, I do it because I need it as a songwriting tool. I’m not a musician who necessarily gets super excited to play a beautiful piano or a beautiful trombone. I don’t really connect with music in the way that a more traditional musician would. I’ve never been geared that way; I’m more geared towards melody, the timbre or tone of a voice, and the lyrics are the number one thing. I’ve never felt insecure that I, like, can’t play the piano properly.

I’ve heard you talk quite a bit about having synesthesia. How does it manifest itself in your work?

A lot people think that it’s something you experience day-to-day, or is a very strong sensory feeling. But it’s not for me; it’s more of an added sensitivity to color, so I associate a lot of different colors to musical notes or days of the week. That’s how I experience it, but maybe it’s different for other people.

As someone who doesn’t have it, it sounds like a superpower almost!

I know! I think people think it’s, like, this amazing thing where rainbows are popping out of your eyeballs! But…no.

Do you get kind of sick of answering questions about it and explaining what it is?

The visuals for Electra Heart were partly inspired by internet stars. Who or what has inspired the concept behind Froot?

I’ve been really obsessed with the idea of using shapes and symbols from nature—like certain flowers and trees and fruits—and representing them in almost a “cyber” way. So that translates more to what I’m going to be doing on stage. But in terms of beauty and styling, I’m kind of taking really classic feminine references and interpreting them in a modern way, via different fabrics and colors. At the moment, I’m really loving pantsuits, so I’m looking at a lot of ’70s fashion photography. Essentially, anything that allows you to be feminine but also feel strong.

Do you have specific feminine—or feminist—people you’ve used as those reference points?

Actually, I think the main one is my mum! I found a load of pictures of her from when she was my age in the ’70s, and she just looked incredible! So I’ve kind of copied her hair and parts of her look. It’s very similar to Bianca Jagger’s from that time.

Have you ever had to stand your ground and go to bat against anyone trying to control your image or what you make?

I definitely had feelings of that on Electra Heart, but at the same time, because I was a bit in denial or trying to make it my own thing and grasp back some creativity, I was like, Well, this is my responsibility, and it was my choice to take this route! But if someone keeps persuading or trying to encourage you to do something, I think the only thing you can rely on is your gut feeling or your instinct. If you have to be constantly persuaded, then it probably means that you don’t want to do it. Everyone should rely on their instincts, but it’s so hard sometimes!

It’s hard as well, when you’re around that environment every day, to find the space to check in with yourself and remember what your instincts even are.

Yeah, definitely! Especially when you’re young and surrounded by individuals who’ve been in the business a lot longer and are a lot older than you. You can have a different response to what you’d normally say. It’s the most boring advice ever, but you do just need to trust your gut. ♦