How to Tell Creepy Dudes to Leave You Alone

No one is allowed to make you feel unsafe. 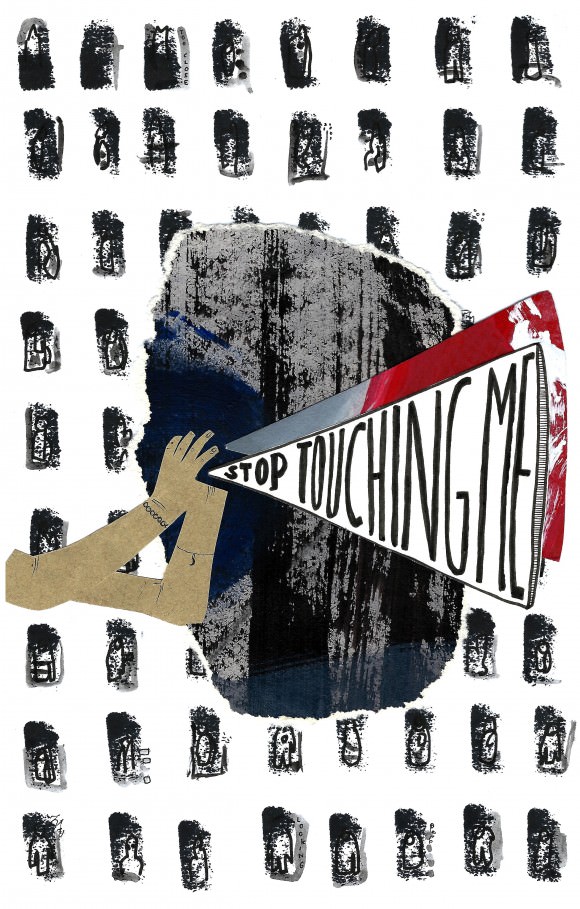 I am an accomplished caller-outer of creepy dudes—the ones who think it’s OK to comment on, or even touch (EW), my body in crowded public places. Forget roller coasters and sky-diving; telling someone who is freaking you out to STOP IT, and loudly, so everyone can hear, is one of the purest adrenaline rushes there is because you’re taking power back from the person scaring you. The first time I called out a creepy dude, I went from fearful, self-blaming, and upset to powerful and confident. I haven’t looked back for even a second.

Three years ago, I was on a crowded train, and as it stopped to let people off, the seat next to me opened up. A man squeezed past all the standing people and dropped into the seat. He sprawled casually, opening his legs wide until they were touching mine. He was wearing jeans. I had on tights and a skirt. I moved my leg and looked out the window. I could feel him looking at me. I glanced over and wished I hadn’t—yup, he was definitely staring. I fumbled for my phone and held it tight in my lap, hunched my head down, and started scrolling through my email.

Fuck. He was talking to me. I gave him a tight smile. “Fine,” I muttered and went back to my phone, clutching it like a life preserver in the middle of an ocean. Maybe he was the chatty type, and he’d leave me alone if I answered his question. Maybe he was one of those people who think strangers should be friendlier with one another. Maybe he’d get off the train soon.

I let a silence pass and then, not looking up from my phone, said, “Yes. Just fine.” I used my curt, mommy-is-very-annoyed-now voice, which was about as confrontational as I used to get with people. He scooted closer. His leg touched mine again. He leaned toward my ear and murmured, “You’re a pretty girl. I like tall girls, I like tall girls with a figure, I bet you like wearing skirts with those long legs.” Ewwwww. He was talking so softly; no one else seemed to notice! Or if they did, they were staying the heck out if it. I didn’t answer and turned my face even more resolutely toward the window. I would ignore this asshole. He poked my shoulder playfully.

“Hey,” he said. I shrunk away from his touch, curling myself as small as I could against the wall of the train. He leaned his body over me. He smelled like old beer. “Hey,” he said. Still talking softly. Right in my ear. “You don’t answer when someone talks to you? Huh? You don’t got any manners?”

Oh my god, this was escalating. I was panicking, quietly, trying to keep it together in front of a large group of strangers on the train. PLEASELETHIMGOAWAY PLEASELETTHISEND. My face was burning red as I tried to ignore him. People always tell you to ignore it when guys do stuff like this, right??? I didn’t answer. Didn’t look at him. He spoke more quietly still. “Hey, I’m talking to you, trying to give you a fucking compliment, you’re a little bitch, you know that? You’re a fucking little bitch, ugly and fat, too, you’re ugly and fat, you know that, don’t you. Bitch.”

He kept going like that—hurling a stream of quiet threats and slurs at me—for almost a full minute, which felt like years. I was blocked into my seat, alone on the train but surrounded by people, trying to ignore that his leg was pressing ever harder into mine. And then he put his hand on my leg. And something inside me snapped. I’d had enough. I stood up suddenly, and in the middle of the crowded train, without stopping to think about it, I bellowed at the literal top of my voice, “YOU ARE BEING CREEPY, STOP TOUCHING ME RIGHT NOW.”

The train went silent. All eyes were on me and the scary guy. My heart was pounding; it was bizarre—instead of being embarrassed to be making a scene, I felt full of power, and suddenly not alone. There were witnesses. This fucking horrible man was touching me against my will in public, and now everybody knew about it. I felt pumped up. I was furious and full of rage. YOU CANNOT TREAT ME LIKE THAT. A big dude started toward the scary guy, going, “Hey man, hey man, don’t be bothering girls like that, c’mon, get away from her.” Scary Guy immediately put his hands up in a “I didn’t do it, it wasn’t me” position and got up to get away from Big Dude lumbering toward him. The train slowed as it approached the next stop. Scary Guy scuttled out of the train without looking back. Shaking, I sat back down. Women all over the train caught my eye and smiled. I felt spectacular.

Dudes who are being creepy in public places are not “just being friendly.” Nor are they even just expressing sexual attraction. They’re trying to assert their own masculinity by acting entitled to your body, and expecting you receive this invasion as a compliment.

They also know how to be creepy without other people noticing, or at least without other people feeling obligated to get involved. It happens all the time. And it’s so, so easy to get away with because they are counting on your social conditioning as a girl, woman, or generally “polite” human to let them get away with being awful. Scary Guy expected that I would be too “nice” to cause a scene.

He picked the wrong person to go too far with. I won’t take this shit anymore—I now make a huge scene the minute someone tries to be creepy with me in a public place. You can, too! Won’t you join me in exposing creeps to the light of day and total public shaming, the actual last thing they want? Won’t you hold my hand as we act out in public, doing the exact opposite of what a creep expects a girl to do when he’s gross to her?

When a stranger is being inappropriate with you in a public setting:

1. Instead of sitting/standing there and trying to ignore it, immediately get up and/or walk away.

2. As you do, LOUDLY and FIRMLY say: “I DON’T KNOW YOU. STOP TALKING TO ME. YOU ARE BEING DISGUSTING AND MAKING ME UNCOMFORTABLE.”

There: People just saw that happen. People are now going to be boring holes into that asshole’s head. He will be, at the very least, embarrassed, and it’s not likely he’s going to try something further with you now. Think of all the witnesses!

A word of caution: This kind of public shaming is for fairly crowded places only. Other people need to be around to witness the creepy dude’s behavior, to apply social pressure to make him feel like a worm, and to help you, if you need it. When you’re alone in, say, in a deserted public park or any other isolated area, GET AWAY FROM HIM as quickly and safely as possible. If he follows you, be as loud as you can—scream, yell NO!—and call 911 once you’ve gotten to a safe place, where you can see he isn’t near.

It might sound scary to publicly call out creeps, but I promise: It gets easier the more you do it. Try practicing out loud and alone somewhere, like your backyard or room, to help you work up the courage to speak up. You could yell, “GET AWAY FROM ME!,” “STOP RUBBING UP AGAINST ME, OH MY GOD EW,” or “YOU DON’T GET TO TOUCH ME, YOU GROSS OLD DUDE.” Get really loud. It will help make your brain and body more comfortable with the act of actually doing it, which you absolutely can because you are POWERFUL.

You get to be loud, my babes. You get to be angry. You get to fight back. You have a right to be in public without being harassed. No one is allowed to make you feel scared and grossed out because they think they can get away with it—tell them. ♦