Things that warm the singer-songwriter’s heart.

DIY Jem and the Holograms Makeup 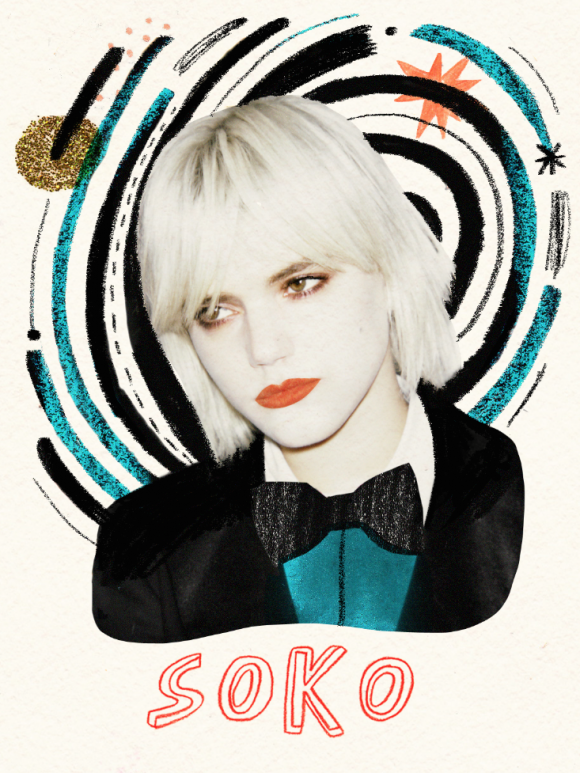 Last month, French singer-songwriter Soko released her latest single, “Who Wears the Pants??” If we had to guess the answer to that question, we’d say—she does! Her music sounds like a reverberating dream, and her lyrics, like these from “Ocean of Tears,” are pure punk: “I can be myself, no reason to lie in an ocean of fears, I’ll enjoy the ride.” Yes! We can’t wait till her new album, My Dreams Dictate My Reality, comes out March 3rd. (Right after, she’s also touring all over the world.)

Soko recently called us to talk about the five things—musical, cinematic, and feline—that have been making her happiest as of late.

1. Cats. I don’t have a cat because I don’t have a home, and I’m always on the go. I’m a cat myself. I love every single cat. They’re soft and independent and also cuddly and beautiful. And I can teach them tricks. I teach tricks to my friends’ cats, like how to stand on my shoulders, or, like, lay on my back. I’ll walk around with them on my shoulders. I just do it over and over and over and over in order for them to get it. I should start giving them treats—maybe that would work better!

2. VHS tapes. VHS makes me so happy. I’ve been directing all my music videos and experimenting with VHS. It straight up looks like ’80s or ’90s junk. Right away, you get the vibe, without having to do any color correction or effects. My new video was shot on VHS, and it’s a guy wearing a bathrobe, smoking a cigar, and reading the newspaper, and he’s taking me over the streets of L.A. on a leash, to the carwash. And then he watches me, really pervy, getting washed up by greasers who are, like, soaping me up and washing me down. We shot it with no authorization. We were worried the cops were gonna come and deport me back to France, but, oh, whatever, it was worth it.

3. The Cure. They’re my favorite band ever. I’ve seen them play, like, three times. I love how emotional Robert Smith is. I love everything about them, mostly the first record, Three Imaginary Boys, which was a lot more punk than the music they made later. It’s my favorite work of art. I have not met Robert Smith, but the guy who produced my record, Ross Robinson, produced one of the Cure’s records. I wanted my record to have that vibe—a lot of chords on the bass, and reverb and chords on baritone guitar.

4. Baritone guitar. It’s the kind of guitar Robert Smith was using in the late ’70s and early ’80s. It’s basically a whole octave lower than a normal guitar, so it’s between a bass and a guitar. It makes my favorite sound—playing with it, and putting it through reverb and delay. To make this record, I really insisted on trying to find one, and I wrote every single song that’s on the record on that guitar. It’s been so inspiring. I don’t own one because they’re so old and cost, like, thousands of dollars, so I think I’ll have to work a lot and make a lot of money until I can buy one.

5. Movie nights. It’s the one thing I like to do best: cook food and have movie nights with friends, under lots of blankets, to watch stupid romantic comedies. I love The Notebook—it’s not really a comedy, though. ♦