I was joining the ranks of fearless women before me, and lip gloss was my way in. 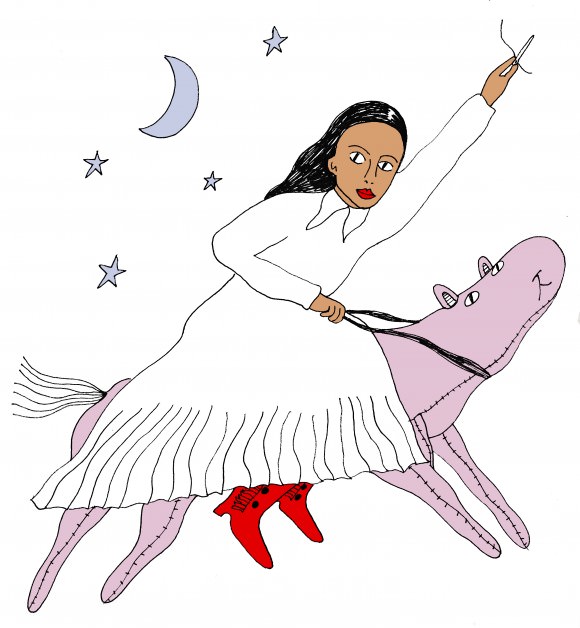 I am the youngest of three siblings. Growing up, I watched as my older sisters reached “girly” adolescent milestones like buying their first lip glosses, hoping for glimpses of my own future—even if what I saw in that crystal ball/compact mirror felt unattainable. In the spring of 2002, I was a 10-year-old girl who had been assigned male at birth. I ached with jealousy as one of my sisters slipped into a royal blue prom dress accessorized with butterfly clips and glitter eye shadow. The sight was dreamlike: It all felt unattainable, even though I wanted it so badly. I dreamt of my own prom; I imagined myself wearing the same shades of red that graced my mother’s lips. My girlhood was the first thing I knew to be true—although it would be years until my family saw that for themselves.

My life in Tennessee was an exercise in doing the opposite of what I had been taught. Instead of football with the boys, I was fighting with my friends over Beyoncé’s spot when we pretended to be Destiny’s Child. In this world of make-believe, I could embody the strength of songs like “Bootylicious” and “Independent Women.” I wanted to feel that way all the time. My transness had no evidentiary support and my body was not an ally, but my girlhood was my foundation—the only thing I was sure of. I maintained my survival through these rare moments of bliss. You could often find me wearing my mother’s red lipstick while everyone was asleep, taking my dream into my own hands. Seeing my mouth painted the same shade as my mother’s connected me to all the women in my family before me. It allowed me to envision myself joining their ranks. The shyness I felt during daylight hours eluded me when I wore makeup, so I made a nightly habit of it. Resorting to my collection of forgotten cosmetics and perfume samples in secret, I became the courageous telenovela starlets that I watched on TV with my family.

I grew older, and with age came the internet. At 12, I was desperate to locate a virtual home for my feelings. I found it on MySpace, where I discovered girls my age who were also trying to navigate the world. These girls were resilient; burning with desire to be seen. Even though they were pixels on a screen, they had a commitment to living authentically as themselves that I had never encountered in Tennessee.

We helped one another recognize the power of language and beauty, learning the words “gender fluidity” and “transgender,” and Google Image–searching eras in fashion. We cut our hair. Bleached it. Cut it again, and bleached it again, making the world see the space we occupied. We shared photos of one another’s fashion evolution, and recognized the beauty we all possessed. During the day, hearing words like “abomination” in our communities, where our choices were criticized very vocally, became easier because we could unpack these words online while our families slept. We were, essentially, recreating our lives. For the first time, I found a world I could see myself in.

Androgyny was my gateway into aligning my spirit with my presentation. I eased my way into it by wearing jeans that were just a little too tight; my hair always just a little too long. I was testing the waters of what it was going to be like to make gender non-conforming fashion choices in my community. They weren’t exactly friendly: I went from seeing the adults I knew as voices of reason, to being constant threats on identity because of the way they spoke to and policed me. When my peers refused to offer me their friendship, it told me that I was successfully challenging the rigid binary of gender in our school. I found shelter in stores like Hot Topic, where people of all genders were allowed a bit of black eye liner and glitter.

I had stepped away from the ideas of traditional maleness that had been placed onto my body, but I still hadn’t fully revealed myself as a girl. In the eighth grade, my math teacher gave me some advice that I’ve never forgotten: “The decisions you make now will affect the life you’ll have tomorrow.” Though she was trying to encourage me to do my math homework, I found her words were more applicable to my decisions about my personal style. I came to the decision that I couldn’t experience high school feeling falsified by other’s expectations. I knew that they should see me as I had always seen myself.

I had to make a careful entry into womanhood, as my mother’s suspicion was rising. She was still under the impression that she had a son when I started sending her hidden signals to the contrary at 13. When I wore clear nail polish at dinner, she was catching sight of her youngest daughter. I came along that year when my mom ushered my 16-year-old sister into young womanhood by presenting her with a blue sapphire necklace before a trip to the Clinique counter, where they chose neutral shades of beige to start her makeup collection. A swipe of shimmery lipstick seemed to provoke awe in my mother: Her daughter was becoming a young woman. I’d always envisioned my induction into femininity in a similar way, and at that moment, I knew I had to be my own maternal figure and give it to myself, just as I had my mother’s lipstick.

I may have had my own permission to exist in the world, but funding my decision to be seen as myself proved to be a challenge! Instead of eating school lunch with my weekly allowance of $10, I stowed it away. At school, I distracted myself from my hunger pangs by clipping images from Teen Vogue, surrounding myself with vibrant expressions of femininity. I was curating a new image for myself, nourishing myself with hope. On the front of my binder was a smiling Gemma Ward, wearing Marc Jacobs and riding her bicycle in the Australian sun. Being visible in sunshine was something I felt was reserved for everyone else, but I knew my own time in the light was near: Five weeks without lunch meant $50 and a visit to the MAC counter.

For as long as I could remember, a visit to the mall meant a glimpse of MAC’s anarchistic glamour, which I badly wanted for myself. The artists were their own canvases, with a range of hair colors as extensive as that of their products. They were making their own standards of beauty—and helping me create mine. Their loud music blared, and the vibrations that had always reached out to me as I passed by with my family created a riotous atmosphere. I was guided by one of the makeup artists who had dyed her hair purple, painted her lips with a shade of periwinkle, and decorated her face with a nose ring. She introduced me to a world of colors and textures and taught me how to apply lipstick. When this woman brushed the color onto my lips, she conducted the initiation rites I had longed for. I was joining the ranks of fearless women before me, and Pink Lemonade lip gloss was my way in.

I purchased my armor—mascara, pink blush, and blue eye liner—and got ready to face the world. It was summer break by that point, and I spent it perfecting smoky eye looks and putting on excesses of blush. As the nights became cooler, I knew that my unveiling was close. Sleep eluded me the night before the first day of school. I felt as though my entire life had been dress rehearsal, and my big performance was quickly approaching. When the alarm sounded, I braced myself for the day ahead. I crawled out of bed and went over the details I had spent all summer mastering. My mirror was positioned in front of me, along with my reflection, I reminisced about all the times I had imagined this moment as I slowly moved my trembling fingers over my shrine of cosmetics. Next, I had to create an atmosphere, so I pressed play on a YouTube video of Joan Jett’s “Bad Reputation.” I swirled the bristles of my blush brush, took a deep breath, and began.

With an unsteady hand, I covered my eyelid in black with a kohl pencil. My fingers created a haze of smoke of smoke on my lids that called upon the powers of women like Debbie Harry and Courtney Love. I teased my hair, giving myself an additional two inches of confidence. I took the red lipstick out of my mother’s purse and colored outside of my natural lip line. Red incites revolution, and today I was Joan of Arc. I summoned the strength of every trans woman that came before me. I adjusted my posture.

The five-inch black heels I ordered online made me feel like every Naomi Campbell video I had watched on YouTube. Armed with enough perfume to cover a mile radius, I crawled out of my window and rushed myself to the bus stop. At school, I felt as though I was watching the day from a bird’s-eye view, and my body was on autopilot. Hallways parted like the Red Sea, and teachers joined in as fellow students yelled slurs. Girls who did not understand our similarities, despite our different experiences, kicked me out of the girl’s bathroom. The looks of disgust on the faces surrounding me could be felt even when they turned away.

Being shoved into lockers ruined my perfectly teased hairstyle, but the transcendent ritual of creating it couldn’t be taken from me. The flashes of glitter on my nails and smell of my perfume were reminders to myself that I was honoring the dreams I had had from the earliest moments of my childhood. That vindication made it possible to let the insults roll off my shoulders. And? I had anticipated my peers’ harsh reaction, but I didn’t expect the chain of events that followed. In the weeks after my debut, the dust began to settle, and some of my peers began to rise up. Students of different sexualities and genders came out of hiding. There was an energy shift in our school, and the kids who lived in fear stood by me. They told me my act of defiance was their beacon of hope, just as the Teen Vogue clippings had been mine. These people became my friends, and together, we formed a resistance against our environment, just as my online community had cheered me on in the past. We offered each other protection, and the strength in our numbers could be felt in the entire school. We loved each other publicly, and our friendships continued to flourish long after high school, as did our hard-won lives and identities. My blush had started a revolution. ♦

Devan Diaz is a 22-year-old native of Tennessee searching for nuance in New York City, armed with a notebook and black winged liner. She’s on Instagram and Tumblr.