Why do people expect me to dress the same way every day, without fail? 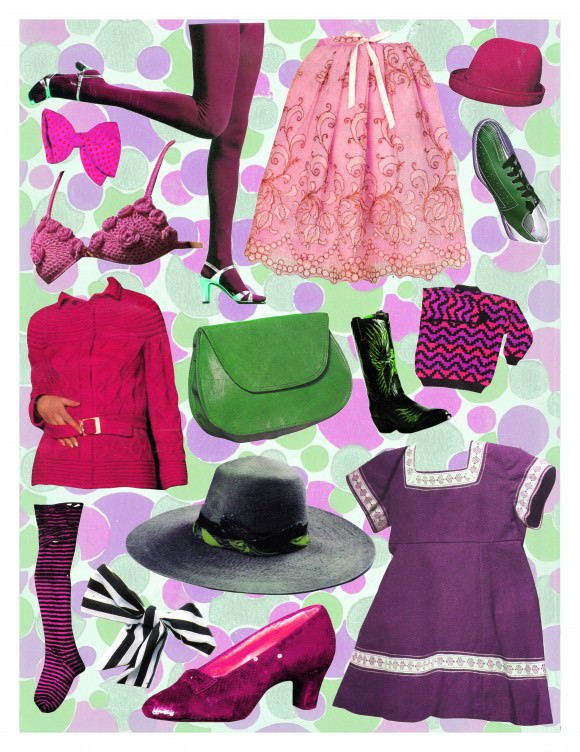 Not long ago, a teacher asked to see my outfit—a plaid skirt and fitted sweater—as I was walking past him in the hall. When I turned around, he grimaced and said disdainfully, “It’s OK, but you could do better.” This was gross on several levels (Why was he paying such close attention? Why did he care so much?), but it also set off my biggest pet peeve: people calling me out on what I wear, or passive-aggressively remarking on my clothes because of weird presumptions they have about how I should look.

In ninth grade, I discovered that there was more to clothes than looking “nice” or “cool”—they could also help me explore identities that went beyond the ones I’d been born with. I could be more than “Lucy, teen girl;” I could be glamorous, alien, mystical, alluring, or terrifying, depending on my mood. I chose to dress differently than the demure, traditionally feminine, and invariant uniform of leggings and Uggs I wore in middle school, and more fantastically than the people I knew at school or in my town ever did. I gave myself permission to overdress for daily life, wearing gaudy ball gowns whenever and wherever I wanted. I ignored rules about how tall girls shouldn’t wear heels, and added inches to my five-foot-nine frame with huge platform boots that propelled me to new heights. Finally, I was presenting myself in a way that was truer to who I was—that was as outrageous and artful as I’d always wanted to look and feel but never had the courage to try. It was powerful! I was so free…well, at least for the first few weeks.

I noticed that, once they stopped making comments like “Did you skin a Muppet for that fur coat?” and “You look…interesting [side-eye],” people expected me to dress elaborately and uniquely every day, without fail. Friends would ask me what was up if something I wore wasn’t super bright or flamboyant, and teachers expressed disappointment if I wasn’t always dressed to the nines (See: “It’s OK, but you could do better”). It was as though, to them, if I wasn’t trying hard to look interesting (i.e., different from the norm) every second of every day, I was somehow losing sight of who I was—or at at least who they thought I was. But as a human, I sometimes oversleep and throw on jeans or sweatpants! There are days when I don’t feel like being “interesting” or “weird,” and occasionally I do want to—gasp!—look conventionally pretty.

When I wore “trendy” clothes, it was because I didn’t want to be made fun of for being weird or different, but I also felt constricted by other people’s expectations. Freeing myself from that burden was the reason I started dressing “differently” in the first place, but there I was again, being expected to squeeze myself into a box. It’s like no matter how you talk, act, dress, or otherwise present yourself, people who think they know who you are—friends, mentors, classmates, siblings, parents—want you to avoid switching things up. Once you’ve chosen your path, whether you travel it in platforms or Australian fur-lined suede boots or whatever, you’re supposed to stick to it.

The expectation that I, or anyone else, should behave or dress with consistency isn’t necessarily evil. It’s a part of human nature: We want the world to be well-ordered and to make sense. When a routine gets flipped on its head, we feel confused, and even afraid. Have you ever wondered why the characters on the cartoon Arthur wear the same outfits in every episode? (I did as a kid, yelling, “Don’t they sweat on their clothes? Does everybody have 50 of the same sweater?!” at the TV screen…) It’s because if they changed things around, we’d get the characters confused, and the show wouldn’t make sense anymore. It’s such a basic, primitive concept, and a part of everyone. But as people with empathy, we need to take a more thoughtful look at who is around us: They aren’t mannequins, or cartoon aardvarks. They’re multifaceted humans—so let them live! We can’t demand that everyone cater to the ideal of what we want, or even subconsciously assume, to see. People who force others to conform to their vision a lot of times wind up pretty lonely (think about Regina George).

Inevitably—because everyone has permission to do so, for whatever reason—you will change, and in ways that mean you no longer fit into the box that was assigned to you. I’ve found that laughing off other people’s comments about my clothes and selfhood is powerful way to deal, because it’s a way to shut them down without trying to hurt them back. It also helps to have a playlist of empowerment jams at the ready (I suggest a combo of M.I.A., Charli XCX, and the Strokes), so you can put in your headphones whenever you feel threatened. Constantly remind yourself of your idols, and where they would be if they simply gave in and let people control them. (This has worked for Tavi, too.) Also, even though it’s terrifying, you can tell someone when and why they are hurting you, and ask them to stop. Letting them know will hopefully make them reassess what they’re saying and doing to another person.

I wish that a forcefield or magic wand or **sheer self-esteem** could block this kind of criticism! As much as I wish it weren’t true, it’s incredibly hard to not let other people’s opinions affect you. But when you buy into the idea that other people are the best determinants of how you should dress, or even be, you can get carried so far away from yourself that you’re prioritizing other people’s happiness without also paying attention to your own. It’s corny to say so, but the only person whose opinion really matters to you, your whole life, is yours. When you wear something you like—whether it’s jeans and a T-shirt or 1980s sequin jackets and fishnet tights—remind yourself why you put those clothes on. If it’s because you feel good in them, and they’re true to however you want to be in the world, then it’s OK. You actually couldn’t do better. ♦