Why Can’t I Be You: Charlene Carruthers

“There’s no perfect way to be an organizer.” 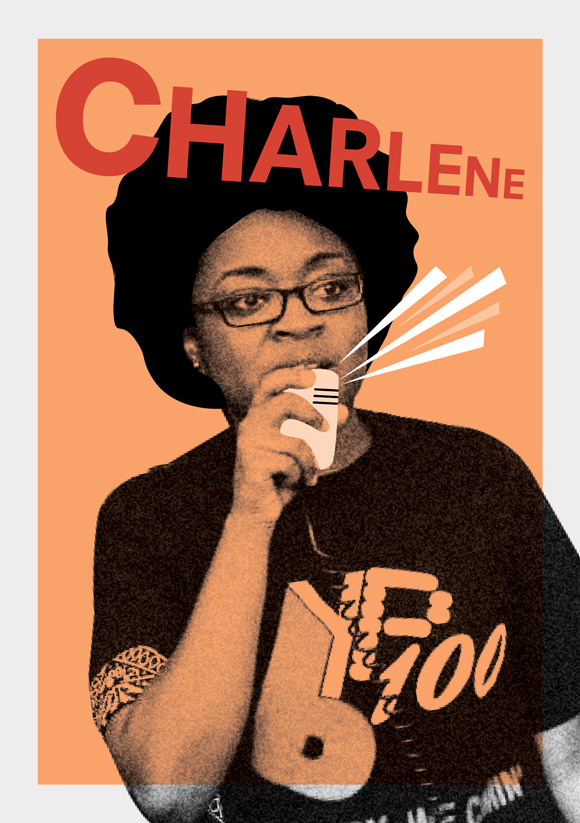 Charlene Carruthers gets stuff done. The 29-year-old is the National Director of Black Youth Project 100 (BYP 100), where she and her team of young advocates work to build a world where all black people have economic, social, political, and educational freedom. She embodies the message I saw emblazoned on one of her BYP 100 shirts last year: “Unapologetically Black.” She leads with intention and vision, and suffers no fools—and these are only a few of the reasons I believe she is unstoppable.

I met Charlene when we worked together at Women’s Media Center to make women and girls more visible and powerful in the media. Every day, I was impressed by her strategic mind, resilience, and keen understanding of power. Over the last three years, I’ve witnessed her take leadership in grassroots and digital strategy campaigns for ColorofChange.org and National People’s Action, in addition to her work training the next generation of social justice organizers for NAACP, MoveOn.org, New Organizing Institute, and the Center for Progressive Leadership.

I talked to her recently about finding your role as an activist, self-care, and why there’s no “perfect” way to fight for social justice.

JAMIA: How did you come into your role as National Director of Black Youth Project 100? It’s a big job.

CHARLENE CARRUTHERS: It’s a really big job. I recently became National Director. I was first approached about becoming BYP 100’s National Coordinator, and I said I didn’t want it. At the time, I was Director of Online Engagement at National People’s Action. I was invited to join the planning committee for BYP 100’s first convening in July 2013, when we were solidifying the organization. That’s what I thought I was going there to do—help facilitate that weekend’s events.

It was the weekend George Zimmerman was found not guilty in the killing of Trayvon Martin, and that evening I facilitated a conversation about what we were going to do next—how we could insert our message, as a collective, into the national discourse about the criminalization of young black people, which we wanted to expand beyond young black men and young black boys. We were looking at a combination of policy, direct action, and educational work. I tried a couple of times to concede the facilitator’s role to somebody else, and it didn’t happen. I guess whatever I was doing was working for folks.

When BYP 100 got funding for a full-time organizer, I had a real moment with myself to think about what I wanted to do as an organizer, and what I’m passionate about. The biggest question was, “What is my stake in this movement?” Seeing that I could be a part of something much bigger than me, and something that would hopefully survive even after I wasn’t in this particular position—I realized I could help build an institution, and not just an organization. I’m committed to playing a role in developing young, black people into the leaders and organizers that they want to be. I’m also committed to making sure the discourse around the value of black life, the discourse around black liberation, is truly inclusive of all black people. For at least the last six years, I’d been talking about wanting to build an organization that’s really centering young black people—all kinds of young black folks—for the sake of our liberation. It took other agitators saying to me, “Charlene, this is what you said you want to do. Now you have the opportunity, go and do it.”

What is the most important thing you have learned about yourself since you’ve been involved with BYP 100?

Gosh! I learned that I came into this role with not as much confidence about my abilities to do this work. I had some basic confidence to create something new, but I’ve learned that I have much better instincts than I thought I did, and it took six to eight months to realize that. I was constantly questioning myself.

I didn’t know that the best part of my job would be developing other young leaders—seriously being a part of that process and helping bring confidence out in people in real ways. I didn’t know that I could do that with my people consistently, which is not a reflection of what I’ve learned in training—it’s a reflection of my own growth and development as an organizer and a leader. It’s a lifelong journey. I will age out of this organization, and rightfully so, and I’m OK with that.

There’s so much going on in the #blacklivesmatters movement. It seems like every day something new is popping off. How do you prioritize how to focus your energy?

First of all, I’m an organizer for an entire organization. We make decisions about the work we do and our broad agenda collectively, and our people have a lot of experience. Being created out of a moment that had international and national implications allowed us to be very clear about the task before us: We’re fighting for freedom and justice for all black people. Sometimes we veer off track just a little bit, but our mission is very clear. We want economic justice. We want political justice and political power. We want educational justice for all of our people. It can’t all happen overnight, so we have to be strategic in the way we go about things.

When we collaborated at Women’s Media Center, you worked on a campaign about representation in the media. How does media participation and engagement impact your current work?

As a black queer woman, media representation absolutely impacts my work. We live in a climate where media is comfortable with going to the same sources over and over again—specifically cisgendered men. Fortunately, more and more of those sources are now also black queer women, such as Ashley Yates, but they have had to fight for that—and they shouldn’t have had to. There are a lot of rockstars, but each person has had to fight for visibility. Even though we know that the movement that we’re building is far more representative, and more reflective rather, of the people who are doing the work, at the same time, the media is behind. We need to see a broader representation of black folks, black women, and black queer folks in the media. We have to see more diverse perspectives, because that is who we are as a people. It’s not about diversity just for diversity’s sake. To be truly reflective of our community, we need to be truly reflective of many kinds of voices.

I know that movement building and non-profit work can be intense, and often thankless. How do you practice self-care while you’re busy with organizing campaigns across the country?

I’ve found that I can’t do it alone. It’s been helpful to have other people in my life who check in on me, and who ask if I’ve been eating well, sleeping, and taking days off. I have a meditation practice that is, at best, a practice I don’t keep up with as well as I should; however; it’s important. Cooking and writing have become important parts of self-care for me. I also completed a program for black organizers called Black Organizing for Leadership and Dignity, and I came out of that program better equipped to understand myself, not just as a person, but as a black person who has experienced personal traumas—that I’m a part of a trajectory, or a continuum, of people who have experienced a lot of trauma.

Selma just came out, and we recently celebrated Dr. Martin Luther King, Jr.’s birthday. He had a vision and a dream that was really important to us getting where we are now. What is your dream for the future?

I have a lot of dreams. I hope to become a scholar who makes serious contributions to Black Studies—specifically about the relationship between black women and the state, and how the state treats citizens who access certain public benefits, like food stamps and subsidized housing, and how that’s connected to social movements. I also have a dream that [BYP 100] is building an organization that will always exist, and not simply to fight things, but to also create things. Once we end criminalization of young black people, what are we doing to protect that? What are we doing to create new opportunities for our people? What are we doing to cultivate the land, and healthy economies in our communities? My other dream is to see the dismantling of the prison state. For there to be no jails, and no prisons, period. And for us to take a serious look at what we see as violence, how we deal with violence, and how we create safer and healthier communities where people can actually live and thrive.

What steps did you take to get your first job as an organizer?

I gathered the nerve to have conversations with people who had been organizing for decades, and I set up a series of one-on-ones with other organizers. I talked to people to figure out who I wanted to get my organizing experience with, and who could connect me with other people—old-school organizers who had been doing it for decades. I was introduced to the community organizer Arnold Graf, who was doing power-building in various communities across the country, and he was so helpful. I also talked with Bertha Lewis, the founder of the Black Institute.

What’s one of the mistakes you learned from as a young organizer?

It may sound simple, but the value of listening before acting. I was definitely was real quick to turn up in a meeting, or get really upset and not hear people out. Just being patient, and taking a moment to listen before reacting has been one of the things that I’ve had to learn to do.

How can young people who are interested in social justice movements and organizing get involved in causes they care about?

The most important thing young people can do is educate themselves, and seek out resources and organizations that share their values. Listen, read, watch YouTube videos, engage in conversations with people, read social media, and join an actual organization. It’s important for young people to be involved in organizations where they can add value, both at the local and national levels. We all have a stake in changing the world. You don’t only have to go to protests—you can write letters to your legislators. You can write. You can speak up in class. I think it’s important for everyone to be involved in whatever way they can be involved. There’s a role for everyone—there’s no perfect way to be an organizer. Not everybody has to do it in the exact same way. ♦