Why Can't I Be You: Charlene Carruthers 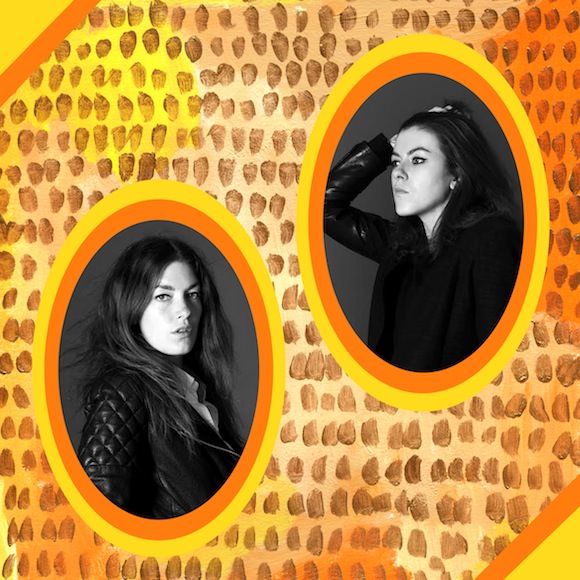 Collage by Minna, using a photo by Joseph Piper.

Colette and Hannah Thurlow cut their teeth as teen punks in Bristol, England, where they played together at rowdy house shows under the name the Vulgarians. Since then, the London-based sisters have taken 2:54 as their new band name, simmered down the angst factor, and joined bands like Warpaint and the xx on tour.

Their sound has changed and evolved, but their punk roots run deep. In an interview with the Guardian, Hannah Thurlow said that the name 2:54 came from the moment in the Melvins’ song, “A History of Bad Men,” when the bassline becomes “doomy and dreamy.” The same words could be used to describe the overall vibe of 2:54’s latest album, The Other I.

I talked to Colette Thurlow on the phone this week about life on tour, sibling telepathy, songwriting as a form of prayer, and the significance their exclusive cover of Paramore’s 2013 single “Now,” which we are pleased to present to you as this month’s theme song:

SUZY X.: How did you and your sister Hannah start playing music together?

COLETTE THURLOW: We started in our teens. Our parents weren’t musicians, but they were big music fans. They’d listen to Gram Parsons, the Pogues, some soul, and Motown. Hannah taught herself guitar around the time she was 14. She’d play guitar in our bedroom, and I’d sing along. We just had fun with it. Then in our later teens we started a punk band.

Why did you decide to start a punk band?

We both wanted to play really fast guitar. That was my main aspiration. We found a great punk drummer, and did a handful of shows in London. That was our first tentative step: Playing live and getting to know what that whole experience is about. Punk really ignited that first love for being in a band.

Which artists inspired your music back then?

We were really into At the Drive-In. We also loved the Distillers, especially [lead singer and guitarist] Brody Dalle. She was inspiring: It was the first time we’d seen such a powerful frontwoman playing guitar really fast. We went to see the Distillers every time they came to Bristol.

What prompted your change in musical direction?

I read that the title of your latest album The Other I, is inspired by the poet Percy Bysshe Shelley, who described his friend Elizabeth Hitchener as the “sister of my soul, my second self.” You’ve said that this line expressed something about your relationship with your sister: “We know intrinsically what the other thinks and feels, music is just another language we use to communicate.” How do you and Hannah write songs together?

For this record, we just sat in a room together. Not exactly a jam session, because that sounds a bit hippie-ish, but we were working out ideas together. Hannah would go off and write a guitar line, and I’d go off and write a melody, then we’d come back to this room and put it all together, organically.

It’s very lucky that you didn’t have to hunt down your musical soulmate—she was born into your family!

Yeah! We’re actually quite different—I live in South London, Hannah lives in North London—but we do have this intuitive bond. We never ever discuss it, we just know when it’s right. I can just give her a look, and she knows. We can have a whole conversation with just one look.

Your album grapples with claiming your individual identity while also being part of a shared, communal identity. In your song “Blindfold,” there’s a line that stands out: “Whether I believe in me alone.” What were you feeling as you were writing this track?

“Blindfold,” and a lot of songs on the record, pose questions that make up the beating heart of the record. It touches on the anxiety of reconciling creativity with everyday business. Or, of trying to be a band in the modern day. Being in a band is a belief system, like a shared faith. You have to believe in it to make it work. The record explores the idea of committing to the band.

Never stop! That’s the fundamental point. It can be turbulent trying to navigate the music world when you’re in a band and you just want to make music and play songs, like everybody does. But there’s a system that you have to operate in, especially with the internet. The advice I would give a new band is to rehearse and play as much as you can. Believe in it and put everything into it. But you can’t control everything. All you can control is how good you are as a band, and how open you are to connecting with each other. No matter what happens, keep writing. Keep going. Don’t stop.

It sounds a lot like driving! Have you ever reached a moment when you had to pull the brakes on your music? Or, stop and reevaluate the direction of the band? How do you move forward after that?

When we finished touring our first record in 2012, we’d been away from home for about a year. We came back and had to make a new record. Writing became a cathartic way to process everything from the past year. That was the first time we’d experienced the intensity of playing live music non-stop on tour. It was the stuff me and my sister dreamed of, in our bedrooms as kids—riding in the back of a van through America. We needed a moment to take it all in, and to write it all out.

A year is a really long time to be traveling. Did you find it easy to write on the road?

I find it’s great to run through ideas during sound check! You figure out that it’s the only time you’re gonna get to do that. Hannah and I might try to write in a hotel room, but it really comes out onstage.

Sometimes, I come across a song that magically feels like it’s just for me. I’m always shocked that a stranger is singing the right thing at the right time, and that we’re sharing this three-minute, telepathic connection. Which songs make you lose yourself, and feel like the musician really gets what it is you’re feeling or experiencing, so much so that you almost become them?

The first time I heard “Horses” by Patti Smith felt completely transportive and transformative: I burst into tears. It’s like, you’ve been struck by something in a profound way, at just the right time, like lightning. It was the poetry, the punk of it. That album showed me the incredible potential and power of music.

It’s uncanny how music can be something universally shared with everyone, but it’s simultaneously a personal telephone line into somebody else’s heart.

It takes you outside of yourself and that loneliness. Music is all about a shared human experience, it is its own language.

Why did you choose to cover “Now,” for this month’s theme, “Dedication”?

Paramore’s song just sums up dedication for us. It’s about hope and determination. It’s about believing in something and fighting for it, and being in a band is a belief system in itself. It’s an empowering song. Hayley Williams is such a superb singer. We saw Paramore last year at Reading Festival. Their set was was disrupted by some technical problems, but Hayley Williams was just so pro, she held it down so well. They got some acoustic guitars out and the party started all over again.

There’s this really powerful line in “Now:” “If there is a future, we want it now.” What kind of future do you have in mind, for yourself or for music in general? What makes you excited about the future?

I don’t think too much about the future. I think about the present: I’m all about the now. I feel like living in the present tense is important for sanity in this day and age. As for music—who knows? Hannah and I will always be making songs. That’s gonna happen for the rest of our lives. Regardless of anyone listening, we’ll always be playing together. That’s the future I see. ♦