How to talk about, instead of over, causes you care about. 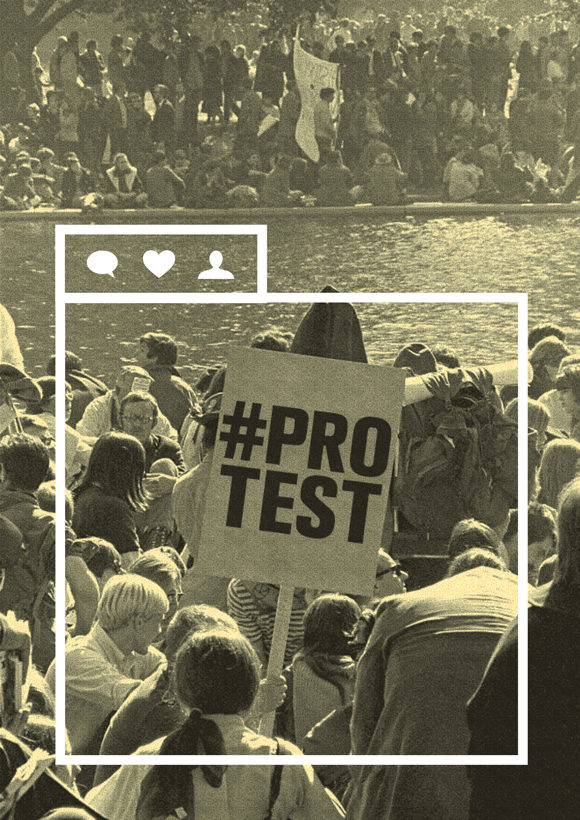 My dad has always told me that I’m quite stubborn when I’m passionate about something. I rarely let people help me; I always thought I could do everything alone and had too much pride to accept volunteers who wanted to help. “Let people in, Malaya. Don’t be afraid to accept help,” he’d say. And he was right. It echoes in my mind from time to time when I feel like it’s happening. I think my main fear was being used or pitied by people offering help. The same thing, writ large, is true of how I felt about social justice: It only recently dawned on me that dismantling racist structures isn’t a job solely for people of color. Fighting oppression can’t be done alone, and, though it was hard to accept at first, I should understand that willing allies can be helpful. (If they go about it respectfully, that is—they can also be…not the greatest, even when their intentions are good.)

The killing of Michael Brown woke me up. By this, I don’t mean that his death woke me up to the unlawful killings of black people committed by the police, as I’m reminded of that all too frequently. Instead, it showed me how divided communities of people—socially, politically, and culturally—become when the awkward topic of race comes to play. Look, I’m not someone who’d pressure anyone unaware of human rights laws to speak on a murder. At all. But it still hurt when I saw some of my favorite people on Twitter stay neutral as Ferguson fell apart. Or, worse, I saw my favorite people supporting police brutality. (Thank god for the unfollow button!)

I’ve overheard my white friends using the current tension to talk about how, “We live in a worldwide police state that’ll eventually kill us all,” and rolled my eyes to oblivion. Although I’d like to give them the benefit of the doubt because they buy me cool birthday presents every year, I’m pretty sure they’re aware of the fact that them being killed by a police officer is uh…unlikely. I remember feeling quite angry that they’d completely ignored the specific demographic who suffer the most from racial profiling and police brutality and erased historic evidence so it could apply to them. “Who does that?” I thought. I was pretty disappointed in them for that. And when you do have friends who are complicit in the act of erasure, tell them. Make them aware of what exactly it is they’re doing and how it affects particular communities so they don’t do it again. What they could have said was “We live in a worldwide police state that is killing black people. How do we change this? We should all be fighting this!” and we’d have been able to have a concise discussion on the measures we could take to make change.

Passion and dedication are the key components to staying on track and making a difference towards equality, but equally crucial are mutual respect and intersectionality. Everyone should be working together to grant change and liberation. This reminds me of the phrase, “We the people.” For those of you who are British, like me, or otherwise unfamiliar with this, I’m here to help: “We the people” are the first three words in the opening phrase of the preamble to the United States Constitution. It’s been widely adopted in popular culture throughout the past 40 or so years, and implies that the human race is all ONE BIG HAPPY FAMILY. But this line of thinking, while nice in theory (and also kind of true), can also be misused by allies who lump themselves in with marginalized, victimized, or oppressed groups of which they aren’t a part. Sure, white allies were rightfully angry at society, how the government works, and whatever else after Michael Brown’s death. But were they…marginalized in the same way as black people? Victimized? Oppressed? I think not.

A month ago, I was at a rally for Michael Brown. Some guys stormed the stage after a speech by the mother of Mark Duggan, a British man murdered by police in London, to discuss the turmoil in Palestine. They tried to emphasize how similar the injustices faced by black and Palestinian people are. Which, of course, is true on some levels: The oppression of the Palestinian people and the black community do share similarities! I don’t deny that in the slightest—all oppressed people share the similar experience of being disenfranchised or otherwise unfairly policed. But to attend a rally where the main slogan is, “BLACK lives matter!” and make it about another group is dismissive. Not only is it dismissive—it’s basic erasure. It implies that the issue in question isn’t as important as the one it’s being interrupted with. Racist police brutality is a painful part of history for people of color, and specifically black people, and this guy was distracting from that in a totally inappropriate way.

It’s not that solidarity itself hurts or is offensive in any way, but to take away from the sole point of the discussion and reduce a people’s struggle to relate to yours purely to get your point across isn’t OK. Rearranging or speaking over history to fit your agenda and make it “relatable” is straight-up disrespectful: I wouldn’t attend a Holocaust memorial and get on a podium to talk about slavery, you know? The last thing that those mourning a tragedy want to hear is someone else derailing the discussion to make the conversation about their own struggle. There is a time and a place for pointing out these similarities, and, that day, it certainly wasn’t at an event held specifically in memory of a young black man shot by police.

This happens online, too, of course. Like many other humans, I use social media almost every day, and what I see there causes me to question if it sometimes hinders social movements. Now, it’d be a little absurd to suggest that Twitter, Tumblr, and Facebook haven’t been instrumental in spreading information on urgent social issues and injustices (see: #BringBackOurGirls, #Ferguson, #YaMeCanse, etc.). But it’s naïve to think the internet is a cyber utopia that’ll dismantle institutional racism and all means of oppression. It takes a hell of a lot more than that (unfortunately—I wish liberation for people of color was a retweet away). Some people on social media use racial tension to enhance their “personal brand,” and it worries me. It almost seems as if some popular white online personalities are competing in a game of, “How liberal are you?” by retweeting as many hashtags as they can in a small window of time so they can go back to tweeting about how cute their boyfriends are. It’s hard not to question the motivations of famous people with large platforms decide that tweeting a hashtag is their activism done for the year (although it’s also important to keep in mind that it’s impossible to tell someone’s level of involvement with a cause offline just because they’re not posting pictures of themselves at protests like, “I CARE VERY MUCH, LOOK AT ME CARING!!!! I AM A GOOD PERSON”).