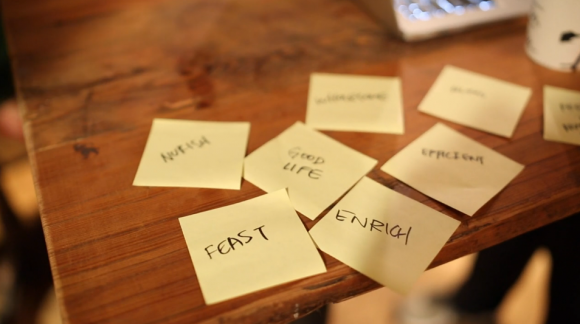 Brainstormin’ at Coding for Women’s Health.

A few months ago, I stepped into a strange and wonderful parallel universe in which young women dominate computer programming. It was Codeathon: Coding for Women’s Health, a weekend-long computer coding event at Ace Hotel in New York City, cofounded by the Clinton Foundation and Ace Hotel. More than 70 percent of the participants of the Codeathon were women, a satisfying inverse of the status quo of the computer world, where women only comprise around 26 percent of the workforce (in the United States, at least) and face a challenging gender gap. (Google, for example, has an overwhelmingly male staff.)

At the typical codeathon, coders come together to create software projects, usually for an intense weekend of computing, collaborating, and competition. These events often go late into the night, like a caffeine-and-synergy-fueled slumber party of computer geniuses. At Coding for Women’s Health, the goal was twofold: to encourage young women’s presence in computing; and to create app prototypes around women’s health and nutrition. Participants divided into teams in the dreamily lit basement of Ace Hotel and worked through the weekend designing, coding, and testing their apps. The issues they tackled are tough and complex: food deserts, food gentrification, the challenges of single motherhood, and families’ lack of access to education and nutrition.

Coding is important to me because it gives me freedom and independence. People should be empowered by their computers and devices, but without knowledge of how they work, we end up being slaves to them. It’s a very clear case of KNOWLEDGE = POWER. If you know how to code, you can create your own web spaces rather than use commercial ones that spy on your online activity and advertise to you and control how you share content. You can also make things that improve the lives of your fellow humans, which is what Coding for Women’s Health was all about! I spent a couple days hanging out with some of the teams to see their designs in action:

SPOILER SPOILER the winning team was Black Unicorn, with their brilliant app Feasted! Feasted works to improve nutrition for families in need by assembling healthy meals, based on their preferences, while pulling in information and resources from government nutrition programs and food donation centers. The app aims to provide the basics for a nutritious meal so that busy families can enjoy cooking and eating together. It’s slick and simple, and you can try the demo here.

So does all this coding business look awesome to you? Of course it does, you gorgeous, socially responsible brainiacs! Here’s how YOU can get involved in the world of coding:

Coding is powerful! Get your brains in on this, Rookies! ♦