Plus, dogs riding buses ALONE, social experiments on dudes, and so much great music news.

Sunday Comic: Into It 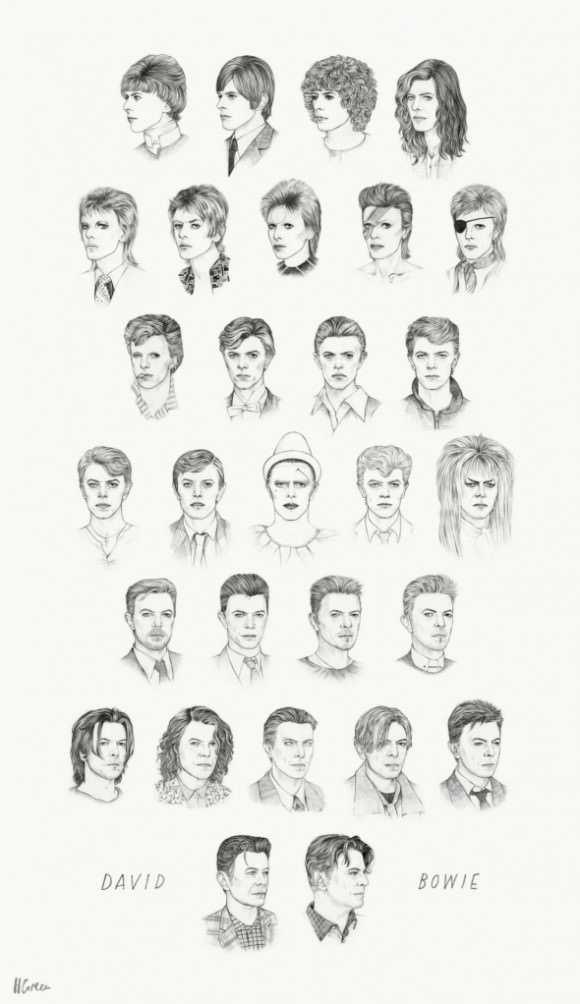 Illustration by Helen Green via Slate.

Last week David Bowie turned 68 years old, and I celebrated the fact of his existence by thinking about the many gifts he’s bestowed on the world. These include his amazing albums; his role as Jareth, the Goblin King in one of my favorite movies of all time, The Labyrinth; and his incredible sense of style, often manifest in his hairstyles. Bowie’s super rad hair has changed many times over the decades, and artist Helen Green has captured 50 years (!!!) of great Bowie hairstyles in GIF and print form. Thank you, David, for years of great hair inspo and thank you, Helen, for this wonderful documentation. 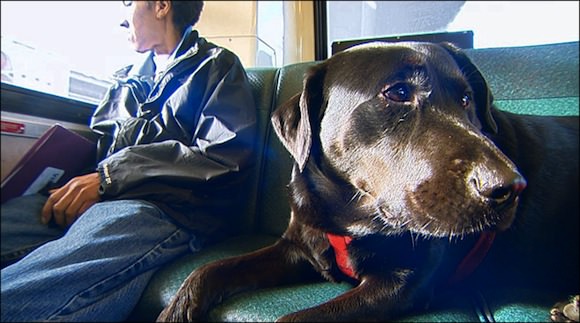 I’ve been wishing I rode Seattle’s D Line since news broke of this DOG who rides the bus BY HERSELF to the dog park. If only that adorable black lab was my seat buddy, my commute would be so joyous! I can only hope that a dog on my route learns this trick. 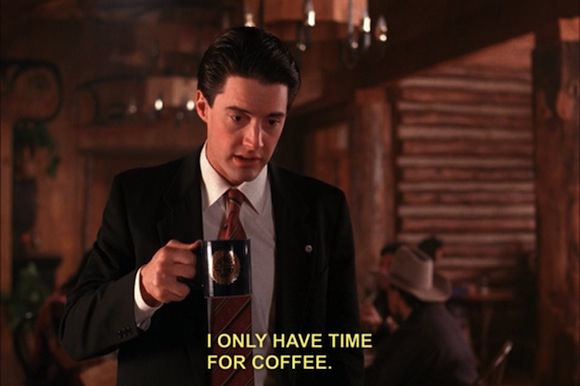 Finally! Confirmation has arrived that Kyle MacLachlan will return to the new season of Twin Peaks as the best coffee-lover ever, Agent Dale Cooper, or simply “Coop.” I am so excited for this that I cannot even really process it yet. 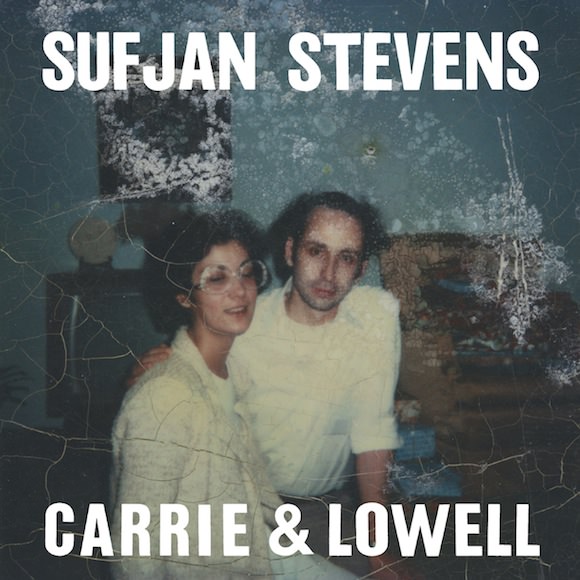 In more great news for my soul, it turns out that a new Sufjan Stevens album isn’t just a pipe dream, it’s due for release in LESS THAN THREE MONTHS. There isn’t enough time to emotionally prepare. The album is named for Sufjan’s mum and stepdad. I can’t take it. 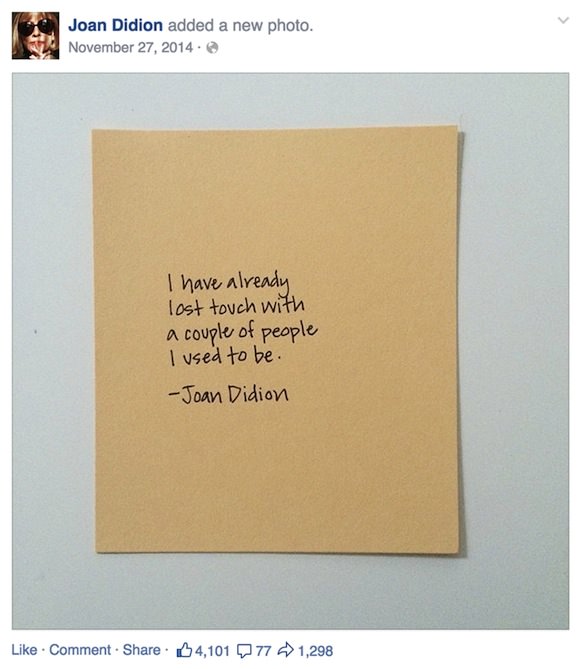 Image via The Hairpin.

Inspired by Joan Didion’s recent turn as a model for Céline’s spring/summer 2015 campaign, Haley Mlotek, editor extraordinaire of The Hairpin, has written the most hardcore essay on Joan Didion since Barbara Grizzuti Harrison’s scathing (and mean, and weak) 1979 takedown. Far from critiquing Didion herself, Mlotek instead critiques the literary culture—young, female, white, bummed, birdlike—that has granted Didion sainthood, not for her literary ability, but for the archetype she represents.

Joan Didion, as a writer, is the perfect cipher for the writing process: that mythical time of creation where you are consumed by a painful, wrenching, autonomous urge to lay bare your thoughts, and the resulting sentences are beautiful enough to take away the breath of anyone lucky enough to read them. They remove all oxygen from the writer, leaving only a shell of a woman at her most beautiful: frail, small, weighted down only by a silky dress and nothing as obtrusive as actual human flesh.

This image ties in all too conveniently with the minimalism of Céline, whose recent ad campaign Mlotek understands as “a trolling of the most epic order.” Instead, she promotes a culture where women writers don’t feel the need to BE Joan Didion, but rather enjoy Joan Didion—or not—and to not be shy about either position. 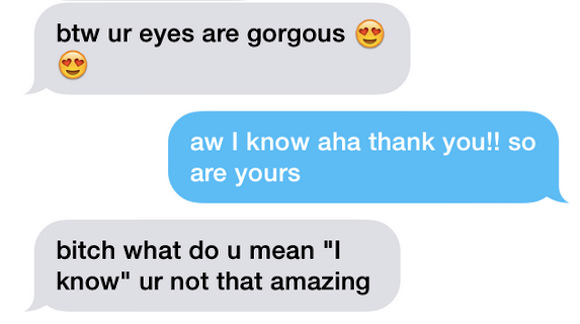 Maybe you’ve been there: You’re chilling on social media, minding your own business, when a random dude pops up out of nowhere to “chat” and tell you that you’re cute. Sometimes it feels good, but mostly it’s invasive or creepy. If you ignore these dudes, they get mean, and criticize you for not replying. Gweneth Bateman did a bit of a social experiment to find out what happened if she replied to compliments from dudes on social media—but not in the way they’re expecting. Turns out, that when she simply accepted a guy’s compliment with something like “I know, they’re my best feature!” these dudes were just as mean as if she’d ignored them, and quickly shut her down as self-centered or cocky. Apparently, they’re only comfortable when they’re the ones bestowing esteem on women, and they find the idea that a woman might understand and own her hotness and awesomeness to be totally bewildering!

The journalist Kim Kelley eats, sleeps, and breathes extreme metal. She’s spent the last 12 years covering bands from metal’s fringe genres, which is no small feat considering probably 95 percent of metal fans are unruly heathen dudes. She’s always been different, including being born with ectrodactyly, or “lobster claw syndrome,” the same condition the character Grady Stiles has on American Horror Story: Freak Show. Recently, at a circus sideshow, she was reunited with a childhood acquaintance. Erik was born with osteogenesis imperfecta, and he’s the founder of the one-man performance art and music project, Velvet Crayon. Kim Kelley interviewed Erik for Wondering Sound about birth defects, rock and roll, being “born a freak,” and the impact and importance of AHS: Freak Show. 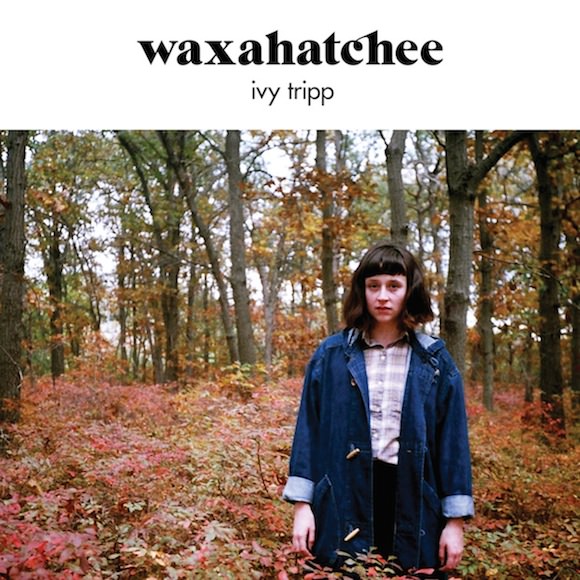 The Crutchfield sisters are some of the coolest twins around. Katie and her sister Allison have been in celebrated punk bands, separately and together, since they were in high school, including Bad Banana, PS Eliot, and Swearin’. Waxahatchee began as Katie’s solo project, but Allison has joined the band just in time for the release of Waxahatchee’s new record. Ivy Tripp, Katie Crutchfield’s third LP, is due out on April 7, on Merge Records (yes, THE Merge records, at various points, home to Neutral Milk Hotel, the Arcade Fire, and Camera Obscura). Katie’s previous record as Waxahatchee, 2013’s Cerulean Salt, was widely praised by critics. Rolling Stone named it among its albums of the year and described the album as “rubbed-raw heart-to-hearts about hanging with other miserable young people, waiting for the fun part to begin, and starting to get the suspicion this might be the fun part.” Records by the Crutchfields are rich with sensitivity and strength, and the live shows will undoubtedly become even more intense when Allison joins the upcoming world tour, which starts next weekend in London. 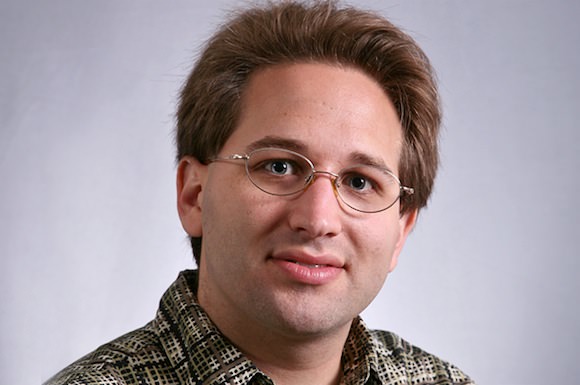 Also from the desk of the “Dudes are Dorks” branch of cultural criticism, Arthur Chu went OFF about why shy, nerdy guys are hypercritical of feminism in an article for Salon. Dubbing 2015 as the “Inaugural Year of the Bitter Male Nerd” (shots fired), Chu posits that men just don’t really understand the extent to which sexism makes women’s actual, real lives not only difficult but dangerous, too. “It’s women who disproportionately bear the burden of actual harm, of being directly victimized by other people.” He suggests that this is down to men often having little real world experience with gender inequality, whereas each woman, as Chu recognizes, lives through countless instances of “actual things that were done to her by other people against her will, without her control.” This piece struck me as a pretty solid example of how to be a male ally, in case anyone was wondering. 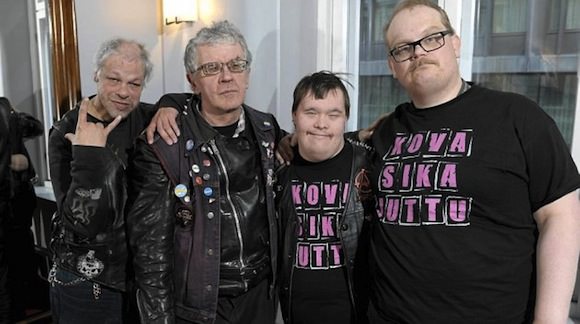 Photo via Caught In the Crossfire.

Finnish punk band Pertti Kurikan Nimipäivät (PKN) are in the early stages of qualifying for this year’s Eurovision song contest competition. That’s mind-blowing because, aside from being a totally raging punk band in the gosh darned Eurovision contest, all four members of PKN have learning or developmental disabilities. A documentary called The Punk Syndrome, focuses on the experiences of the members of PKN, and on how they’ve found friendship and liberation through punk rock. I mean, they toured with HARD SKIN last year (who once made a song with Joanna Newsom, that’s how you know they’re awesome), so winning Eurovision would just be the next logical step! Visibility for non-allistic people in punk and hardcore is so important, and for PKN to win Eurovision would be incredible. Go PKN! I’m rooting for you!

The Canadian composer and musician Caribou has decided to spoil his fans with The Longest Mixtape Ever, a 1,000-track-long YouTube playlist of songs that comprise a “musical history” of his life. He explained to Fact Mag that, The Longest Mixtape is a thank you to his fans, whose support has made him the internationally acclaimed star he is today. Go straight to YouTube to listen to the full 1,000 song playlist.

As if an almost three-days-long mixtape wasn’t enough excitement for one week, this Thursday, FKA twigs released a new self-directed video for the track “Pendulum,” taken from her new album, LP1. In the spirit of her previous eerie and otherworldy videos, in “Pendulum,” twigs turns into a glamorous spider tied up in the web of her own hair.

So, this is the icing on the cake of this week’s musical news. Bjork posted a sweet, hand-written note to Instagram announcing that her new album Vulnicure will come out this March. Seriously, what is this wonderful week? 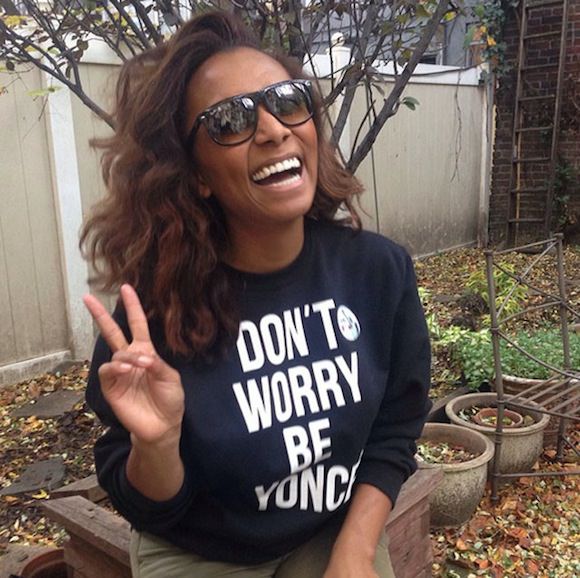 Photo via The Hairpin.

As a weekend act of self-care, I recommend that you read this Hairpin interview, in which Fariha Roisin talks to Janet Mock about her self-care rituals,. (See what I did there? Yep.) Janet talks about what self-care means for her, which includes setting boundaries, reading, pop culture, Audre Lorde, and cultivating safe spaces. 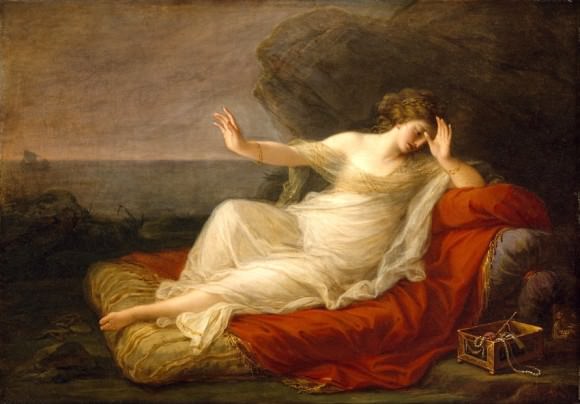 If you like your revenge tunes served up with language analysis, looky here! Damion Searls, the language columnist at The Paris Review Daily, takes a look at the “best I-just-got-dumped pop song ever,” aka a 600-year-old poem by Sir Thomas Wyatt called “They Flee From Me.” In his piece, Searls examines how the word “deserves” has shifted meaning since Wyatt penned his mopey rhyme. Sooooo interesting! 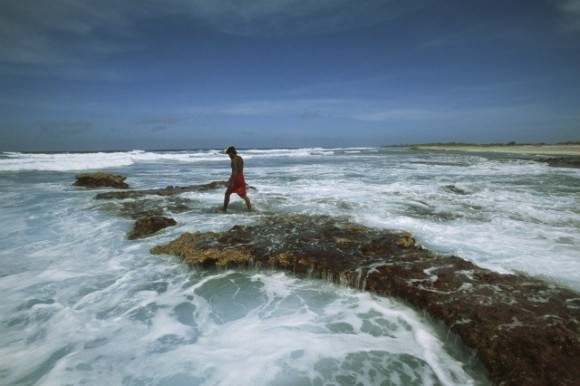 It is hard not to feel more and more frustrated and helpless about the deterioration of our environment, and a new study published this week about sea levels doesn’t bring any good news. A team of scientists has come up with a better way of measuring the rise in sea level, which occurs because of several factors, including the heating of the oceans thanks to global warming, and apparently it has increased much more than previously believed—about 25 percent more. I hope that governments, businesses, and individuals, like me, can consider changing our behavior in order to reduce the impact of our actions on the earth. 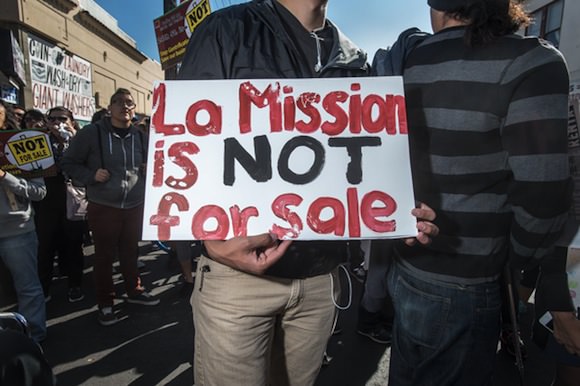 Have you ever heard people ranting about gentrification and been, like, Psshhhh, everything changes, including where you live, so what’s the big deal? This week, Colorlines ran a video about a guy named Kai whose family was evicted from the Mission, a neighborhood in San Francisco. The video gives a glimpse of what people lose in the process of relocating, since gentrification isn’t just a “natural” thing that happens, but the gnarly process of rich people coming into a neighborhood and pushing out people who have less money just because they can pay higher rents. 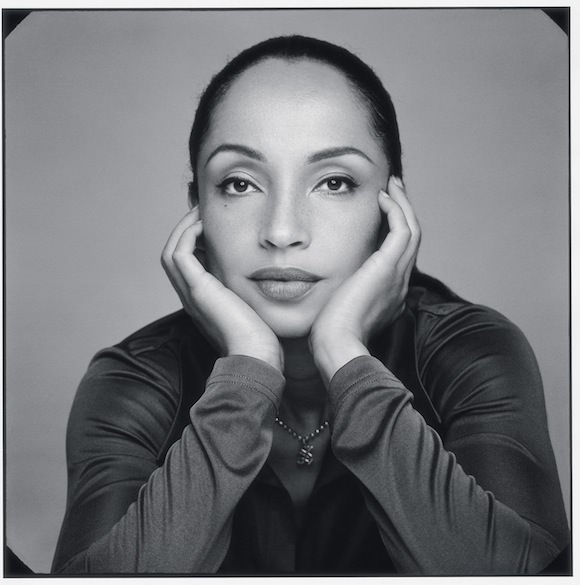 It was Sade’s 56th birthday on Friday—happy belated, queen—and to mark it, The Fader republished an in-depth feature on Sade by Ekow Eshun, which was written way back in 2000. I would have never found this insightful piece of writing about one of my faves if The Fader hadn’t dusted this one off from the archives. The first thing I ever wrote for Rookie was a Hero Status piece about Sade: I’ve always been enchanted. Ekow Eshun’s feature details her “complex relationship with fame,” and Sade is quoted as saying: “I just want to be who I am in the end, that’s all you are anyway.” For someone who has sold over 50 million albums and acquired huge fame, I admire how she’s been able to maintain control over her life. ♦