A song premiere, plus a pep talk on creativity. 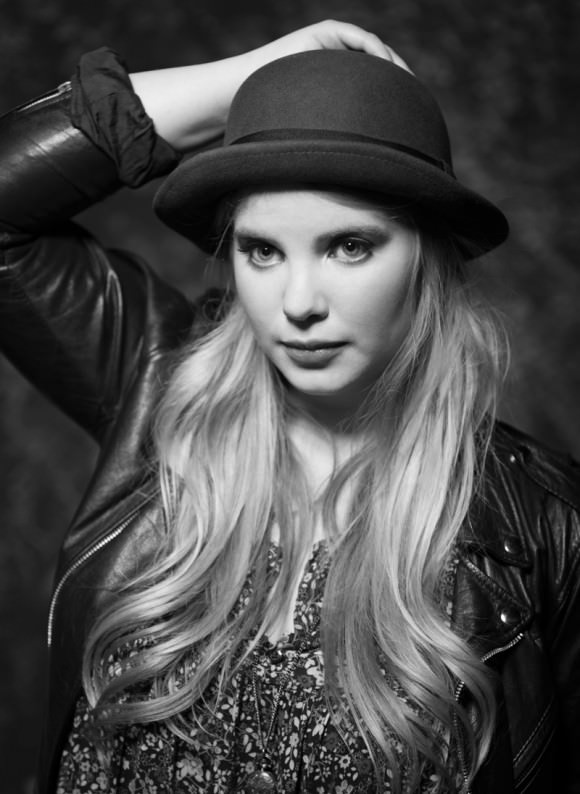 The Canadian singer-songwriter Samantha Savage Smith writes precise, gut-wrenching lyrics that pinpoint the struggles and wonders of heartbreak and longing, but she sets them to melodies that make me think of sunshine and lazy afternoons. If you listen to her brand-new song, “Fine Lines,” even one time, you’ll know the chorus by heart. And that’s a good thing! Listen for yourself in this exclusive premiere:

See what I mean! Last week, I talked to Samantha on the phone about her new album (it comes out January 27 on Pipe & Hat), creative control, and being open to trying things you’re not necessarily good at—yet.

CHANEL: When did you realize you wanted to start making music?

SAMANTHA SAVAGE SMITH: It was sort of a progression. I started singing when I was young, and then playing guitar at 11, and then writing songs—really bad two-chord songs.

How do you describe your musical style?

I would say it’s indie pop music, and the songs are quite personal, as well. But it’s not super attached [to a genre].

“Fine Lines” echoes what a person might feel when they’re in and out of relationships. What is it like to write and sing about love?

In real life, I’m the worst at keeping my mouth shut. [Laughs] So it was more of an outlet, just to, like, get it out there. Over time, people have confronted me. They’ve been like, “That was me?” and then I’m like, “Oh, well, yeah, actually. And this is awkward.” The album is about love, but it’s also about a lot of challenges at this point in my life—being in my mid-twenties, and being in music—challenges other than just heartbreak. In some ways, it’s empowering because it’s a nice way to unleash the fears or stresses I have about things.

Are there ways you like to express yourself, other than singing?

I’m not good at it, but [my band and I] will just, like, grab some cheap canvases at the dollar store and have painting nights. I have an Instax camera that I take a lot of photos with. It costs a lot after a while, but it’s really fun. I actually took the cover [photo] for my album with the Instax. I was playing with filters and stuff, like taping filters on the lens and trying to create effects.

You write your own songs, and you make your own cover art. How does it feel to create something that is so wholly yours?

With this record, I was involved in all the processes of making it. This time, I had more of an opportunity, from square one. From the early demo-writing stages, to actually being in the studio, it was all hands-on everything. I was like, “This all has to be approved by me!” It was nice for it all to be a part of me. Something that ended up being really important, too, is that I wanted to feel comfortable with what I was releasing, and I wanted to be proud of it. Now I can take full responsibility. If you hate it or if you love it, it’s on me.

How did you decide to focus primarily on music, rather than photography, for example?

When I was in high school, I wanted to paint, and I wanted to go to art school. Then I was heavily involved in drama [class], and I was like, “Oh! I should be in theater.” But I was also playing in bands and writing music. I moved up to Vancouver and did stuff for fun and continued those hobbies, kind of touching on everything. It’s funny how over time you see where your focus is naturally, and where your ambitions are in wanting to create something. [Music is] what feels natural and sort of the easiest, I guess.

You’re based in Calgary, right? Why did you choose to live there?

I was born and raised here, so my family’s here. Calgary’s cool—I kind of like how it’s small. Downtown is a small pocket, and you see a lot of the same faces. The music scene here has a really nice community aspect to it, so you get a lot of support within it.

What kind of music did you listen to as kid?

My very first CD purchase was Swan Lake. I wanted to be a violinist, which never happened. And then I was really into the Spice Girls—I still am. I also had Fiona Apple CDs and I loved Our Lady Peace. In high school, I started finding, like, the Clash and Joy Division. My mom brought out her Blondie CD, and I was like, “I like this!” I also loved Simon and Garfunkel’s album Bookends. I had it on repeat all the time. I actually really liked jazz, too. I started singing jazz songs when I started taking voice lessons.

What did you take away from voice lessons?

If you’re getting private lessons it’s more hands-on, and you’re forced to be present in your learning, even just the technical aspect of it. I remember my first voice teacher made me lie on the floor and sing, and I was like, Why am I lying on the floor? I couldn’t figure out what she was talking about, with using your diaphragm. I was like, “I don’t know what that is, I don’t know where that is in my body, I can’t feel it!”

Over time, you feel the technicalities of singing. I can appreciate it. Like, I was having issues with singing last year, and I was just feeling really out of breath all of a sudden. I saw a voice teacher, and she said that I’d disconnected my diaphragm. What happened was that I was practicing, but I wasn’t singing with my diaphragm anymore, and that’s what was causing the issues. It’s a very technical aspect, but it helped me become self-aware about how I was singing, and now it’s no problem.

What do you do when you’re in a creative rut?

I don’t worry about it. I just go and do something else. If you can’t write a song or you’re not feeling inspired, you’re really only going to be inspired by your actual circumstances anyway, right? It’s usually because something is complacent in your life already and you’re just stagnant with the same old, same old. So, get out of town!

Now that it’s a new year, do you have any advice for making changes or integrating new skills or experiences into your life?

Do it! That would be my advice. It’s healthy. Everything that I do now is an experiment. Even two years ago, I never would’ve played or written a lead guitar line. I was like, I’m a rhythm guitarist, and that’s what I’m capable of. But now I do it, and I love doing it. I’m happy, and I’m getting more comfortable with it. Even though I [once] told myself, I’m not good enough to do that, or really felt that I was at the skill level to be that good at anything. Luckily, I’m around people who are awesome musicians, and when you’re with people who are better than you, it pushes you to improve. I’m not shredding yet, but I wouldn’t say I’m a bad guitar player. But the thing about that is working up to it. And again, not totally shutting yourself down like, “Nope, can’t do that.” Actually you can, it just takes time. ♦