A non-elegy to a beloved uncle. 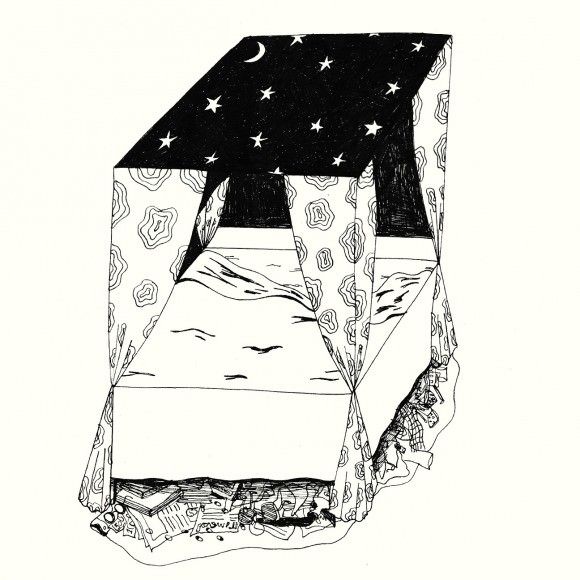 He worked as a short-order cook for most of his life. He rarely slept. He stood about five feet, eight inches in his stocking feet. Often, he wore black nylon socks. He changed his socks on a more or less daily basis, and his white sleeveless T-shirt, but waited until his kitchen whites could be described as something else entirely before changing them. He tried to grow an afro—it was the times—but his hair only grew out on the sides. He wore green-tinted bifocals and rarely brushed his teeth. He regarded washing as a nuisance, or a waste of time. Time could be better spent elsewhere—not on his body, but on someone else’s body: new loves.

He had an unconditionally high regard for women. Even though those he was attracted to were generally taller than him, he referred to them as girls. He never explained why that was, but wouldn’t that make him—perpetually—a boy? He must have amused them.

He had dated my mother when they were both teenagers. He’d say: “Marie? The girl of a thousand steps.” He never danced. Often, when my mother greeted him, she’d say his name in an exaggerated West Indian accent: “Ed-gare.” He’d smile. He enlisted in the army during the second World War. Then he re-enlisted during the Korean War. When asked why, he said: “I never want to see here what I saw over there.” There were photographs: him wearing army fatigues, looking nearsighted in Europe with his buddies; him looking nearsighted in Korea, standing protectively next to women wearing traditional dress.

Sometimes the women were smaller than his sister, Bea, of whom he was particularly protective. She was a hunchback and a dwarf. If you looked at her funny, he could shut you down with a look. Once, someone took a photograph of the two of them, her younger brother bent over her in an act of benediction, or a gesture approaching a hug. Their mother was critical; self-absorbed; a whiner. He would not hear a word against her. She came to visit her son and his wife every weekend and telephoned him almost daily. He called her Mama, and no one was allowed to complain about her, because the patience and care he had to exercise to deal with her was greater than any criticism. His goodness in that regard far outweighed one’s criticisms.

After his shifts, he’d drink from six until midnight, or until one or another bar closed. Often, he drank with his wife, who was high-spirited; dramatic; a child of privilege who always wanted to renounce it. She managed something like communism in her own bed. This was achieved by taking him into it, and in her work as a nurse, where her job was to put others first. He and his wife fought like new lovers their entire time together. (They were married over 30 years.) To her, he’d say: “You’re full of shit and your heart pumps pee.” To her, he’d say: “Oh, blow it out your ass.” The invectives they hurled at one another often involved body parts. Later, they’d make love. Their language—harsh, amused—was separate from but equal to their love; their love needed the distance of their language in order to survive and be, otherwise they would have been too close to it, and maybe they would have smothered it. Their bedroom was a mess. Newspapers, old clothes, crumpled dollar bills, bags of Valium (his wife was a nurse), pocket change. One could also find certain books under his half of the large four-poster bed: Frank Harris’ My Secret Life, for one. After she died, he’d grow wistful about her from time to time, and say: “She was a pretty little brown-skinned girl.” She was taller than he was.

When I was on TV once, he said “Goddamnit!” to the television set. Only he noticed that his nephew was wearing mismatched socks. When I got too sarcastic, he’d say: “Watch your mouth.” His nephew wondered how he could. He asked his nephew where he was going every time he saw him, and his nephew never felt put upon. Care is different from being monitored. Every child knows that.

He loved all sorts of people. Often, his nephew dragged people home to meet him. Later, his nephew realized he was looking to compare the people he brought home to his uncle, his ideal. What he loved about his uncle: his frankness and humor; the thing that attracted him to other boys first, always, was their humor. In his life of looking for connection, he connected to boys who could make him laugh, and also in those boys he looked for that which his uncle had because of his sister: a sweet tolerance of difference and horror of vanity. Once, a high school friend visited. She was a singer and liked to have a klieg light on her wherever she stood. She told stories about her family in Kentucky. After she left, he said: She’s OK, but somebody told her she was pretty once. I realized that my uncle was right: Unlike the Greeks, one could never equate beauty with goodness. Once, I introduced him to a Dutch lover, who arrived for the dinner wearing leather. He and the uncle talked about the war. Another time, I invited a lady friend over. She had short hair. From behind, the uncle thought it was another boy. When she turned around to greet him, he saw the lipstick and the charm and smiled. Then he said: “Goddamnit!”

When I went to Paris for the first time at 25 years old, he asked me if I had been to Pig Alley.

My uncle rubbed his chin and smiled and said: “No, I mean Pig Alley.” Years later, the choreographer Karole Armitage performed a duet with the legendary Joseph Lennon. In part two of the piece, she wore high, high black heels. The designer of the show had picked them up in Pigalle and convinced Armitage to wear them in homage to the girls who worked the streets there. There was my uncle again, but in a downtown New York theater context. He was everywhere in his nephew’s mind and heart, including worlds his uncle knew nothing about.

He worked until the very end of his life, despite his difficulty breathing. He still went to bars. When he died, he was in a taxicab, a tube in his nose for assisted breathing, on his way to visit one of his girlfriends. He was nearly 80. His daughter, who had no heart for such things, asked me to help the undertaker dress him. I purchased a blue tie for him, and a blue shirt. I also put white gloves on him, to comfort the many years of grease burns on his hands. When he died, I scarcely wept. He had lived what he had: his life. ♦

Hilton Als is the author of White Girls and The Women and is the theater critic for the New Yorker.