Shadow of A Doubt 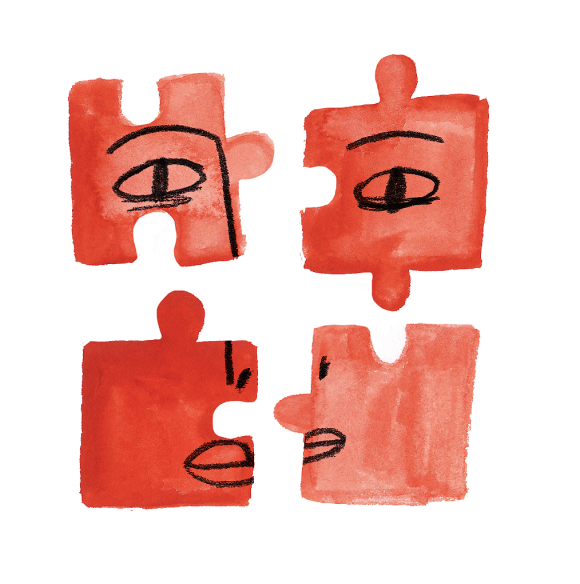 The worst part about my grandfather’s death wasn’t his death itself; he left gently, with my mom and her siblings around him. It was that my grandmother, his wife, didn’t know, and still doesn’t know, that he passed away. She doesn’t even remember him.

My grandmother has advanced Alzheimer’s disease, a neurodegenerative disease that causes memory loss. It’s an insidious illness, creeping in its early stages as simple forgetfulness or lack of attentiveness. Eventually, it leads to far bigger problems, like losing the ability to speak or understand words, and exhaustion and extreme disorientation. My grandmother struggles with simple tasks like walking. She can remember a select few things—often memories from early in her life—but names, recent events, and basic skills like feeding herself escape her. She is far more than the sum of her symptoms, but her Alzheimer’s is scary—she’s still here, but it feels like she is already gone. I don’t want to let go of her, but how can I hold on?

I’ve been by my grandmother’s side since she received her diagnosis, but I still don’t completely understand her Alzheimer’s. I know the symptoms, and the medications she has to take, but I don’t know what it’s like for her. While much of her old personality is gone, I can still see traces of emotion on her face—confusion, fright, sadness—but I can’t help her with them because they’re within her mind, in places I can’t soothe. I see how scared and disoriented she is. I wonder how much of her is still here, and how much of her old self has to go through this. It has been so hard.

If you are reading this and are in a similar position, I want you to know this: You are incredibly strong, and brave, and selfless for getting this far, no matter where you are in the process of caring for your loved one, or for yourself. Every minute you haven’t given up is another minute won, and I’m so proud of you. When someone you love is in pain, it can feel amplified within you times ten. It can be easy to give up and hope it all goes away on its own.

I’ve been in that dark place before, the place that wonders whether it would be easier to ignore it completely and distance myself, the place that feeds on “ignorance is bliss”—because seeing the struggle sometimes hurts too much. I’ve wanted to not deal with it, to stop visiting her, because I thought another visit would sap the last bit of my own personal resolve. There are times when I feel so weak and vulnerable, but being vulnerable is important. It reminds me that I am alive and that I love someone, enough to give them so much of myself without anything to gain in return.

My grandma’s room in her nursing home is sparse: There’s a table, a bed, a dresser. The only indications that she lives there are the pictures of her family, each labeled with the people’s names and relation to her, and a small stuffed bear my youngest sister gave her. When my family and I visit, we usually end up showing her pictures of herself and people she knew when she was younger. Flipping through scrapbooks, I see how beautiful and alive she used to be. There are photos of her at the beach in the 1930s, looking like a lithe, blonde siren in a bathing suit. There’s one of her on her wedding day, white tulle skirt swirling around her, her face and smile eerily like mine. I realize how little I’ve connected the emaciated, lost version of her with the grandmother I knew when I was seven or eight: bright and caring, always handing out candy or cookies, funny and intelligent. Now, when she puts a hand on my shoulder and scans my face, I can tell she recognizes that I mean something to her that no longer has a name. She struggles for the words, finally asking, “Who are you?”

I used to feel too scared to talk about what my grandmother was going through, because I thought I had to be permanently strong for her sake, and for my mom’s and my family’s. But the more I talk about it, the easier it gets, because I no longer have to be a statue of courage; I can be a granddaughter, who cares very deeply about her grandmother, and who is surrounded by family members who feel the same way. It also helps to take a step back and realize that I’m not supposed to take this on as an infinitely unshakeable one-person army: When I feel like my pain can’t possibly get any worse, I remember my mom, how many more memories she has of her mother, how this is her mom she’s losing, someone who has been with her through decades of life.