“Have specific goals. Say them out loud. Do the work. Celebrate your achievements.” 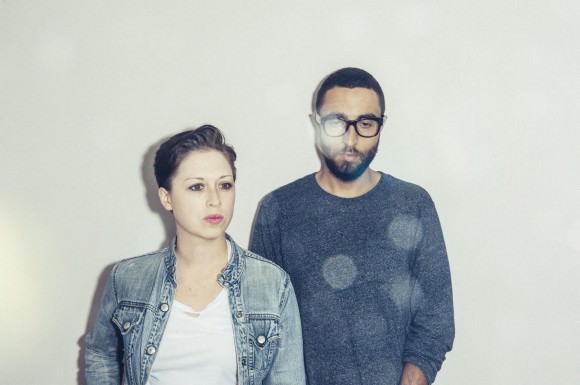 Little Brutes is Rachael Cantu and Harlan Silverman, and their Desire EP, which they are self-releasing on January 13th, is lodged inside my brain for eternity. The L.A.–based duo’s sound is very minimal—with guitars, handclaps, a heartbeat-like drum machine, and Rachael’s sweet and friendly vocals—and every element seems very specifically placed. It’s careful music, but not in a way that makes anything unfun. Desire’s soft songs are also super encouraging and hopeful, with lyrics like “You lift me up, mmm-hmmm,” (“Carefully”) and “Here we go now, let’s make our own way” (“Make Our Own Way”). Each is like a little jewelry box that you open to find something unexpected, like a butterfly or a daisy petal. Have a listen to them all in this very special advance stream!

You’ll be hearing a lot more of Little Brutes—“Make Our Own Way” is about to be the theme song for the NBC show One Big Happy, which premieres in March—and it’s heartening that Rachael is as encouraging as her songs—she’s a super bright, upbeat person who puts a lot of good into the world with her music. Rachael cut her teeth in the Southern California punk scene and has been a musician for decades, playing shows with musicians such as Tegan and Sara, the Get Up Kids, and B.B. King. I spoke with her over the phone on New Year’s Day about playing for kids, why she almost quit music, and how she was creatively rescued by her wife. (Awww!)

JULIANNE: Hi, Rachael! Happy New Year. Do you have any resolutions?

RACHAEL CANTU: No! [Laughs] I have a general plan to be a good person.

So, how did this EP come together?

In a really funny way! I was trying to figure out what was next for me, and I was debating stopping music. I didn’t want to tour anymore, but if I wanted to do music, I had to tour, so I thought I should just figure out something else. Then I started volunteering with an organization called Songs for Kids, where I would go to children’s hospitals and sing songs. So that kept me in music, but it made me interested in a different way, that wasn’t about me anymore. I’m so thankful that it kept me playing.

Then, my wife, who is a television writer, created One Big Happy, which is the show that we’re going to have the theme song for. I hate saying that, just ’cause of ego, I don’t want people to think that’s why I got it! But you know, I’ve been in this business a very long time, I’ve paid my dues. So she actually challenged me to write “Make Our Own Way,” the first song on the EP. [At first] I said no, and then she came back to me a couple weeks later after trying other music that wasn’t working, and was like, “Don’t you just wanna try?” I was like, OK, fine! We went into the studio and wrote the song, and that’s what sparked the entire EP. It was so much fun because it was such a new sound for us, and we were both totally on the same page. We didn’t even talk about the sound we wanted, we just sort of did it. We were just so excited to do pop music, something we’d never done before. Especially playing pop music for kids made me fall in love with it again.

I want to know more about playing music with Songs for Kids. How did it rejuvenate your interest in music?

I didn’t even want to play guitar anymore—I’m self-taught, and I’m very stubborn, and I didn’t want to take lessons. But I hit a wall, and it’s hard when you’re just not learning anything, and everything seems kind of boring, the sound of it was boring to me, I was just so over it. But [Songs for Kids] has this binder full of songs by [artists] from Katy Perry to Bruno Mars. Having to learn all these songs for the kids—I loved it. I learned new chords! It was kind of like the way I started, by learning cover songs. I loved playing and everything was new, and every time I learned something new, it was awesome. So this was the same feeling! Something fresh, and to see the kids get so happy when you know that one pop song they love. It made me just want to keep playing more and more and more. I love it so much. Only an asshole would not like doing this! I love doing it for the kids, but it’s also for me.

I know that you have a punk-rock background, but were you ever into DIY as a philosophy?

Yeah, totally! It’s why I don’t have managers, why I don’t have a label. I don’t like giving over that control, it’s so weird to me. And to see what I’ve achieved on my own makes me feel good. Like, Yeah, I did that! It’s so funny, I never thought about that before, but yes.

One thing I noticed about Desire’s songs and the lyrics is that they seem really personal and intimate, but they also seem open-ended, like you could interpret them any way you wanted.

That’s exactly how I like to write! I kind of hate it when people explain what a song is about, specifically. I actually learned that lesson ’cause I told a friend once what one of my songs was about, and it was a song she really loved. It really colored it for her, and she couldn’t listen to it anymore! I like making songs that are universal and that you can connect to and make your own story. Listening to someone else’s music, I wanna be able to make it about my story instead of knowing it was written about a specific person. It does come from a very personal place, but it’s specific and nonspecific.

Do you remember the first song you ever wrote?

I don’t remember what it was, but I remember being very excited that I could. I think I was 15. I grew up playing instruments, but guitar stuck because it was my own thing. And when you’re a teenager, music is your out—it’s not what your parents listen to, it’s your band that you discovered. That’s your private music. So I just locked myself in my room and taught myself guitar. It started from playing cover songs. I would probably be really embarrassed to reference my very first song though, I’m sure it was very angsty and full of some emotion that I had never felt. Like a fake love story or something. I wrote those for a long time.

What were you like at 15? What was your teen steez? Were you a very feelings-y teenager?

I’m a pretty mellow person, and I’ve always just been that way. I was happy, but I felt things as if I was watching a movie of it. That feels dramatic, but in such a beautiful way. I listened to a lot of punk. And musical theater!

Punk and musicals are such a good combo of dramatic emotions.

Right? It oddly works together so well. I highly recommend it for every teenager!

Do you remember when you first felt like you were in control of your own life?

Yes. I moved to Boston when I was 21. I figured out I was gay when I was 19, and I grew up with a very great family, but I had to figure out who I was. I knew I had to get out of that, and I went with my first girlfriend and that felt amazing. I was able to be out, I made my own friends, I worked and paid my own bills. That was a huge life experience, and I’m so proud of myself for doing that. I grew up in Orange County, California, and I wouldn’t even drive to L.A. by myself at like 19 or 20, so to move across the country—I’m so glad I did that.

That is so awesome. Do you have any advice for Rookies?

Have specific goals. Say them out loud. Do the work. And celebrate your achievements—always celebrate! ♦