Literally the Best Thing Ever: Delilah

She loves to talk about love—and celebrate love with killer ballads from 1992! 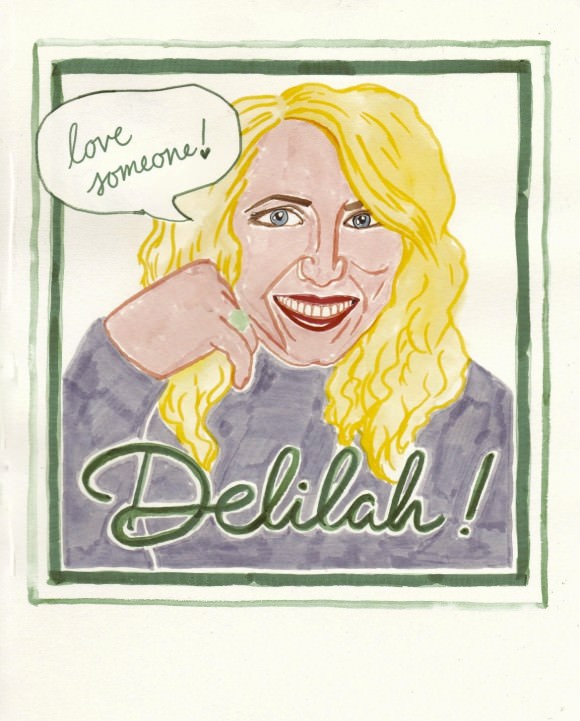 If you’ve never listened to her nationally syndicated radio show, you are missing out on the wonder that is Delilah. For those of you who don’t already know, Delilah Rene Luke—who is so great that she only goes by her first name, like Cher or Beyoncé—is the host of a nightly program (called—you guessed it, Delilah), in which she gives advice to and plays dedications for her loyal listeners. Her voice is so dreamy and comforting that it makes you feel like you’ve just had a giant cup of hot chocolate and swaddled yourself in a fleece blanket, and she spends a few hours every night taking calls from listeners and playing the sappiest, gentlest lite rock available. One minute, she’ll be talking someone through a broken heart, and the next, she’ll be playing “From This Moment On” by Shania Twain. It’s sort of like tuning in to a universe where everything is going to be OK, thanks to Delilah’s benevolence and access to mom jams from the ’90s.

The best part of Delilah is the sheer corniness of the entire thing. Her catchphrase is actually “love someone,” and she’s introduced by radio bumpers that trill out her name in the dreamiest way possible: “Deeee-liiiiii-lahhhh”:

The show is SO built to soothe that it’s almost parodic—the word “love” comes up about every 30 seconds, and people cry both happy and sad tears over the phone as they tell Delilah about their lives. Every episode is filled with everyday people sharing honest emotions, and it’s sort of amazing to listen to. People are so open with Delilah! They talk to her like she’s their BFF, or their mom, or one of those magical guidance counselors you only see in stereotypical teen movies. Callers tell her that they’re afraid; that they’re lonely; that they just can’t get over a broken heart. And she tells them not to give up, to love love itself, and to heal by listening to Celine Dion. Magical stuff! It’s like an inspirational coffee mug come to life.

I’m OBSESSED with the callers who ask Delilah to dedicate songs to lost loves, partners in struggling relationships, or best friends. Who are these people? Will those they long for ever hear the songs they’re requesting? Did they ask their friend to tune in to hear a “special” dedication on Delilah that night? Do they listen every night, hoping their request will be reciprocated? There’s so much on the line when you put yourself out there—on national radio!—to talk about the people you care for. My favorite callers are the ones who sound a bit weary about everything—they aren’t sure if their relationships are going well, they don’t know what’s next, and they can’t believe they’re discussing their business on the radio with a total stranger. There’s beauty in being so open, and by the end of the call, Delilah seems to give these callers at least a momentary sense of peace (and a jam to rock out/cry to). It’s a reminder that just being kind and being a good listener can really help someone who needs to vent.

It’s fun to giggle at the, well, Delilah-ness of it all, but the schmaltziness, to me, makes it even more human and lovely. People love love! And they love to talk about love! And they love to celebrate love with a killer ballad from 1992! Surrendering to the corniness allows me to be gooey and emotional—to remember that sometimes, just communicating with others, through words or songs, is enough to help me feel more grounded and safer in the world.

Look, I am a nervous person. I panic, like, all the time. I started listening to Delilah while driving home from a night job I used to have because I liked her soothing tones, and I liked hearing the voices of strangers discussing their problems frankly. The drone of unfamiliar voices talking about love, or sadness, or getting over loss made me feel connected to the world, and less lonely: There is something lovely and heartbreaking in the idea of a person calling in to a radio show for advice, and I felt like perhaps I wasn’t the only person who felt like they needed someone to talk to once in a while. It was like being in group therapy, only without the uncomfortable couches and reminders to make eye contact.

I am the first person to make a smartass remark about anything, especially when it comes to matters of love. Overt sincerity makes me nervous at times. But Delilah is SO sincere, and so syrupy, that even my Grinch-y heart grows two sizes just by listening to her. All she wants in the world is for people to love one another and to perhaps feel moved by a soft rock classic or two, which is the very least anyone can ask. It’s hard not to like her: How could you not adore anyone who believes so strongly in love…and in the healing powers of Shania Twain? ♦