Let people with zero qualifications besides also being people guide your whole future within!

I’ve been very stressed out lately. My parents tell me that I should study more so I can get into a decent college, but, honestly, I just don’t want to do that. I hate studying enough as it is. I can’t imagine spending at least four more years preparing myself for a job I will probably hate, as well. The worst part is, I’m only good at studying. It’s not like I have any other talents or interests to fall back on. The small amount of things I’m good at, I hate, but I don’t like anything else, either. I’ve tried everything—music, art, writing, sewing—but there’s nothing I feel passion towards. What should I do? —Rose, 16, Denver, CO

Hey, Rose Parade. I know it seems like you NEED TO FIGURE IT ALL OUT RIGHT NOW or else consign yourself to a dullard’s existence in, like, the office from The Office for the rest of forever, or else just be broke or something—either way, involved in a boring life populated with boring people and it’s all boring forever-bore. Let’s do away with the constant freakout over the imminent monotony of eternity, because it’s fucking up your life right now. Studying is already punishment enough without a thick layer of self-pressure on top. Part of the reason you’re lodged tight in this hatred of every single talent or interest you could pursue is because you’re not actually doing it. You’re watching yourself doing it, going, WHAT DOES THIS MEAN FOR MY FUTURE? and then becoming disappointed and disillusioned when nothing magically reveals itself as 100 PERCENT DEFINITELY YOUR LIFE’S CALLING—THIS IS IT: YOUR RAISIN D’EXIST-O.

Why does future-you get to (with any luck) be happy, but present-day-you has to suffer? Why don’t you start with being kind to yourself right now?…she said beatifically, as though it were that easy! (It’s especially not easy when you’re depressed. Are you? That is also worth checking into, because if you are, contending with that’ll be a big part of dispelling this churning dissatisfaction with the complete offerings of human life.) Those facile-sounding questions, though, are sadly valid. How to begin the alternate beginning is the hard part. (Also, how to talk about this without sounding like a Dr. Phil self-help moron is the hard part. We just have to be earnest for like one second in order to get through this; I’m sorry. IT’S ONLY FOR THE WELL-BEING OF YOUR FUTURE, no big deal!) It has a lot to do with putting an end to asking, “Am I good at this?” or, “Do I like this?” and instead doing things because they occur to you, or because you want to test them out, and seeing how that goes.

Recently, I committed myself to PAYING ATTENTION TO THE ACTION I AM DOING AS I DO IT. This is expressed in events major and minor: Forcing myself to watch the mascara wand as I jostle it along my eyelashes, as much as dissolving inside a Rothko at the museum while I lean into the person I love’s shoulder, as writing a shopping list for my grandmother, as all of it. I try not to expect anything of anything, or of me, and it happens, and I love it better. Keep your eyes sharp and your head focused out instead of in. When you stop dissecting everything you go through in the world like it has the potential to augur who you are and what you do henceforth, you’ll begin to respond to the things around you honestly. You’ll just join yourself within whatever action you’re up to—you will conjure yourself by forgetting, instead of needlessly second-guessing, yourself, my vault of Rose gold. Then you can self-examine about how it went and felt and whether you liked it at the end of the day, in your bed, where you’re resting after really and truly having done something without fixating on some pre-hypothesized test result. Again: You are already studying enough.

Music, art, writing, and sewing are all hunky-dory, but I find that I need them all, plus more, to build this kind of scaffolding in me that ensures I don’t lean too heavily on one support beam and then watch it snap like Jaws’ toothpick after I’ve expected it to provide the sole foundation for my existence. (Well, except sewing. I tried to embroider some cursive on the back of a denim last summer and my boyfriend, cruising by, asked, “What does that say? ‘BRUISE COFFIN’?” I had meant it to say “HEART ANIMAL,” basically the opposite tonal concept. Sewing was not at risk of being tasked with providing the sole foundation for my existence after that.) I am not like you in that I have always known I wanted to write, which sounds like one of those irritating self-mythologizing things writers say to evince that they’re really writers, but is true: This is the prime way I know to feel good in or make sense of the world. STILL, even that lifelong certainty is fallible, and it doesn’t exist in a vacuum. In each period of my life, much of which has been spent, ratio-wise, as a teenager, I have found myself thrashing around inside some net of my own misery, it’s because I am not insulating the writing thing with other things, or because I’m spending too long on one thing, period (a job; a relationship; school).

This is even truer when the sole concern of my life is my life. A really good way to stop thinking about YOU so much—to not worry if you’re right, if you’re wrong, if you should NEVER HAVE EVEN TRIED TO PICK UP SEWING IN THE FIRST PLACE, UGH—is to do things for other people. (Especially ones you don’t know, since that strips away the value differential of, “I did this person a favor, and now they owe me!!” that some of us feel from time to time.) Yes, actually—definitely help strangers, because that will thrust you into a moving planet, and you will be interacting with all kinds of people, doing valid, necessary work in places like soup kitchens or after-school tutoring programs or libraries or food pantries. Another charming, cruising-for-a-bruising-type self-analysis that I’m gonna gift you with right now, in addition to always understanding the deep and irrepressible truth that, as…I believe it was Chaucer said, in his private correspondences, “Wrytying—the pen, the page, the piss-ant pyrsonalyty—is, like, totylly my raisin d’exist-o”: Helping out at the community dinner in my neighborhood once a week was one of the most crucial aspects of ripping myself apart from a voluble, ever-present despair I listened to a lot last year. I ferried boxes of milk and yogurt from the basement despite having linguini biceps. I scarfed down a Solo cup of kielbasa and onions offered to me by Elena, the RAD old lady who runs the show. I learned to cut up a tray of spaghetti so you can portion it onto plates with a pair of tongs in a flash (shoutout to Elena, again). I assessed oozing trash cans in the kitchen—how to get them to stop oozing?

It’s far easier to get out of your own way—to PAY ATTENTION—when you’re working because you’ve chosen to spend your time working—not because you have to—and you have discrete, tangible tasks in front of you to complete, and you’re doing them to the end of boosting up someone or something else. One by-product of this is that you see how you react to the world, and you can use that experimentation to help others as you help yourself: Even if you hate it, it will not have been a waste of time, like nearly everything else is. (Oh, also? See everything as a waste of time and it simultaneously levels the playing field when you decide to apply the framework of that mindset the other way around: Everything becomes a miracle just as readily. [So definitely tell your parents college is a waste of time/miracle and that’s why you’re not doing it, is what I’m saying here. They will definitely see and understand your unassailably pristine logic and not immediately try to send you to WEED REHAB. Advice answer over; I think I nailed this one?])

The only way to make a permanent mistake right now is to do nothing. Keep doing things, especially if they’re not IDEALLY TAILORED to you—at least you will know more about the world that way, and then, if you hate it, you can avoid it in the future! Also? The same applies to studying, which really isn’t so bad. I’m obviously biased, but reading stuff you wouldn’t choose for yourself is a way of seeing the world before you can see the world with your own (focused, attentive) eyes. You hate it, and I hated it, and now I find myself doing it on my own all the time, for nothing, because it unlocks the hell-crypt of my head and reminds me that I exist among and inside a million contexts, and also one prodigious, all-encompassing one. Sorry I’m telling you to study—soon, you never have to again if you don’t want to—and also, please don’t tell anyone I said I liked it. I’ve got enough problems maintaining my tuff persona as it is (see: “writing a shopping list for my grandmother,” for cripes’ sake).

Square up with the reality that you’re going to have to do some shit you hate in this life, and that it will galvanize you and make you want to do more, and better. Your question is a manifestation of this. It’s fine if you don’t want to go to college, but make sure you do SOMETHING. Work at places that don’t matter to you or do; write a play or don’t; join the Peace Corps (you will be traveling the globe AND doing good works AND, I guarantee, very much out of your head) or AmeriCorps, or just skip around the country or wherever while farming via WWOOF-USA, or volunteer at home; fall in love eight hundred times or none; embroider a denim vest poorly or well. This is basically a note taken from Jincy Willett‘s epistolary short story “The Best of Betty,” which is about a person who is actually qualified—if anyone is—to give advice: 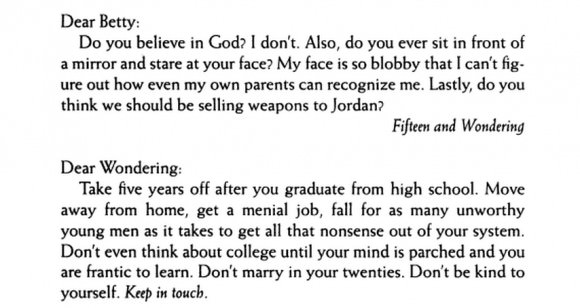 It’s boring to only care about yourself. I hate everything and see it as a waste of time when I do, but if I vary my brain and life and include service in it…IT’S MIRACLE TIME, MY DUDE, MAKE A WISH OR 12 ON THE AVALANCHE OF SHOOTING STARS THAT IS THAT SELFSAME EVERYTHING I ABHORRED A SECOND AGO. You have options—try to see that as an impeccable stroke of luck (I often think of this Chris Ware quote: “Being able to say ‘I don’t know what to do with my life’ is an incredible privilege that 99 percent of the rest of the world will never enjoy”) instead of letting indecision stifle you. Love you lots. I hope you figure it out and also stop trying so hard to figure it out, Roseadocious. —Amy Rose ♦

Inquire about your future, present, past, and whatever other temporal dimensions you’re stumped as all get-out about in an email [email protected], and include your AGE, FIRST NAME/INITIAL/NICKNAME, and CITY, ya time traveler.