On breaking up with breakup songs.

Why Can't I Be You: Catherine McCormick 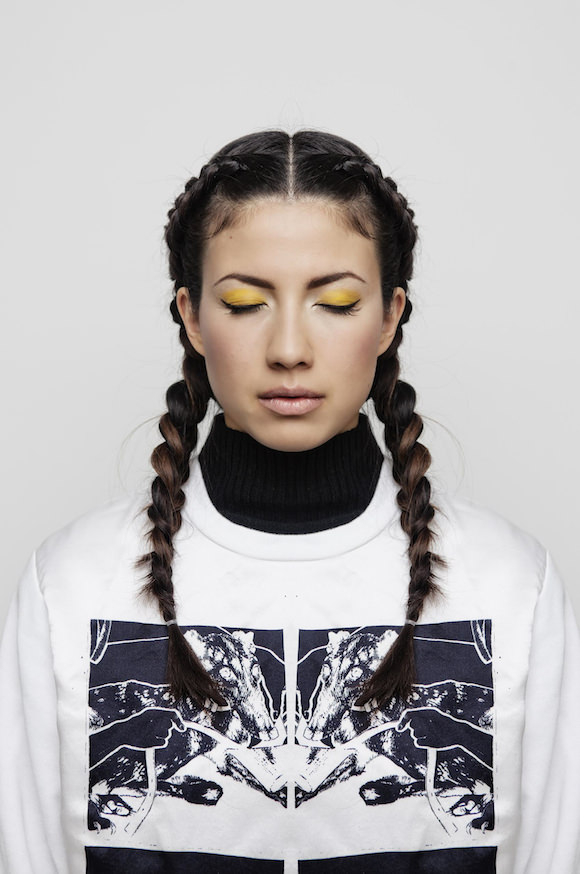 The British singer-songwriter Emma-Lee Moss, self-dubbed Emmy the Great, established herself as a master of the breakup song on her first two albums, First Love and Virtue. The lyrics were devastating in one line, and comforting in the next. Emmy’s latest EP, S (out January 27 on Bella Union), is a little different. Despite changes in the subject matter (she’s looking outward more than inward these days), the songs still have that super emotive, hit-you-right-in-the-chest quality that Emmy does so well. In this exclusive premiere, she’s giving you one of the very first listens:

Emmy and I talked on the phone last week about how she grew up in Hong Kong, is a total bookworm, and put breakups behind her.

EMMA-LEE MOSS: Hey! It’s been a bit packed. We started mixing on January 3, and as soon as that finished we went into pre-production for touring. It’s been fantastic though, I’m hardly feeling the cold.

You wrote S, your new EP, while traveling all over the world. Did moving around have an effect on you and your songwriting?

On everything, yes! I think it’s healthy to go to places where no one knows you, and where you have to explain yourself—at least it was for me. I got rid of that thing where you feel like you’re the center of the universe, and I understood how different my perspective is from other people’s, and how little I figure in other people’s lives. It made me want to fight for the right to write songs; before [writing] was more like scratching an itch. I felt like I was shaken up and down until the person that remained was a much realer version of me. It was like I’d been filtered.

You’ve said that on this record you wanted to “engage with the outside.” Why did you feel the need to break away from a more introverted sound?

Over the past two years I’ve become a lot more extroverted, probably for the reasons I described above, and maybe growing up, too, or just circumstances. I used to shut myself off alone to write a whole album. It would just be me in my head for weeks. But [the songs on S] were written everywhere: in notebooks, last-minute in studios, in public, and with people all around. I actually wrote one of the songs on the EP while the person it’s about was talking to me. I started to feel like music is a conversation and I want to share it. I wasn’t so precious. I asked other people to contribute, I wrote with other people, and I worked on stuff I’d never worked on before, more technical elements. It felt more like an event.

How did you approach writing new songs on different subjects?

It was hard! I was actually going through a breakup as I began this album, but I couldn’t be bothered to write about it. There just wasn’t anything left to say for me about that [subject]. Initially I made this impulse list of things I had to do that summer—become a better person and eat pizza—and I thought that might be a good starting point. I even thought maybe the whole album would be called The Adventure List. The only thing that list did was make me make more impulse decisions. But [as a result] I ended up in L.A. So in a way it did help me to write.

How important are visuals to you? Do you see specific images when you’re writing and recording?

The internet has made me think and communicate in a much more visual way. I always used to borrow from pictures when I couldn’t think of the right word, so more and more I find that images add to what I’m trying to say. I wouldn’t want to release a video that I didn’t have a part in, and I’m lucky that I get to work with friends on this stuff, so I can get really deep into certain details. I want to present people with our best idea and let them take it from there.

The video for “Swimming Pool” is really, really beautiful. Can you tell me about the intention behind it?

Oh, thank you! At first we were just trying to film cool visuals. But the more we went forward with it the more I thought it communicated how technology makes us think we’re surrounded by people, but your hologram can’t actually jump in a pool and save you. But I love for people to have their own interpretations of it. I’ve read stuff on the internet where people have said it means different things. The funniest thing I read was that the video is about me going around my big house and showing off all my stuff.

I was into books. I used to hide books to read in my lap at dinner and think that my parents couldn’t see [that I was reading]. I remember telling one kid that my favorite book was the encyclopedia. I didn’t see him again for about 10 years. My favorite book was definitely not the encyclopedia, I was just a really pretentious child. I was also into telling other kids how to play. Yeah, for some reason I didn’t have many friends! I’m surprised my parents didn’t dress me in a tiny suit and boat shoes and make a joke of me.

Your mom is Chinese and your dad is English. What was it like growing up with parents from different backgrounds? And how did you deal with moving to London from Hong Kong as a kid?

My parents are weirdly perfect together, although my mum couldn’t be more Chinese and my dad couldn’t be more English. I always felt really English growing up, probably because I was into certain books as a kid, and because I had such a connection with my English granny. But when I look at pictures or videos of myself, I see more Asian influence. There’s a cutesiness that has never gone down well in England, but it’s very Hong Kong, and it’s ingrained in me.

I got a lot of Americanisms from growing up in Hong Kong, too, since a lot of the kid culture in the ’90s was American: grunge and NBA and stuff. It’s been interesting to see how our twin cultures affect other people in my family—like my dad. He’s an artist in the Chinese tradition, and he does these shows with other Chinese artists, and he’s the only white man there, wearing an outfit with a Chinese collar. I made these two English folk albums because that felt authentic to me, but nowadays, when I sing to myself in Chinese, that feels authentic, too. Zadie Smith‘s books have always articulated a lot of stuff I can’t yet figure out, about how immigrant or dual nationality life feels. It’s a mash-up. To me, it shows how arbitrary these divisions are. It seems like we’re all just hanging out, trying to get some food, trying to get some love, and constantly testing out new versions of ourselves.

Who inspired you to be creative when you were little?

My dad is the most creative person I’ve ever met, and he taught me to channel everything into making stuff. I met Dave [McCracken] recently, and he’s had a huge influence on my creativity; turning ideas into music is all he really thinks about. I learn a lot from the people around me: I’m a real advice hoarder. If you sat next to me on the subway and gave me an inspirational quote I’d store it away. If it’s been printed on a poster of a dolphin, I’ll take it.

Is there any advice that you’ve received over the years—or any advice you would give—to someone trying to make it in the music industry?

Stop worrying. Self-doubt it good because it makes you refine things, but don’t give in to it. And don’t quit, just make it work. It doesn’t have to cost thousands or look like Mariah Carey’s Christmas shows. Just be creative. ♦

Born in Virginia, Sammy Maine was a military brat before moving to Bristol, UK. She writes stuff for the Guardian, Drowned in Sound, and BUST. Despite losing her accent, she still can’t quite pronounce the word “orange” properly. Find her on Twitter.