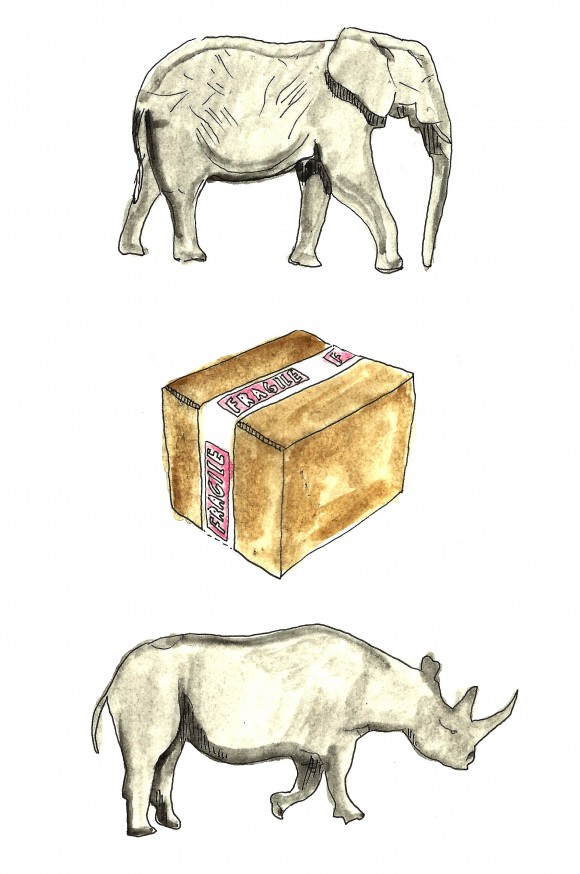 Books and cartoons about Babar the Elephant captivated me when I was a kid. In a practical sense, I had little in common with Babar, a fictional tennis-playing pachyderm, but I wanted to be like an elephant, so I felt a kinship with him anyway. In my family, elephants were metaphors for being thick-skinned, thoughtful, and intelligent, like Babar, who was also regal, well-traveled, and educated—the personification of dignity. He came to stand for many of the things I wanted to cultivate in myself. (At the time, I didn’t know enough history to understand the neocolonialist critiques of the storybook and the underlying themes about so-called civilization. What I took from his story was that he was independent, brave, and perpetually optimistic.)

Being elephantine came with trickier qualities, too: My family often teased me about my elephant-like steel trap of a memory. This cognitive superpower was celebrated when it came to academics or trivia nights, but also reviled when I harped on with exhaustive explanations and rebuttals about past conversations and events I remembered long after my parents or teachers forgot them. This inability to forget became a challenge when an ex cheated on me with a close friend, a co-worker tried to make me the scapegoat when he violated policy at our work, and a boss unleashed a tirade upon me for being “too nice” to interns and junior staff. Each of these instances were hard to let go of as I tried to make sense of how to navigate my relationships and boundaries. The same mind that made late-night cramming for tests easy also made it difficult to erase even the most intricate and detailed components of painful memories. My elephant memory has been most well defined by what a fortune-teller in New Orleans’s French Quarter said three years ago, upon first laying eyes on me. “Gal, you are so sweet and kind, but what most don’t know is that, for you, it’s never easy to forgive. Why? ’Cause you don’t forget a thing.” No matter how hard I’ve tried to compartmentalize—to shrug hurts and microaggressions off my shoulders—my mind keeps them tight with righteous anger, and the only way to shake it is to talk about it, which has been very hard for me in the past.

The basic human act of accepting your feelings might seem normal to many people, but I grew up in a family of scientists who challenged me to prioritize facts, which made me feel alienated when I tried to process hard emotions out loud. I was discouraged from “wasting time” speaking about sadness or other feelings that could not be “solved” and taught to support my views and needs with logic. I feared being perceived as hysterical or weak, so I questioned my ability to be both emotive AND strong—and the inherent value therein. Throughout my teenage years, I was relentlessly teased for being “too sensitive” from some of my extended family members after I called them out for unsolicited and often rude comments about my weight, hair, skin, accent, or relationships. My dad sometimes described me as “fragile” when I complained about these comments. He thought I should just “toughen up” and keep it moving—that their remarks were a part of our culture, and that there was no changing that, so why make a big deal out of it?

His mindset was that I was wasting time by reacting to other people’s actions: I was told that I could only be responsible for what was within my control, so the blame should only be on me for responding with anger and sadness. It was as if being treated with disrespect and dismissal as a result of cultural problems didn’t make them personally hurtful, which wasn’t, and isn’t, true for me. Being racially profiled in boarding school by some of my elite classmates’ parents who talked down to me during Parents’ Weekend because they assumed I was on scholarship; being told by my white male English teacher to stop writing so much about feminism and race because it is “expected” from a black girl—shards of the pain I felt when they happened still remain in my elephant brain, and sometimes they dig into it sharply.

My mom lent a more sympathetic ear when I expressed individual pain over injustice, but she was also a stickler about the need to be “tough”—and I understood why. Both of my parents love me fiercely, but the hardships they grew up with drove their protective responses to my self-expression. Like a lot of elders from historically marginalized groups, they encouraged me to work harder to accomplish twice as much as people with privilege. They grew up during a time when exposing your fear or feelings could literally cost your life, and their number-one priority was to arm me with tools for simple survival. In the Jim Crow South, Mom endured violence at the hands of racist aggressors during lunch counter sit-ins to end segregation. I grew up hearing stories about her and fellow student organizers learning how to remain still while being attacked by white police officers and hecklers who targeted women in order to provoke the men sitting in with them to fight back and compromise their non-violent protest.

Mom didn’t know how crying or talking about someone mistreating you could really help anything because of experiences like those. While she always encouraged me to express myself and acknowledged that she understood my need for release, she discouraged me from crying because she thought it had no productive result. For her, tears were reserved for funerals (if they were even shed then) and private spaces. During breakups, work drama, or my receipt of rejection letters from colleges, she asked me to ask my therapist how to make myself “less sensitive.”

At least my parents’ feedback came from love, unlike what I faced from co-workers and bosses. After I entered the workforce, I sometimes found myself being faced with similar naysaying and undermining about my “sensitivity” regarding workplace bullying, racism, online harassment, and the culture of complacency in the face of adversity. After occasionally silencing myself due to external pressures, I learned to continue to speak up anyway: When I worked at a campus computer lab when I was 17, our older white boss told me and another black staffer that we would be “up a tree” if we didn’t meet his expectations on a project. I called a meeting with him about his use of harmful language, where he said was making a big deal out of a phrase that he would use with any staffer. Instead of backing down, I outlined the historic implications of his words, and my concern that he had only been heard alluding to lynchings in his remarks to staff of color. After I spelled this out for him, he kept his distance and was much more thoughtful about his language. I trusted my own outrage, and I won.

When I was faced with situations like telling a different boss that I wouldn’t accept being spoken to with a hostile tone, or even standing up for myself and my friends by reporting a racist restaurant manager who made disparaging comments about Muslims to her company president, the feeling of owning my power and being true to myself was rewarding even in the face of potential retaliation. It turns out that the cost of my soul doesn’t have a price tag—even if someone thinks I’m too sensitive.

Throughout my life, I’ve never been motivated by feedback that advises me to move forward without acknowledging disfavor and reflecting upon it. The only difference today is that I’m feeling unapologetic about rejecting resilience as defined by others. The biggest hurdle for me to overcome has been to fully embrace and accept the way I personally practice resilience without needing validation from the people I love the most, or view as authority figures. When I apologized to my therapist recently for belaboring a point about something that was bothering me, she stopped me and told me to stop apologizing for having human emotions and a healthy response towards releasing them. When she said that my biggest lesson was to believe her when she said I’m one of her most “balanced and thoughtful” patients, and to recognize that people who call me oversensitive have their own issues, something clicked. Now, I’m focused on treating my dedication to my personal truth like a superpower I can use to create wonderful things.

I wonder what it would look like if we moved away from defining resilience and dedication as endurance through suffering by any means necessary. Last year, Hillary Clinton spoke about the need for young women to grow “rhinoceros-like” skin in order to ascend into leadership roles. This happened during a time when I was advised by my former executive coach to adopt a “Teflon” skin, and in both instances, I thought about my former idol, Babar. Babar may have a so-called thick skin, but it’s natural to him—not a buffer against the rest of the world he created intentionally.

Sacrificing my mental health to make others feel more comfortable has never been worth the modicum of respect we get for “keeping calm and carrying on.” When we focus on perpetuating a narrative that places less emphasis on systems, culture, and toxic people to change, we imply that we must change. Righteous anger and desire to process our feelings is just as honorable as brushing something off as long it brings you back to yourself. The challenge is that we have a limiting (and sexist) definition of what it means to be strong and powerful. Truthfully, I have never seen anything as simple as a stiff upper lip fix such a complex, widespread problem, and neither will channeling all of my energy into changing the composition of many of the things I love about myself to suit it. So I’ve decided that I’ve aspired to thicken my skin for too long. I’ve embraced that I am not a pachyderm. I’m a person. I am tender, I am soft, I am gentle, I have feelings—and that actually makes me strong. ♦