The glamour is real. 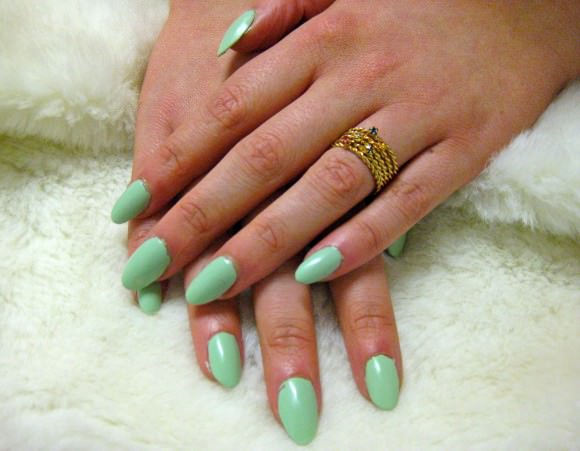 Lately I have been trying to embody the painted nails emoji in many ways, but the most obvious is by consistently having impressively manicured fingernails. Whether I’m sticking my finger into a jar of peanut butter or pointing it in someone’s face à la Jamie Lee Curtis, having long, sharp nails ensures that I look elegant doing so.

No matter how many vitamins I’ve eaten, though, I’ve always had trouble getting my nails to grow to the luxurious length I prefer. And getting fake nails done at a salon can cost major bank! What’s a girl to do? Apply glue-on acrylic nails at home! When a few of my good friends who wear fake nails first suggested this, my mind immediately went to those press-on nails that you’d get as a kid from the, like, party supply store, and that would fall off almost instantly. But after months of regularly wearing glue-on acrylic nails, I am here to spread the good news—and to teach you how it’s done.

The first time you apply and wear fake nails might feel a little strange, but each time you do it, you’ll be more of a pro. In fact, your nails may look so beautiful that they will start to interfere with your personal relationships because you’ll be too busy admiring them to listen to people. (I am warning you based on personal experience.) 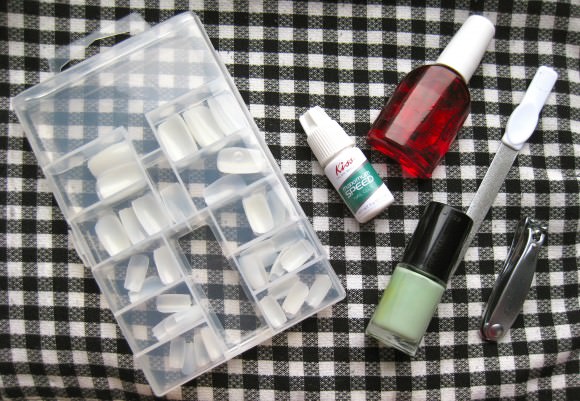 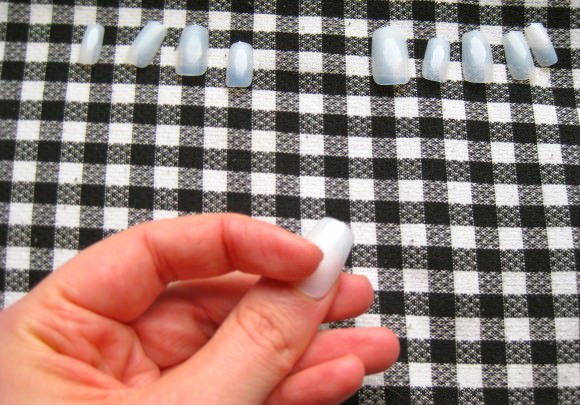 Try on the different nail sizes that come in the package to see which fits each finger best, then line them up in corresponding order for both hands. If you look closely on the back of each nail, you will see a tiny outline of a number that indicates the size. Write down the numbers in order, so that next time you do your nails, you’ll already know your sizes! 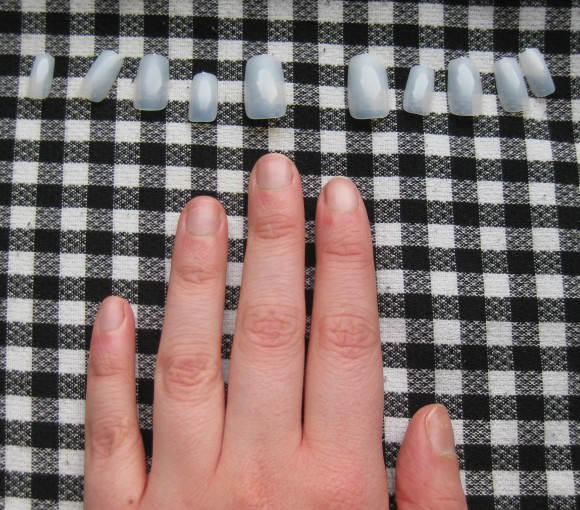 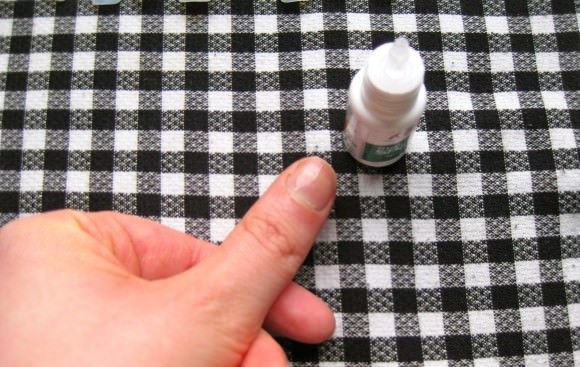 Your nails should be clean and polish-free. Squeeze a tiny bit of glue on the center of your natural nail and spread it with the bottle tip. 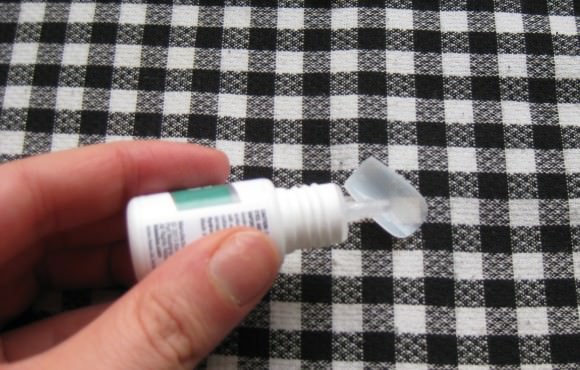 Squeeze a tiny bit of glue to the bottom (rounded side) of the fake nail, spreading it so the glue covers about the same area as your natural nail size.

Press the fake nail to your natural, glue-covered nail and hold for five seconds or so. The first time I wore fake nails, one of them popped off my finger as I placed my hand on a pole in the subway train and onto the lap of an old businessman who was talking about hedge funds with his acquaintance. While this was admittedly kind of gross, it was also thrilling and maybe, JUST MAYBE, a metaphor for being a young woman surviving late-stage capitalism, IDK. But nail glue is super strong, so err on the side of using less than you need. It’s easier to re-glue nails that come off than to remove a bunch of nail glue from your fingers!

Repeat gluing until all your fingers are covered with fake nails. At this point, the unfiled tops of the nails will look pretty uniform and unnatural. 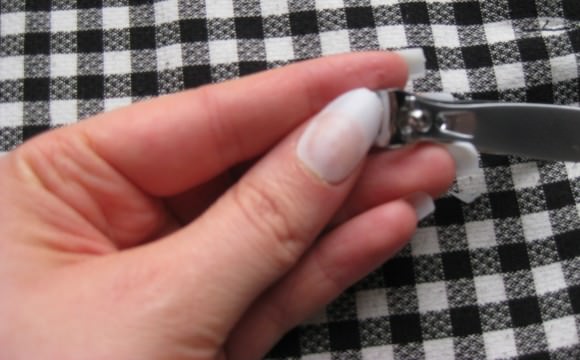 Now it’s time to cut and file your nails down to your desired shape. For a pointed oval shape like mine, use nail clippers to trim the corners away. If you want square nails, use nail trimmers to clip them to your preferred length. 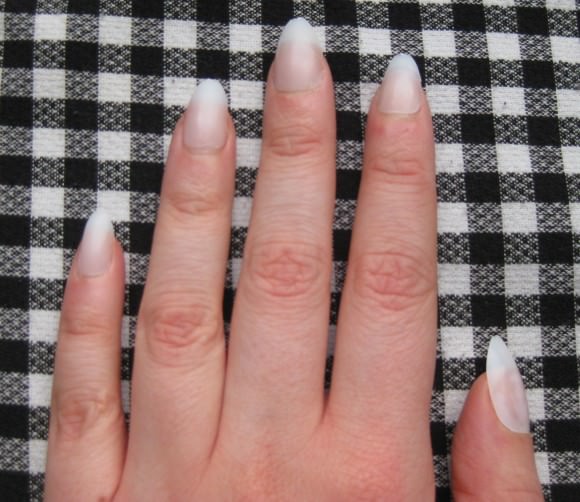 With the metallic file, file the fake nails into smooth shapes, like the ones above, filing in one direction (rather than back and forth). 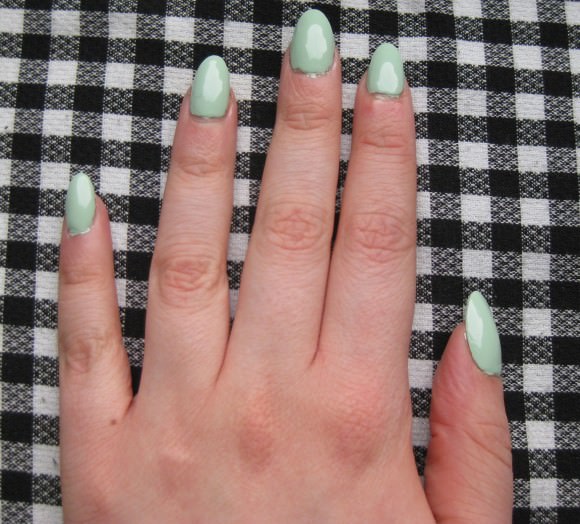 Paint your nails with two coats of polish. One exciting aspect of fake nails is that polish tends to dry much fast and appear more opaque than on natural nails! Let them dry, and then finish them with a topcoat, like you’d use for natural nails. Clean up any errant polish with nail polish remover and a cotton swab. Let the topcoat dry completely before using your fingers, like you would with natural nails.

Congratulations, you’ve mastered Acrylic Nails 101! The nails may be fake, but the glamour is real. ♦