How to critique offensive behavior or speech without totally losing it. 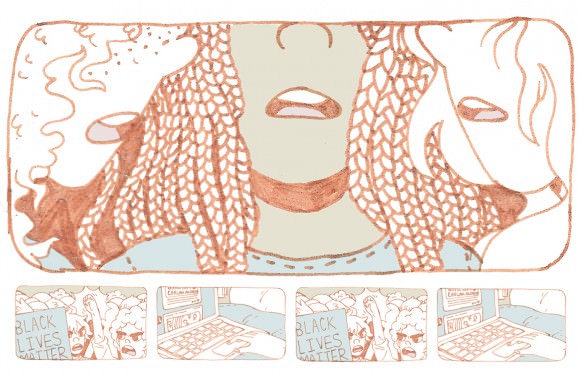 There are high-profile platforms for taking political action, like lobbying and public protest, and then there are much more intimate ones, like standing up for what you believe in during a conversation, even with your own friends. Calling out (or “calling in,” a much less hostile term that envisions discussion rather than just finger-pointing) is totally necessary sometimes, but can also be difficult to do in a way that’s articulate, appropriate, and effective. Emotionally, it’s tough to be called in yourself, too: If this has happened to you, you know that it’s mortifying, because despite your best efforts and intentions, you’ve caused hurt. I talked to Lola, Suzy, and Jamia about ways to let people know their language hurts us, and how to deal with being called out ourselves. —Estelle

ESTELLE: Hello, friends! I have been thinking a lot about the fact that one of the most day-to-day political activities we can do is talk to one another. That’s it: just the act of talking to another person can affect us in a bunch of different ways/bring up really interesting and important issues. In the amazing book Citizen, Claudia Rankine quotes Judith Butler: “We suffer from the condition of being addressable.” Language affects us, and is a way we affect others. But because of the multiplicity of ways we can engage with one another—in person, through email, and more flexible written mediums like Tumblr or Twitter—I feel like it’s also so easy to misspeak, hurt another person, and/or just plain fuck up.

This means I could easily say something super hurtful based on lack of knowledge. I wanted to talk to all of you about calling people in when this happens IRL. It’s such a tough thing to say to someone else, “Hey, what you said hurt me or makes me feel uncomfortable,” and to have done to you, but it’s SO important for everyday learning and growth. I want to be more thoughtful about this in a proactive way, and come up with strategies in ADVANCE—not just react to it when I accidentally say the absolute wrong thing. But first: What are your experiences with calling people in, or being called in?

SUZY: We should preface this by attributing the concept of “calling in” to Ngọc Loan Trần. They first wrote about calling in in a 2013 article in Black Girl Dangerous: “Calling In: A Less Disposable Way of Holding Each Other Accountable.”

JAMIA: YES! Their work and perspective is powerful, and came at a time when I was in the midst of my own experience of being called out in a painful way. I have to say that calling in has inspired me to change my perspective many times more than calling out. For me, calling in is about recognizing and respecting our common dignity and humanity. I feel that people are treated so disposably in call-out culture.

Name-calling, mockery, and thought-policing do nothing to advance equality or build community. It pushes people to tune out, which is a shame. As a feminist activist with a public profile, I have been called out numerous times on social media. I’m often fine with critique that is focused and thoughtful, but I get frustrated when I receive rants, threats, or accusations that don’t apply to me and my work. I remember being called out on Twitter once and accidentally seeing a subtweet where someone had made memes of mean comments about me and some colleagues. The call-out memes did nothing to inspire me to listen or change my perspective; instead, it was alienating and harmful. The substance of their arguments were lost when there could have been a true moment for real discourse to happen.

Since I have experienced how terrible it can feel when you are called out in a mean-spirited and/or demeaning way, I try to approach people with respect and recognition of their dignity when I reach out to them with feedback or critique. Earnest input that is productive and helpful resonates much more than snark and slights.

ESTELLE: The term “calling out” is so alienating—like, you’ve lost, game over! And even though calling out—which I think of as just bluntly pointing out that someone has said something offensive—is a legitimate form of communication, occasionally I have seen people calling others out to end a conversation rather than prolong one, which feels counterproductive (although I can totally understand wanting to terminate a conversation that is offensive or making me feel unsafe). It might depend on who I am talking to; if it’s someone I don’t know whose opinions make me feel uncomfortable, I might just be silent, or I might want to call them out and leave it at that. But if it’s someone I want to continue to engage with in future (e.g. family, friends, colleagues), and I want to tell them their language is hurtful, I don’t want to “win the argument” and finish it there—I want them to understand how their language affects me or others, even if they didn’t necessarily mean to be hurtful or offensive.

“Calling in” feels more sustainable: It’s like saying, “I value you, so I am taking the time and effort to explain how you’ve hurt me, and I am calling you deeper into my life and beliefs.” And also, “I value you and understand you’ve made a mistake that doesn’t necessarily speak to who you are.”

So, for example, just say a friend says something offensive. Something I used to do a lot was just jump on that person, and say, “I can’t believe you said that! THAT IS SO RACIST/SEXIST/TRANSPHOBIC/STUPID ARGHHHHH GODDAMMIT.” (Definitely some of my best moments.) It just made me so mad and I couldn’t see past my anger in the moment! Still, I’ve been on the receiving end of such call-outs myself, and not only does it feel humiliating, but I also find it difficult to collect my thoughts, be a bigger person and open up a conversation from having been called out like that. A BIG NOTE: I am not criticizing those who angrily respond to offensive language. I know that it is exhausting to constantly be on the receiving end of ugly epithets or uncaring and cruel ignorance, and anger naturally surfaces at those times.

In the amazing article Suzy linked above, Trần describes how to call in like this: “I start ‘call in’ conversations by identifying the behavior and defining why I am choosing to engage with them. I prioritize my values and invite them to think about theirs and where we share them. And then we talk about it.” So if I wanted to call my friend in, I would say, for example, “Hey, when you said [offensive thing], I felt hurt and angry, because I am X/disagree that we can generalize about X/know that is a misconception about X. We are really good friends, and what you say affects me. Can we have a conversation about this? It’s an important issue for me personally.” Kind of seeing it as the starting point for a bigger conversation rather than ONE MOMENT WHERE EVERYTHING WAS WRONG AND IT BROKE US. It acknowledges no one is perfect, and that we can keep going, together, stronger.