Militant veganism isn’t for me anymore. 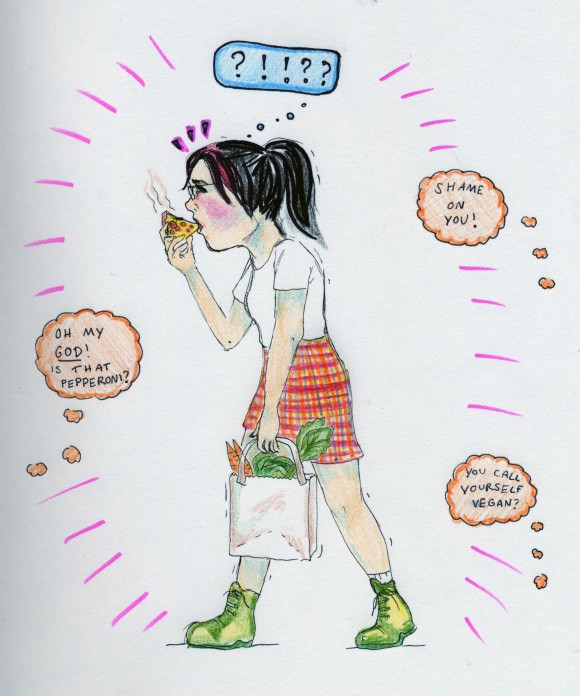 Recently, I went to see the latest Hunger Games movie with one of my best friends from high school. I ordered popcorn, of course—it’s pretty much my favorite part of going to the movies. When the cashier asked if I wanted butter, I said yes without hesitation. As my friend and I walked away, I told her sheepishly, “Usually it’s just butter-flavored oil, not real butter. That’s why I get it. And if it is real, I figure I’m only eating it every once in a while, so…”

She cut me off with a laugh and said, “No one’s gonna take away your vegan card, Steph.”

I laughed, too, genuinely and easily, and then I ate my popcorn drenched in maybe-real, maybe-not-real butter without a care in the world. But I did think about it later: the way I’d automatically defended myself to someone I’d known and trusted for years. Why was I still compelled to defend my “vegan card”? The answer is two-fold: I’m mindful of every food choice I make because animal rights has always mattered so much to me, and I feel the need to vocalize my decisions because people in the animal rights/vegetarian/vegan community (like many sociopolitical communities and movements) can make you feel like you aren’t dedicated enough. I know because I’ve been on both sides of it.

My interest in animal rights was sparked at the age of 10 when I saw an episode of Degrassi Junior High in which Liz, a character whose Chelsea haircut and outspokenness I liked, protests testing on animals. Caitlin, the Degrassi character I related to most because she was into books and theater, is inspired to write a school newspaper article and stage a boycott after seeing Liz’s posters of caged monkeys with the slogan, “This is torture!” and hearing about the painful tests that monkeys, rabbits, dogs, and cats undergo in the name of better conditioner and hairspray. Ultimately Caitlin’s views are called into question when Kathleen points out that medicine, like Caitlin’s drugs for epilepsy, are tested on animals. Liz tells her staunchly, “I’d rather be sick than hurt an animal.” This was also my first exposure to the dogmatic side of the animal rights movement. I thought, Why does it have to be all or nothing? Caitlin can still believe that cosmetic testing is wrong and speak up about it, even if she’s iffy about the medical side of things—and so can I!

I promptly went to our bathroom, gathered up the shampoo, hairspray, toothpaste, and my mother’s bottle of foundation, marched it all over to the phone, and started dialing the numbers on the back of the packages. I asked the customer service people if their companies tested their products on animals and if they said no, I thanked them. (Yes, this was pre-internet. Now, there are many different places where you can find this information online.) If they said yes, I told them that I thought it was cruel, and that there were other, more accurate tests that their company should use, and until they did, I wouldn’t be buying their products. (Of course, at 10, I didn’t make most of those decisions in my house, but when I explained why I wanted shampoo from Nature’s Gate instead of L’Oreal, my mom agreed to it. I also made sure that any cosmetics I bought on my own were cruelty-free, meaning I had a lot of Bonnie Bell Lipsmackers and Wet ’n’ Wild eye shadow duos.)

As I explained in a Rookie piece last year, I progressed from boycotting cosmetic companies at 10 to vegetarianism at 13 to veganism at 17, but I kind of oversimplified the reason behind that progression in that article. “I didn’t want to be a part of any animal’s suffering for any reason,” is what I wrote, but the deeper truth is that I empathized with the fact that they were suffering and couldn’t vocalize it.

I went vegetarian as my New Year’s resolution in eighth grade, roughly a year after I started cutting myself. I didn’t see the connection until years later when I had a better understanding of why I cut, which was to express the pain and anguish that I felt incapable of talking about. I think that part of the reason I remained so dedicated was not just because I loved animals and didn’t want them to suffer, but because I personally identified with them. It’s definitely why I transitioned to veganism.

I was a year out of an emotionally and sexually abusive relationship. For much of that year, I had a hard time eating. It started out as a control thing—I barely ate at the end of my relationship because it was one of the few things my abuser couldn’t control—but it continued because I was really disconnected from my own body. I felt used and dehumanized, like I didn’t even deserve nourishment. The idea of food sickened me. I discussed this with a friend whom I’ll call Bryn, who also self-injured after surviving sexual abuse and championed animal rights because she felt a deep love for animals. She was also the first vegan I’d ever met. It was 1996 and we lived in the Midwest—veganism was far less common than it is now. I knew so little about it that I asked Bryn, “But what’s the problem with dairy? Don’t cows just naturally produce milk? Aren’t we just living off their excess?”

“No, Steph,” she explained patiently. “Female cows are like human women. They produce milk when they have babies.” She described factory farming—how cows were artificially inseminated and the calves they gave birth to often became the meat I wasn’t eating; how they lived in tiny pens and were milked by machines, sometimes to the point where blood and pus came out of their udders. Used. Dehumanized/objectified. I related to this. I also thought, Maybe I can be comfortable with eating again if I feel like I’m making respectful choices. I was still struggling to advocate for myself and vocalize my feelings, but being an advocate for animals made me feel like I was doing some good for someone—and because it was something I could research and report on, I could be a lot more articulate about it than my depression or the trauma I’d experienced.

My greatest personal triumph in high school was when my philosophy teacher asked us to present our side of an ethical issue that we felt passionate about. I picked veganism, and at the beginning of my presentation everyone was questioning why they should care about the ethical treatment of animals. By the end of the debate, the only two people who were still trying to argue with me were a guy who staunchly believed that God put animals on the planet to serve and feed humans, and a girl who was really concerned that one day we might discover vegetables were sentient, and then we’d all starve.

Winning that debate felt really good. There was a thrill that came from taking the moral high ground and being self-righteous—a thrill that offset the pain and anger that I couldn’t express and the new frustration of my veganism being misunderstood by the outside world. When I went vegetarian, my mom had been supportive. She never cooked tofu, like my vegetarian friends’ vegetarian moms, but she never complained about making substitutions for me, and, as a teenager, I overheard her telling her friends that she was proud I was passionate. When I went vegan, I overheard her telling her friends, “It seems like some version of anorexia.” Veganism helped me work through disordered eating, so this was hugely upsetting. Instead of telling her that, though, I shouted at her, “How can you call yourself an environmentalist and a feminist and support an industry that is contributing to global warming and raping cows?”