A guide to showing up without getting in the way. 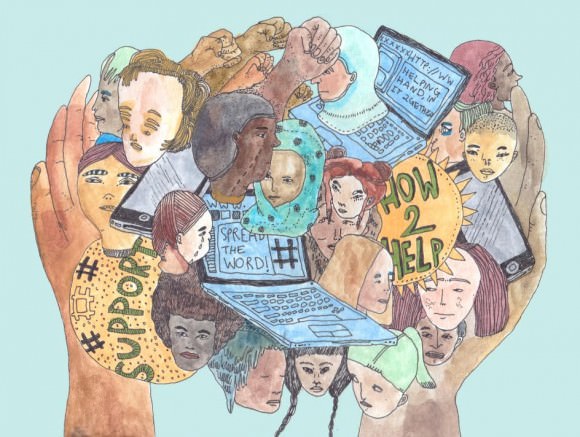 Last weekend, I strolled into an Oakland, California, herb shop and saw a sign printed with a message that stopped me in my tracks: “BLACK LIVES MATTER.” In three words, the poster told me that the business owners (who happened to be white) understood the power of using both their privilege and their platform, in this case to affirm black people’s humanity, and that they could be allies.

Through the #BlackLivesMatter movement, activists have been calling for an end to police brutality and systemic racism in the United States. In 2012, it formed in response to George Zimmerman’s acquittal in Trayvon Martin’s murder, and gained momentum following juries’ decisions not to indict the police officers who killed Michael Brown and Eric Garner. As an African-American whose parents lived through segregation, and participated in civil disobedience to ensure my access to equal rights under the law, I’m mindful that it’s my turn to fight for the right to live without being racially profiled, targeted, attacked, or discriminated against because of the color of my skin. And while I’m inspired by the profound connection I have with other African Americans organizing for #BlackLivesMatter, I also know that we can’t do it alone. To change politics, culture, and the media, we need white people and other people of color as allies.

I recently asked a close white friend why they hadn’t taken a public stand when I’d heard them privately express concerns about police accountability and racism. I said, “I need you to be an ally.” The response I got was a sincere question: “I want to but it seems so big, and I don’t know where to start. What do you want me to do?”

After taking a deep breath and explaining that racism is so big, and that it feels so big to those of us who have to experience it, I talked them through some guidelines for being an ally. These suggestions apply to almost any situation in which you want to support a cause that does not directly affect you or your identity, and I learned them through my years of being an activist (sometimes the hard way).

Before you can be an ally, you have to own and understand your privilege. There are long histories of homophobia, transphobia, racism, colonialism, sizeism, sexism, ableism, Islamophobia, economic injustice, and other injustices in our society. People are also given unearned advantages or benefits because of identities that are centered and normalized in the dominant culture: That’s privilege. As a woman of color, I experience sexism and racism. I’m also middle class, Christian, cisgender, straight, able-bodied, and an American citizen, all of which come with significant privilege.

A few years ago, a friend tweeted a photo from a shoot she participated in online for a plus-size clothing store owned by a young woman of color. I love fashion, so I jumped into the conversation on social media. After complimenting my friend and the store owner on the amazing shoot, I tweeted that I was sad that I couldn’t wear any of the clothes, and that I wished they came in my size because they were so beautiful. My friend responded by asking me to think about how many options I have for clothes that curvy women don’t have because of sizeism and fatphobia. (A lot.) She asked me to think about a time when I’d been in a store and had someone tell me there was nothing in my size. (I couldn’t think of one.) She also asked me if I had seen women of my size featured in advertisements. (I have, many times.) With each of these questions, I realized she had a point. I had thin privilege. Plus-size women deserve their own space, and I’m not entitled to it. I was embarrassed, but I understood. I’ve had the same conversations and frustrations with white friends when they’ve asked why they can’t participate in activities and groups specifically created for people of color. It’s another inescapable part of being a good ally—you’re going to make mistakes.

Putting yourself out there as an ally isn’t always easy. Being vulnerable is a part of owning your privilege. Expect to be uncomfortable. Be ready and willing to learn, even if it means that you could be called out for not knowing something. If you’re called out and it makes you feel upset or humiliated, know you’re not the first person to feel that, and you won’t be the last. Humans make mistakes. Don’t let an error keep you from supporting the causes you care about. Process your feelings with other allies, journal about what you learned and hope to do differently in the future, and make a pledge to yourself to be a better listener and more thoughtful communicator next time. Prepare to apologize when necessary.

When a person expresses frustration about oppression that you haven’t experienced, it’s time to listen. It is unfair to judge the merits of other people’s experiences when you haven’t walked a lifetime in their shoes. Even if you believe your intentions are good and that you only mean well, derailing conversations or diminishing people’s stories does more to advance oppression than dismantle it. One recent example: The ever-present quip in response to #BlackLivesMatter, “But don’t all lives matter?” The New York Times asked the critical theorist Judith Butler (a white woman) to respond to that very question, and in her response she said that, “One reason the chant ‘Black lives matter’ is so important is that it states the obvious, but the obvious has not yet been historically realized.” Unlike asking, “But don’t all lives matter?” her answer drew attention to the issue at hand without undermining it.

1 2
Next →
activism allies cause politics