I admit it: I became a fan because of a crush. 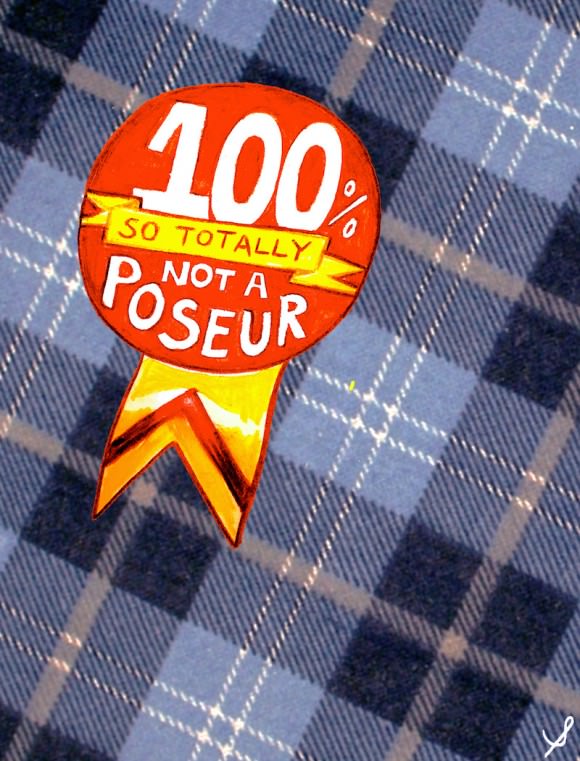 I’m always mortified when people ask me how Nirvana came to be my favorite band. Since I started listening to them 12 years ago, at the ripe age of 10, I’ve gotten numerous T-shirts, the band’s smiley face logo as a tattoo, and a bad case of word vomit any time they’ve come up in conversation. “Nirvana Fan” is a part of my personality, something people know about me no matter how long they’ve been in my life. I wear my love for the band on my arm, very literally, but that doesn’t mean I’m any less ashamed that I got into the band’s music in the first place because of a crush.

I still remember lying to the boy, let’s call him Frankie, when a small group of classmates with faces I can’t remember were discussing their favorite bands. It almost always boiled down to hard rock and metal for the dudes in my class, which were also genres I was starting to favor. I’d liked Frankie since the start of fifth grade—he seemed so grown up, talking about movies and bands I didn’t know about and making dirty jokes—and he spoke passionately about how cool Kurt Cobain was and how much he loved Nirvana. Turning his mischievous smile and scary-bright, ice-blue eyes my way, he asked me if I liked them, too. Without thinking, I said they were my favorite.

At that point, I had never even heard a single Nirvana song, at least not consciously. I had been slowly drifting away from ’N Sync, Britney Spears, Mandy Moore, and the general pop zone toward rock bands like Good Charlotte, Linkin Park, and System of a Down. But I had no clue who Kurt Cobain was—and definitely not that he was dead! All I knew was that the boy I liked suddenly believed that we had something in common, something we could talk about, just the two of us. It felt good and adult to have a topic of “mutual” interest to flirt about, even though I wasn’t (and am still never) 100 percent sure talking about a band was flirting.

It became a habit that I leaned on all the way through high school: saying, “Yes, Cute Boy, I absolutely love this band I have never heard of!” It helped that I was becoming a more voracious lover of music, so my knowledge of music history past and present was growing at a rapid pace, parallel to the ever-expanding roster of music nerds I had crushes on. I was becoming more fluent in the internet, where I researched countless cool bands, and devoured music magazines and anthologies. As I got older, it became harder to pass off general knowledge as expertise because the score-keeping dudes I tended to fall in love with would press me to authenticate my claims. “Well, then what’s your favorite song by them?” they would judgmentally ask as I racked my brain for any semblance of knowledge I’d gleaned from reading Rolling Stone and SPIN. But at 10, Frankie didn’t care how deep my love for Nirvana was—he was simply stoked to hear me say they were my favorite band. His eyes remained bright as he responded, “Nice!”

My Nirvana education began soon thereafter. On my dial-up Barbie computer, I scoured the internet for any clips of songs or videos I could find. These were pre-YouTube days, and “Smells Like Teen Spirit” was the first and only search-result I got. While listening to the song’s clean but abrasive riff and Kurt Cobain’s rasp, I forgot about Frankie or that Nirvana was in any way related to him. It was electrifying to be pulled from the grips of a crush and placed directly into the hands of musical bliss.

It took some time for me to actually start collecting Nirvana’s music. I actually paid for individual songs on iTunes and treated visits to record stores the same way my mom treats grocery-store trips: I had to have a list and a purpose. I was given my first mp3 player, a blue iPod mini, in sixth grade, and I used my copious gift cards to buy single Nirvana songs (always the ones rated “Most Relevant” in the iTunes store). I remember putting the With the Lights Out box set on my Christmas list in seventh grade, with the inklings of Frankie’s potential love for me pushing my pen to spell out Nirvana’s name on the paper. The hope came with the aftertaste of shame: Why do I even want him to like me because of my taste in music? That boxed set, which was under the tree that Christmas morning, fully captivated me with its CDs of rough demos and DVDs of candid and intimate video footage. Without even realizing it, I’d hit my stride as a full-fledged Nirvana fan.

My crush on Frankie steadily grew, then faded away, as he was replaced by other boys. But the thought lingered that maybe Nirvana was something he and I could talk about at lunch or recess, or when we were goofing off during Spanish or Social Studies. Our conversations became analytical, as we dissected the music and Kurt Cobain’s life. We argued about Courtney Love and involved our friends in huge discussions about how awesome Nirvana or the Red Hot Chili Peppers or whatever band we liked at the moment was. I’d gotten to know Frankie even better, and my crush for him morphed into a genuine friendship (with some lingering attraction). We actually did have a lot in common, even outside what I’d very deliberately gained in order to impress him.

Loving the same things is an important part of a relationship, for sure, but being obsessed with the same bands (or movies, TV shows, books, sports teams, dog breeds, et cetera) isn’t everything, nor is it something you can or should force. Because I loved music, I placed (and still place) heavy importance on being able to share that enthusiasm with whatever dude(s) I liked. Could I talk about ’90s alt rock with them? Would they want to pick apart hip-hop samples with me? But there came a point where I understood that love built on a shared preference often stems from loving the idea of a person. Because of Frankie’s taste, he seemed older to me, even though we were the same age, and I wanted to experience the maturity I had projected on him. (Also, he was cute.) If he was returning crush feelings because I said Nirvana was my favorite band—that wasn’t really me either. Not yet.

Nirvana was neither the first nor the last musical preference I’ve taken on for the sake of a crush. I can name countless genres (pop punk, rap metal, prog rock) and artists (Rammstein, Beck, Red Hot Chili Peppers) that I’ve picked up because a boy I liked was into them. I thought that being eerily similar to the person I was crushed out on would make me irrevocably visible to him. If I liked what he liked, then I would be another thing he liked. So many of these malleable parts of me have washed away with time, as my self-confidence has grown and I’ve learned that my music taste is cool without having to shapeshift it for some dude.

Frankie gradually disappeared from my life as we went to different high schools in different states. Other boys have come and gone, too, but the effect Nirvana has on my brain and heart—of making everything else fall away when I hear their music—has stuck with me. Their music is constantly pulsing beneath my life’s major plot points. I know now that there is no way, in reality, that I am a Nirvana Fan Because of Frankie. No one else can take credit for the ways I let that band into my life or how Kurt Cobain’s lyrics have remained important to me for so long. Now, I’m a Nirvana Fan Because of Me. ♦