I dealt with mortality at the ripe age of 13. 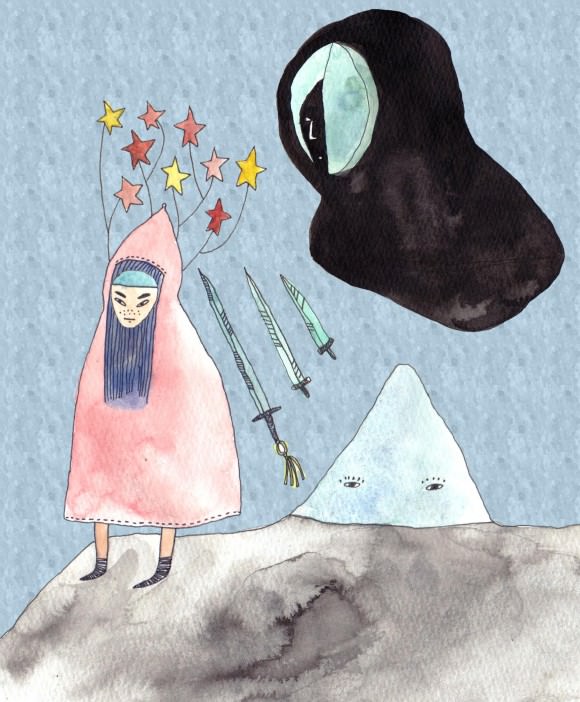 It was around 10 PM when I got home from gymnastics practice and my dad sat me down at the kitchen table. This was odd in and of itself: He usually left dinner out for me and was in bed by then, but that night he waited up. He told me he got my blood test results back from the doctor. I had tested positive for Wegener’s granulomatosis, an uncommon and incurable disorder that causes inflammation in the blood vessels, and that sometimes leads to organ failure. I asked him what that meant. Specifically, I wanted to know if I was going to die. I already kind of knew the answer. He said that I might, and that was that: No other questions.

You’d think a 13-year-old would have a goddamn conniption after learning that kind of information, but I didn’t feel afraid. What I felt was massive gratitude toward the universe. The disease was a mouthful and would be a bitch to handle—meds, MRIs, a CT scan, and getting blood drawn every two weeks—but I was alive. Before that moment, I was scared of the possibility of dying from an unknown problem. Learning that I had Wegener’s granulomatosis, which could ACTUALLY KILL ME, was mostly a relief. Coming face-to-face with death gave me a bit of a shock, for sure, but more than anything it made me start thinking about my time on earth, and what I wanted to leave behind. But this isn’t an inspiring story about a girl who realized her days were numbered, and then set out to do everything she’d ever dreamed. I didn’t go all Upworthy on the world. This ain’t no clickbait!! This is about confronting my own mortality, and at a younger age than I’d ever expected. This Girl Faced Death at Thirteen. You Won’t BELIEVE What Happened Next.

Though ol’ Wegener could (and still can) spread to my vital organs, he seemed to be taking up happy residence mostly in my eye: 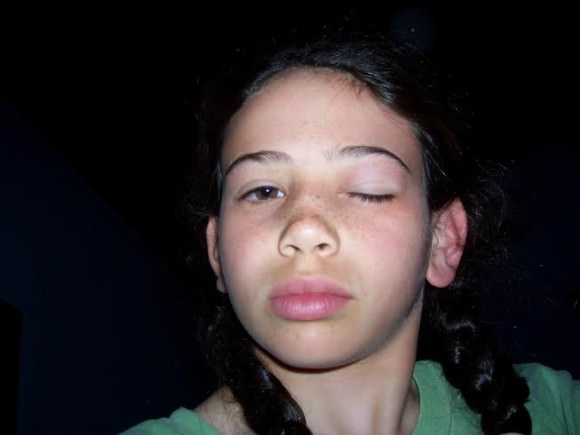 About a year and a half before the conversation with my dad happened, my left eyelid, which had been slightly swollen for a couple weeks, ballooned up like a bug’s eye the day of my gymnastics team’s state championships. Within hours, it had swollen shut and turned a nasty redish purple. I went to school with sunglasses on to hide the bulging mass on my face, but SOME teachers (whom I will NEVER FORGIVE—Ms. P., you know what you did!) made me take them off. The other kids in my class, including my friends, asked me things like “What’s wrong with you?,” or, “Why does your eye look like that?” I hated those conversations because I had no answers. All I could say was, “I don’t know.” It was mortifying: I was in the seventh grade. I was busy trying NOT to be noticed!

So after the diagnosis, it wasn’t like I was going to jump up on a desk, throw my sunglasses across the room, and yell, “HEY, GUYS! I HAVE WEGENER’S GRANULOMATOSIS, AND I’M MAYBE GONNA DIE FROM IT!” I didn’t say anything to anyone. I retreated from my friends and became very solitary. No one called me on it, and I don’t know why, but maybe it was because I had been drifting away for a while, with nonstop medical problems preoccupying my time and energy. The way I saw it, and still see it, is that we enter and leave this world alone, and there are times when no one can help you but yourself. My mom and dad were constantly worried, and so was my older brother, but I didn’t know the extent of it until later. I didn’t reach out to them, and they gave me my space. No one could console me about my possible death—mostly because I didn’t need consoling.

I set out to be the best I could be in whatever I was doing. And I wanted to do everything. Gymnastics was my life, but I started acting in school musicals, writing my own plays, and basically trying everything. I was going through the classic crisis of, “Who am I,” and, “Who do I want to be?,” but I took the time to figure it out. There was no one I was actively trying to impress—I was busy trying to outrun death, my only competitor. I could do my own thing and figure myself the hell out!

I took a photography class because it was something I’d always wanted to learn, and I quickly became obsessed with it. Documenting my life through photos made me feel present and immortalized. My images took on their own life. I organized photo shoots with my cousin Margalit, discovered Flickr, and began to really hone in on what I loved. I was photographing everything in my world and doing gymnastics four nights a week. I was on Sandy time!

Relationships with other people are necessary and beautiful, but I suddenly couldn’t relate to other people unless I knew to whom they were speaking. I was my own companion—no one else knew what I was going through. My friends noticed I would miss weeks of school at a time, and they all whispered about my hospitalization (I learned later that my brother had told some of my friends about it in the hopes that they would come visit me), but I never confided in any of them. Why should I live with them if I wasn’t going to die with them? If my years were limited, I wasn’t going to spend them at parties with people I didn’t like.

It’s been almost 10 years since I found out I have Wegener’s granulomatosis, and I don’t actively worry about death. I have to go to the doctor more than most people, and I get blood drawn every six weeks. There’s still that sense of urgency, which I’d categorize as ambition—though others might call it obsession. It might seem unhealthy, the degree to which I obsess over both photography and comedy, which in recent years has replaced gymnastics. I look at it as research into finding my voice and vision.

I am a full-time photographer, something that I probably wouldn’t have accomplished by the age of 22 without my sidekick Wegener and his pal granulomatosis. And I don’t make friends with people unless I really want to. I may come off as cold, but ultimately I want to make the most of my life. I’m not going to waste time with formalities. I’m on Sandy time! And I’m lovin’ it! (That’s my new catch phrase: I’m lovin’ it. Wait—that’s McDonalds’.) No one can tell me what my life is about. I’m gonna do that myself. ♦