Plus new Charli XCX, Beetlejuice news, and geopolitical updates from all over. 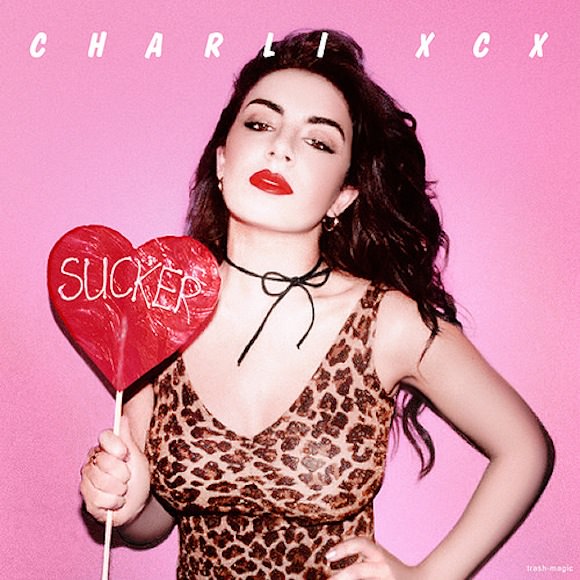 Charli XCX’s new album, SUCKER, came out this week, and gave me both things I ask of music: songs to actually identify with, and songs to transport me into the TEEN MOVIE OF MY DREAMS. On the former end of the spectrum: “Doing It” is about how gr8 sex is; “Body of My Own” is about how often masturbation is even gr8-er than sex. On the latter end of the spectrum: “Die Tonight” is a perfect soundtrack for stargazing with friends; “Break the Rules”=ditching class; “Famous” = practicing substance abuse while matching your expression to that of the sunglasses emoji; “Need Ur Luv” = marching aggressively over to your crush’s house.

That last one—also the last track on the album—is my favorite, and maybe my favorite song of this year? The lyrics are eerie-veering-on-pitiful even when the sound is cheery and as a result it is extremely addictive, perfectly capturing the sentiment of the song. I have listened to it one million times already, and have not been able to keep myself from dancing for any of them, puffy coats on the subway be damned. Here’s Charli performing it on Letterman with Rostam from Vampire Weekend, the song’s co-writer and producer:

“Boom Clap” is as dreamy as ever, but it’s so nice to hear such a ubiquitous song at home in the larger world of the rest of the album, which is mostly about having fun and loving yourself. COOL W/ ME.
Stephanie 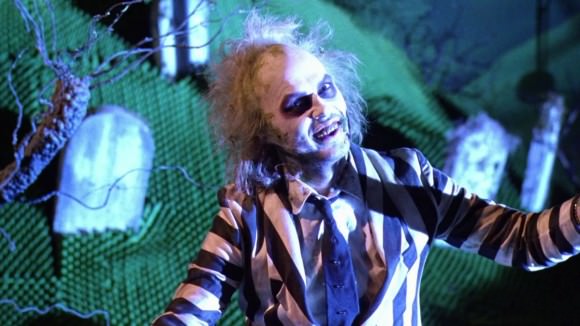 Beetlejuice was one of my very favorite childhood movies. Like, there were summers when I watched it practically every day. I owe my sense of style to Winona Ryder’s character Lydia Deetz—I used to do my bangs like this and everything. So I actually SCREAMED in delight when I saw articles confirming that Tim Burton is in to direct Beetlejuice 2 in my social media stream. I let out another little chirp of delight when I read that Burton said Ryder would be returning for the sequel (OMG. How? As a ghost? A goth mom? I want to know!). And then I burst out laughing when I watched the actual interview with Burton and saw that his responses to questions about Beetlejuice were so positive, like, “Oh yeah yeah yeah yeah. Oh yeah, oh yeah.” I feel the same way!
Chanel 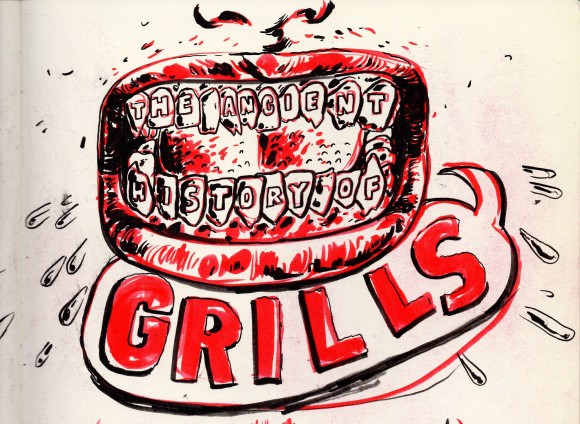 Illustration by Nick Gazin via Vice.

VICE published a thorough piece on the history of grills—as in, the precious-metal mouthpieces you hear about in, say, Nelly’s hit song “Grillz.” VICE goes deep into grills throughout the ages, beginning with wealthy Etruscan women at least as early as 200 B.C. If you’re a history buff, you’re going to love this. 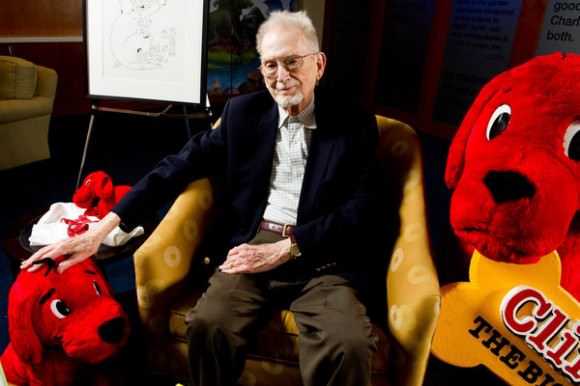 The author and illustrator Norman Bridwell passed away last Friday at the age of 86. While his name might not trigger your memory, his creation, Clifford the Big Red Dog, probably will. The first book about Clifford was published in 1963, and Bridwell penned many other stories about one of my favorite fictional canines. The books inspired a television show and a full-length film, so I’m sure there are many Clifford fans who are mourning the loss of a man who helped shape their childhood.

Here’s some important boy band news that isn’t about One Direction: A documentary about the Backstreet Boys, called Show ‘Em What You’re Made Of is coming out January 30! The documentary follows how BSB’s fame impacted their personal lives then and now. Cry over the trailer and then squeal to your heart’s content because BACKSTREET’S BACK, ALRIGHT!
Meredith

This week, President Barack Obama ordered the restoration of full diplomatic relations with Cuba for the first time since 1961. President Obama and Cuban President Raúl Castro have negotiated for the release of prisoners, and certain restrictions on trade and banking have been lifted. For some Cubans, this is revolutionary news, enabling them to hope for more access to resources and a better future. Critics of the new policies are more skeptical, and feel the negotiations are simply rewarding a repressive regime. The New York Times has reported that overall, people in Cuba are rejoicing over the decision, but the lasting impact won’t be seen for a very, very long time. 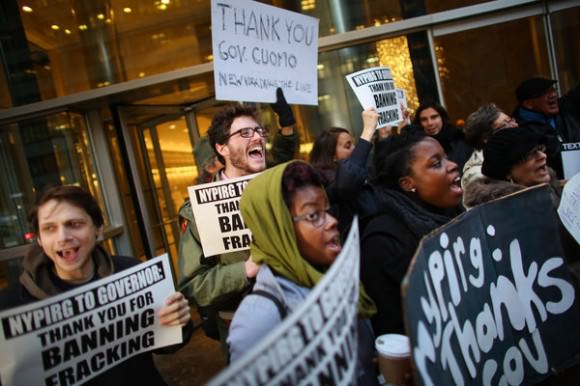 After years of heated debate and what has felt like the constant, overbearing presence of corporate interest (at least for those of us who lived far upstate), New York has finally decided to ban fracking. For the uninitiated, fracking is a natural gas extraction practice where water, sand, and chemicals are shot underground under high pressure, causing cracks that allow natural gas to flow up more freely from way deep down. In addition to being environmentally unsound, it’s terrifying—it can result in flammable gas pouring out with your tap water. 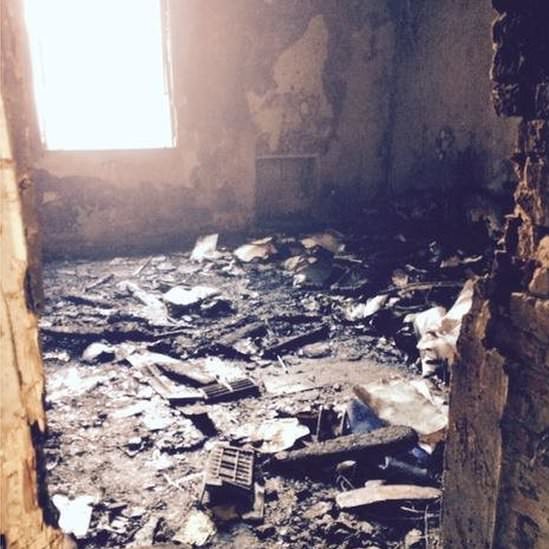 This week, Taliban gunmen invaded the Army Public School and Degree College in Peshawar, Pakistan, killing at least 148 people, almost all of whom were children. One teacher, Afsha Ahmed, is being lauded as a hero because tried to shield her students from the gunmen, and was subsequently set on fire. The Taliban claim that the attack in Peshawar was an act of revenge against the Pakistani army’s own targeting of its families. Some think it was a way for the Taliban to prove it is still operating despite Operation Zarb-e-Azb, a comprehensive military offensive designed to get militants out of North Waziristan, Pakistan. 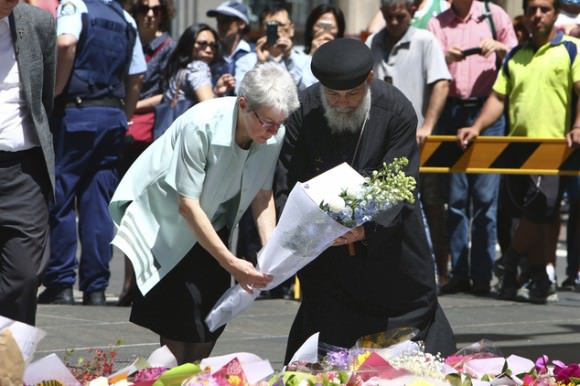 This week, a gunman named Man Haron Monis held 17 hostages in a café in Sydney, Australia. When the siege ended, two hostages and the gunman himself were killed. Monis had a known history of violent crime. During the standoff, Monis demanded an ISIS flag and a phone call with Australian prime minister, Tony Abbott. A total of five hostages managed to escape over the course of the standoff. Eventually, police threw flash grenades into the café before storming it from both sides, and killing Monis. Alarmingly, because of Monis’s actions, some Muslims in Sydney were afraid of a violent backlash. People banded together immediately on social media after a Sydney woman called Tessa Kum created the #Illridewithyou hashtag; people using it would post an identifying feature or meeting point, and accompany Muslims who wore religious garb to their destination on public transport, to prevent confrontations on public transportation. The hashtag quickly trended worldwide and was mentioned over 150,000 times just days after the shooting.
Meagan

Oh, God, I have spent the better part of this week flailing on the ground about this video. Two political-pundut brothers were arguing on C-SPAN when THEIR MOM CALLED IN TO THE SHOW to give them a stern talking-to! The looks of realization on the faces these two grown men as they realize that their own mother is the caller on live TV are priceless. PRICELESS. And she proceeds to let them know that she disapproves of their bickering on television during the holidays. Just goes to show that no matter how old you are, your mom still has the power to mortify the heck out of you when you’re acting out of line! 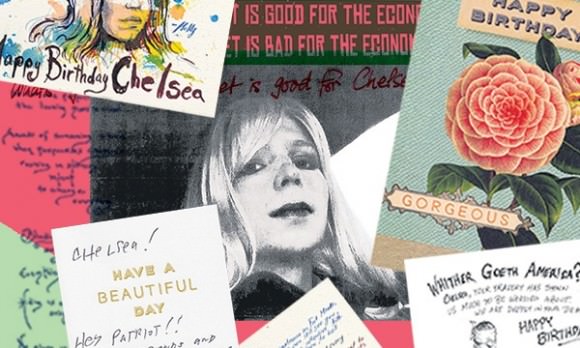 Image via The Guardian.

This week, Chelsea Manning turned 27 in prison while serving a 35-year sentence for espionage charges. Several celebrities, writers, and thinkers, like Vivienne Westwood and Saul Williams, sent her birthday greetings, which were published by the Guardian. Alan Moore, one of my favorite authors, sent her a beautifully written piece of prose that tells her that “the world’s still here, that it still has its good, clear days, and that those days are better and are clearer thanks to you and what you’ve done.” It is because of Chelsea Manning that we have more insight into the actions of the American government, and through her bravery, we learned information that we never would have had otherwise. Here’s hoping that President Obama gifts her with a presidential pardon before he leaves office.
Tayler 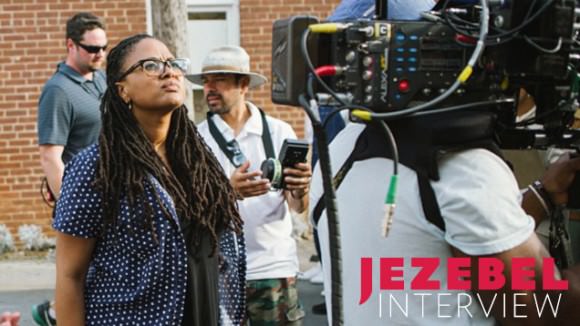 It was announced last week that Ava DuVernay will be the first black woman ever nominated in the Best Director category at the upcoming Golden Globes—a huge, overdue honor. The nomination is for Selma, Ava’s third film. I’m overjoyed at Ava’s nomination! In this Jezebel interview, she discusses being a black and marginalized woman in the film industry and acknowledges other black women film directors. My favorite part of the interview regards the set design in her sophomore film, Middle of Nowhere, where she talks about the importance of set design in showing the interior spaces of a character.
Estelle 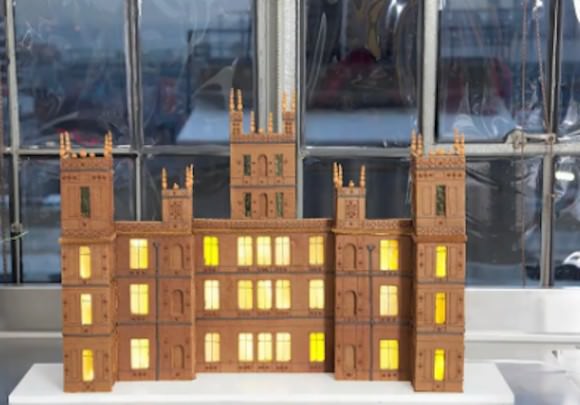 If your preferred holiday activity is to create edible versions of fictional homes, then Martha Stewart has come to your aid! Take a look at Martha’s step-by-step guide to creating Downton Abbey out of gingerbread. Gingerbread Abbey! It looks delicious, architectural, and festive.

On Sunday, one of the very few northern white rhinoceroses left in the world died at the San Diego Zoo. There are now only five of the species remaining, and the tiny number means that the rhinos’ likelihood of naturally reproducing is very low—the species’ only hope now is artificial reproduction. This is such very sad news. 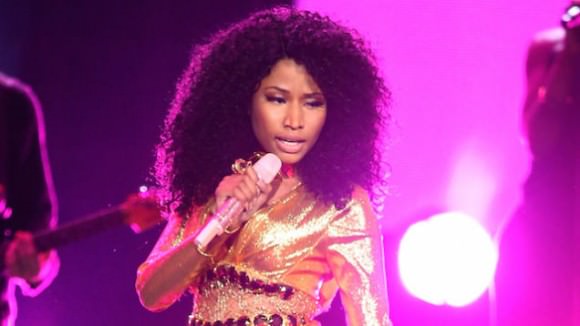 Pllssshhhhhhhh…that’s the sound of my heart melting because I’ve listened to Nicki Minaj’s new album The Pinkprint too many times. The record features such perfect collaborators as Beyoncé, Ariana Grande, Jessie Ware, and Drake, and there are so many amazing demonstrations of Nicki’s sharp flow that I can’t pick a favorite track. The reason my heart is all in a puddle, though, is The Pinkprint’s breakup ballads, and Nicki’s meditations about her relationship with her family and the death of her cousin on “All Things Go” is hugely emotional, too. Rookie’s Julianne wrote a great review of The Pinkprint. 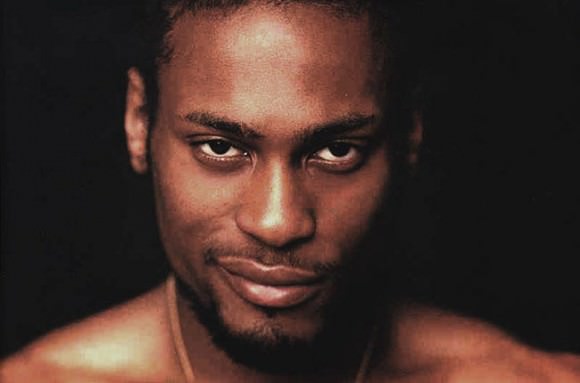 Since he hasn’t released an album since 2000, it was an extra-special surprise for fans when D’Angelo and the Vanguard dropped Black Messiah on Sunday, seemingly out of the blue. Check out Billboard’s list of their top 10 lyrics from the album, including a fierce line from “1000 Deaths,” a haunting song about bravery. ♦