The ways we keep track of the important business of our LIVES.

This month’s theme, First Person, has been all about owning your experiences, and specifically by documenting them. We’ve talked about the radical power of the selfie, and making a photo diary because it will matter to YOU. There’s keeping a plain ol’ diary, too, but there are other ways that we remind ourselves, on the daily, that what happens in our lives is important. We’ll tell you about some of our favorites. 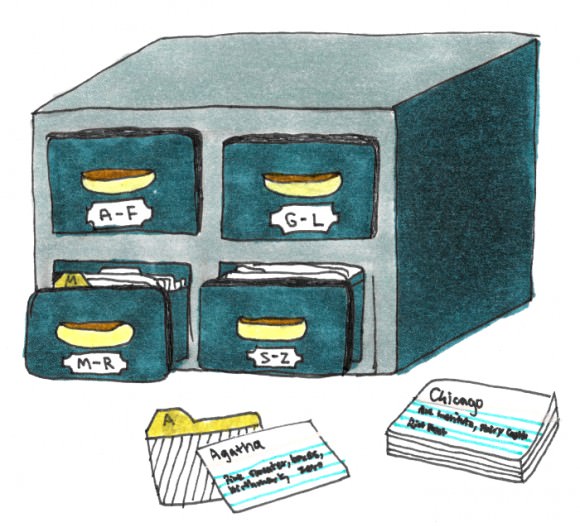 All illustrations by Leanna.

When Hazel reported that my house was “like a living diary,” she was not kidding: I keep…everything. As I’ve found out, more than other people. Not everyone has a literal filing cabinet of index cards describing perfect, crystallized moments they’ve encountered, dated and geographically located. My filing cabinet is where I keep the scenes that are really important and vivid, and that I never want to forget.

I love this system because it functions like the infinitely dividable and malleable memory that lives in my brain: I can add cards between two points, or rip up a card, or rewrite one when I remember a detail. But I have a system for everything. The flat contents of my life—notes, cards, tickets, wristbands from concerts—get scrapbooked into a big blank sketchbook, with thick pages. Small objects go in the dozen wunderkammers I have hung up around my house. There are other things I do that I didn’t even realize were documenting, archiving, or trying to keep parts and people in my life just in case I need that comfort. During parties, for example, I coerce my friends into standing against a doorframe so I can draw them into my height chart. —Lola 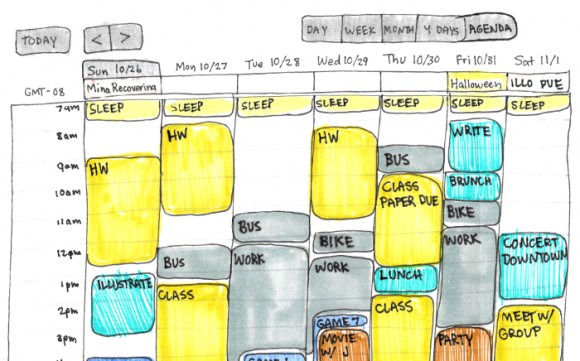 I have an archive of written diaries, but now that I’m not bored in class with a notebook in front of me eight hours a day trying to think (and write) about ANYTHING other than what I’m being taught, it’s hard for me to keep an intentional running narrative. Now, my day-to-day lives in my Google Calendar.

I write in everything I did that day and use the iPhone app Moves, which tracks where I go automatically, to push my comings and goings onto the grid. —Lola 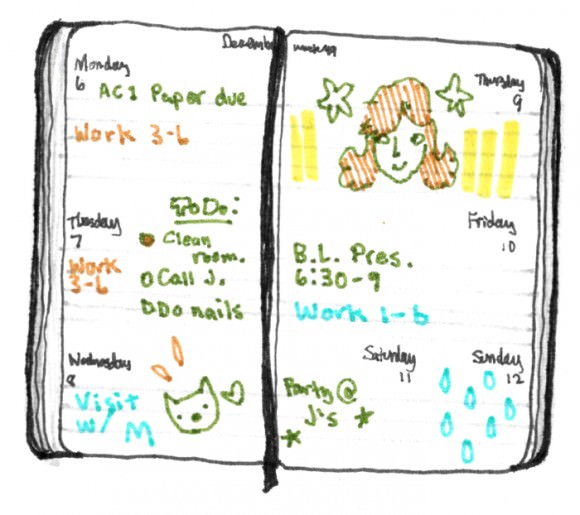 I’ve always been a big fan of planners—using them not only to track appointments, but also to create lists of tasks and books I want to read, and to jot down general thoughts. For years I used Llewellyn’s Witches’ Datebook because it had the phases of the moon and spells and other Wiccan information—I still recommend it to anyone interested in Wicca—but I outgrew it. The whole week was on a two-day spread, and there was just a little rectangle to write in each day. That’s when I found Moleskine’s daily planner. It provides some serious planner action, allowing plenty of room for lists and notes each day (even spots where I can record the weather, if I’m so inclined). There is a section for notes, an address book, and a pocket so I can stuff things I collect and/or want to keep with me in there (I use it to store my list of goals for the year). The only downside is the book is basically a slim hardcover—like an old Nancy Drew mystery—so I rarely carry it in my purse, only in my backpack. This year I am going to downsize to the pocket-sized version so I can take it with me everywhere—even though I may have to write a little smaller! There are lots of color options, too (violet has been serving me well). —Stephanie 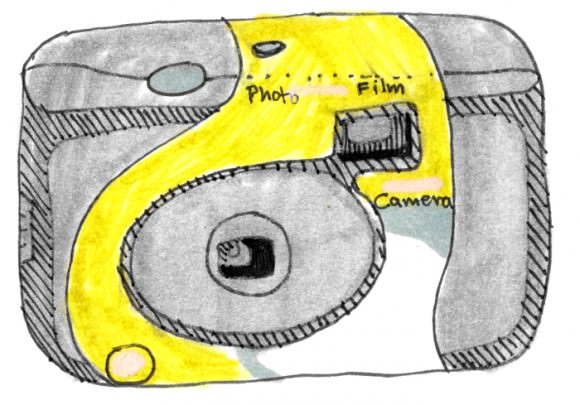 I felt so hard for Hazel’s article about how difficult it’s been for her to keep a diary. I used to buy new notebooks compulsively, write two entries, then give up because I couldn’t fathom the idea that someone might read them and find out how truly boring and superficial I am. When my band started touring, I knew I had to find a way to capture our misadventures and help me remember them forever, in a format I’d actually want to keep up with. Enter disposable cameras! They’re cheap, especially if you buy them in bulk, small enough to carry in your pocket, and give you funny, unpredictable results that feel a little more exciting than a photo taken on a phone. There’s something magic about film, after all, but like all good magic, no matter how real it looks at first, there are always tricks and sleights of hand involved—disposable cameras are so easy to hack for super weird, artistic results. I keep one in my bag at all times. When I develop it, I’m always surprised by what I chose to shoot at any given moment, and it helps me remember things I never would otherwise! —Meredith 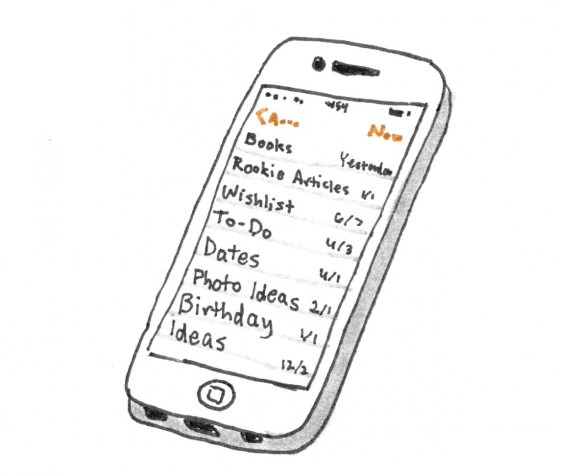 While I like having a notebook around, it’s my phone that I rely on to write down story/screenwriting/creative ideas that come to my head. I type paragraphs and paragraphs—then once I remember they’re on my phone, I transfer them to my computer/notebook and delete the note. —Chanel 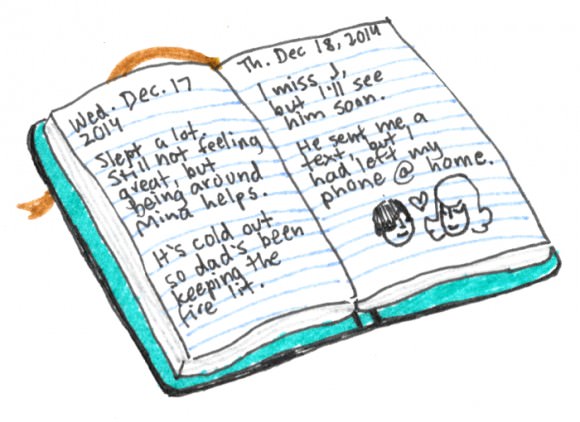 I’ve tried to keep up daily diaries before and have always forgotten about them. I recently started using One Line a Day: A Five Year Memory Book. It’s so not intimidating! I keep it in a very visible place (by my computer) and just jot down a line or two a day. If I forget for a few days, I go back and fill them in. It’s not just a planner—I try to write about what I did and what I felt. I can’t wait to have more years filled in, so I can compare my life from year to year. I’ve already gained some perspective: The things I was worrying about on September 28, 2014 probably won’t matter on September 28, 2015. —Kelly 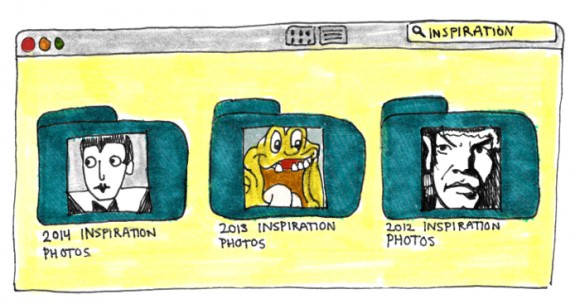 I use a few different methods to document MY LIFE EXPERIENCE. When I traveled to Iceland earlier this year I put everything I did/saw/ate that day in my Google Calendar. I also write things down in a customized planner, but my favorite option has to be the inspiration folders I keep on my computer and later upload to Flickr. I screencap any important Gchats, texts, tweets, etc. and keep them in there. I also store some of my important personal photos, as well as images I grab online that inspire me and remind me of certain times. I started doing this in 2009, and I will go through the folders every few months. This illustration is of 2010’s folder, which was a gem. Isn’t it most inspiring thing you’ve ever seen? —Marie 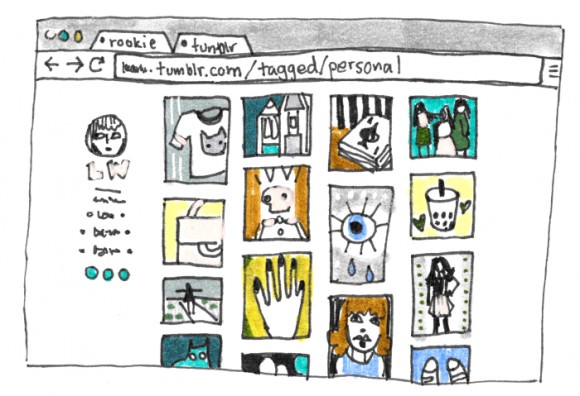 I am an avid screenshotter, especially when it comes to Instagram and Pinterest. It’s quicker than downloading images, and I get a lot of visual ideas from capturing little snapshots of things that inspire me. But it’s not just pictures—sometimes I’ll screenshot tweets and important quotes so I can have them on me (or remember them) all of the time. —Chanel 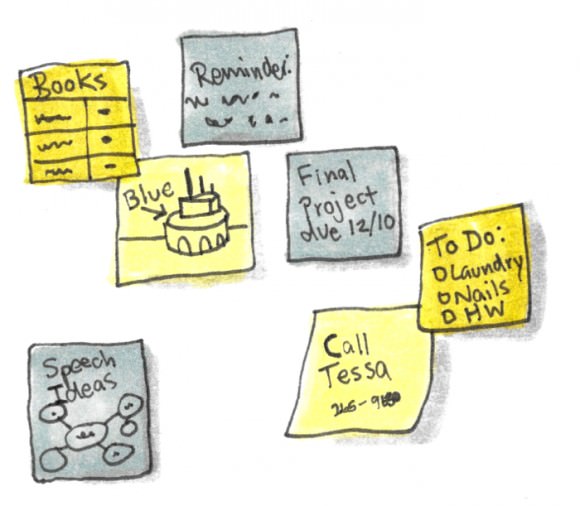 Keeping small notebooks is the way I store all the quotes, songs lyrics, and profound bits of advice my best friend gives me during our midnight phone conversations. However, with university life came an an increased workload and less time to dig up and page through my books. My new favorite method is Post-It notes. I’ve stuck up my tried-and-true affirmations and movie lines, (“RUMBLE, YOUNG WOMAN, RUMBLE!”) on the wall opposite my bed near my wall calendars, and some on my closet. It helps to have them in places where I can look up to them when I’m feeling challenged and, sometimes, inadequate. —Nova 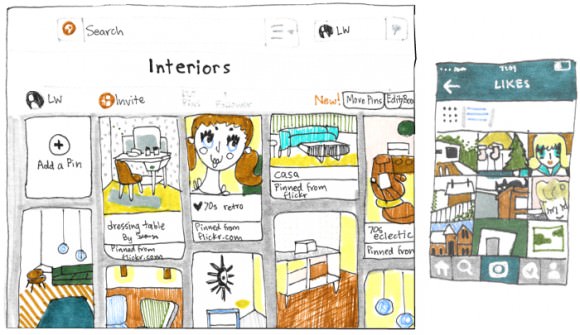 I know Instagram is supposed to be the place where you document your life in pictures, and I definitely use it for that purpose. But for the past year and a half or so, I’ve been doing a lot of hikes, and there have been more than one or two photos that I’ve wanted to share of each. I was itching for a more in-depth way to show and describe where I went, what I saw, and how I felt about it. Tumblr has been perfect for this because it’s easy to use on my phone while I’m heading back home from nature. My Tumblr is public, but I don’t have many followers. Though it feeds to my Twitter and Facebook accounts, I don’t get many comments. But I don’t really care. If it starts a conversation, cool, but I use Tumblr for me—so I can go back and relive my adventures and refer to them when I’m planning new ones. — Stephanie ♦