My scars are with me for life—and that’s totally OK. 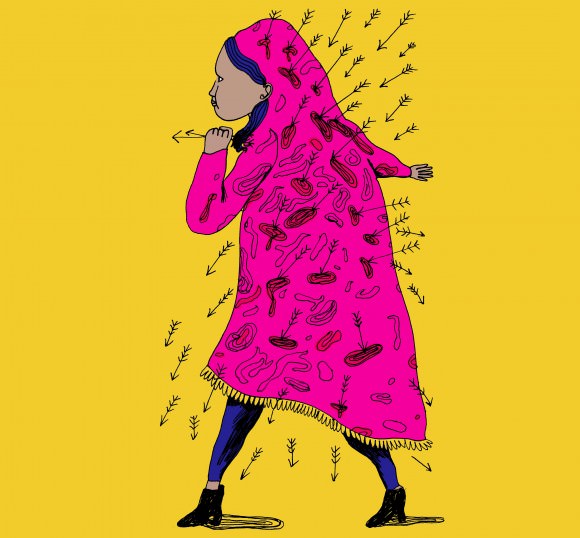 The day I started harming myself at age 13 was an unremarkable Monday, just like any other that March. There was no trauma, no trigger, no perceived reason to hurt myself, except for the self-loathing that had always been right below the surface of my daily comings and goings. I couldn’t focus on my homework because I couldn’t get it right—I couldn’t get anything right—and my frustrations grew into anxiety, which escalated to quiet panic, then desperation about being a fuck-up, and fear that I would never escape the worst parts of myself, that I was doomed, and that I would never not be doomed unless I did something to get the feelings out. So I did. I didn’t even know I had made a mark until the next morning, when I was getting dressed. There it was, on my left forearm: a visual souvenir of my sadness.

It was easy to hide under a sweater, but I couldn’t leave it alone. I kept thumbing at it under the sleeve of my maroon cardigan—on the bus ride to school, sitting in the back of French class, quietly eating my lunch. I prodded it the way I would have absentmindedly picked at a scab on my knee. (Picking at scabs was a habit of mine that drove my mother up the wall. “If you don’t cut that out,” Mom would say, “You’ll be left with scars that will stick with you forever.”) That first cut faded within a few days; it wasn’t very deep to begin with. But I had already added more and was slowly becoming obsessed. The cuts were getting deeper. It was like having a secret against the world.

Cutting and burning are often dismissed as “cries for help,” and in my case, that wasn’t totally inaccurate. I wanted somebody to notice my sadness, to pay attention, to put into words what I couldn’t vocalize, and to take care of me. But as the months got warmer and clothing became scarcer and my marks continued to multiply on my arms, calves, thighs, and stomach, I became freaked out by the possibility that people might notice them in reality. I would dance with the idea of telling people, but would then immediately panic and retreat back into myself any time it was a possibility.

Alone in my bedroom, cutting made me feel powerful and in charge of myself, but that feeling would slowly erode when I was around other people. It was 2004, and Myspace was just becoming a Thing. With it came the rise of a mall-goth subculture that became the butt of several jokes. An example of this kind of hilarity, which I read on someone’s profile back then: “I wish my lawn was emo so it would cut itself.” I’d come to hate how pathetic and melodramatic cutting made me feel. I was more scared of becoming a punchline than I was of being seen as “crazy.” To be laughed at, whether by classmates, friends, family members, or strangers on the internet, would have been the worst consequence. I was ashamed of how anxious I was over “nothing” when there were people with “real” problems in the world. Those stupid scars were a permanent record of my lowest moments. Letting other people see—especially friends, teachers, my parents; in other words, anybody who might have been in a position to help or make me stop—did not seem like an option.

Hiding my marks became something I worked my days around. I constantly found new ways to lie, which I was good at because my parents didn’t suspect anything was up—as far as they knew, I didn’t have anything to lie about. I skipped out on a whitewater rafting field trip in favor of sitting at home in a sweatshirt. I turned down invitations to anything that might have involved wearing a bathing suit (it’s remarkable how many times you can use the “Sorry, I’m on my period” excuse over the course of one summer month when you’re a teen girl). When I started high school that fall, I would let the visibility of my cuts (which ebbed and flowed in number, depending on how hard a time I was having) dictate whether I would get changed for gym in the locker room with everyone else, or if I would be the lone girl getting dressed in the bathroom stall.

“Getting better,” as in, learning not to cut myself, has been a process a decade in the making. I took baby steps, mostly starting while I was in university: The summer I was 19, I mentioned to my parents that “I get anxious sometimes” and made an appointment with a school counselor. I told a doctor, in the most ambiguous terms possible, that “sometimes I maybe think about, I don’t know, hurting myself, is that a thing?”

I backslid a lot; there was an incident when I had to go to the emergency room, and more doctors’ visits and prescription medication followed. I like the idea of a narrative in which this one time I was depressed, and then I saw a doctor, and then I got “cured,” and now I have my shit figured out and am ready to deal with the next curveball life throws at me with aplomb worthy of Wonder Woman and other fictional superheroes, but you’re too smart to fall for that. There are still bad days. The most complicated things to reconcile with myself are (and this is hard to admit) the ways in which Being Depressed just doesn’t fit in with the public persona I’ve been building for myself. I volunteer to mentor kids. I review children’s books. I write jokes for online magazines (like the one you’re reading now, and this one). I want to make people laugh. I like to pretend that I don’t take myself seriously, that there are no parts of myself at which I can’t bring myself to poke some fun. And yet, my body is flecked with reminders of my mental illness, and they pop up when I might not want to think of them, let alone make light of them.