A song premiere and interview with the songwriter/producer.

How to Write About Real People 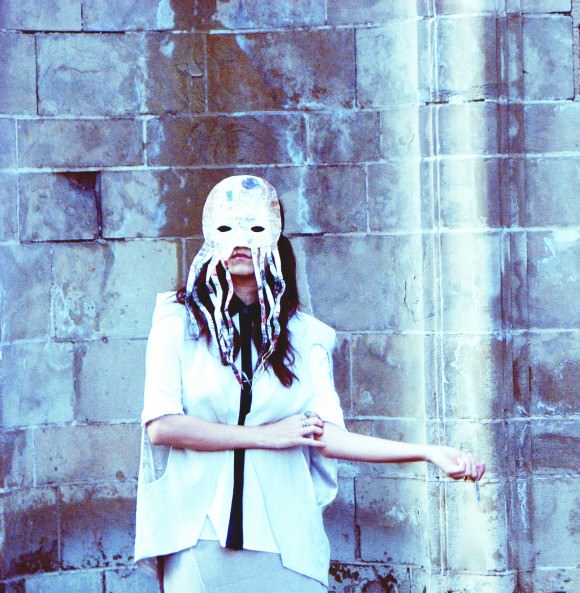 Photo by Will Love.

Mahsa Zargaran, aka Omniflux, is a Los Angeles–based songwriter who explores the intersection of the familiar and the alien through sweeping, cinematic electronic music. Outside of her personal project, Mahsa also helms the drums for the band Sabrosa Purr.

Born in Tehran, Iran, Mahsa moved to the United States as a high schooler and got into music after becoming acquainted with the instrumental compositions of Hans Zimmer and Clint Mansell. As Omniflux, Mahsa contorts her voice and utilizes brilliant arrangements to create something stunning and provocative…like the song “Lawless Flawless,” which Rookie is excited to premiere today!

I talked to Mahsa about PJ Harvey, growing up, and advice for hopeful musicians in the making. (You can find more Omniflux on Twitter, Facebook, and Instagram).

PAULA MEJIA: Where did you grow up?

MAHSA ZARGAREN: I grew up in Iran, in Tehran. We skiied in our streets. It was really charming. Perfect summers and falls. I have nothing but wonderful memories.

I went to an all-girls’ school—that was a unique experience within itself. I didn’t have the option of going to co-ed school [in Tehran]. When I moved to the U.S. in high school, I found it interesting that everyone hung out with specific groups of people. It was like what you see in movies—the goths hang out, the nerds hang together. In Iran, I felt like everyone was just in a big group. There wasn’t that divide. Everyone was in it together—it was us against the teachers, so we were all very unified. I never saw anyone get bullied. It was a really warm, supportive, empowering environment to grow up in.

Family is a big part of the culture, too. When I hung out with my friends, my friends’ parents became friends with my parents. Everybody hung out with one another at parties, with people of every age present. It was nice. I’ve always gotten along well with people who are older than me. When I was in high school, I didn’t really have friends my age. A lot of them were in college. No one at my school asked me to go to the prom, so I went with a friend of mine who was in college. We actually had to get him a fake ID that said he was younger so he could go!

What is your first musical memory?

I was five, and my parents and I were taking my brother to his piano lesson. I was the unknowing young sister who just wanted to copy everything my brother did, so I insisted on having a lesson, and I was the one who ended up sticking with it.

I went home after the first lesson and wrote a song. It wasn’t really a song, but it felt like a song to me. I went back the following week and I was really excited, basically saying to my teacher: “I wrote this song for you!”

Other than that, I remember my parents having a lot of music parties. They played guitar and traditional Persian instruments and sang. I wanted to get involved, so I played percussion on pots and pans because we didn’t have drums.

You also play drums for Sabrosa Purr now, so the pots and pans were a precursor to that?

Absolutely. I think piano and drums are way more related than people realize. Piano is a very percussive instrument. You can multitask because you can command different limbs. Piano and drums are the two instruments that have that in common. Piano was my first instrument, and I taught piano for a very long time. I stopped teaching very recently.

Do you think you’re drawn to those instruments because of the percussive thread they have in common?

Yeah, I think so. They’re very primal instruments. I just saw Birdman and the entire soundtrack was just drums, and I thought that was so great. An album that inspired me as a writer was Peter Gabriel’s Passion, which is primarily percussion. That’s the kind of stuff that really inspires me to write.

I’ve never thought of someone playing me. I can tell you who would do the music. Clint Mansell, probably, because he makes really cinematic work, but it’s also electronic and avant-garde and it can sound completely alien. I connect with that a lot. Originally, I was going to say Cate Blanchett, and I know she and I are of different ethnicities…but she played Bob Dylan in I’m Not There, and she’s not a man. Ellen Page is really cool, too.

Tell me about the genesis of Omniflux.

I grew up listening to mostly classical and orchestral music because that’s what was readily available. I didn’t know who the Beatles were until I moved to the U.S. I was into a lot of instrumental music. I did hear some bootlegs of bands like Depeche Mode, and that blew my mind and planted some seeds. Music that is dramatic and electronic at the same time really appeals to me. I moved to the U.S. and got introduced to some bands, like Massive Attack. Mezzanine changed my life. Portishead, all that Bristol movement. PJ Harvey.

I had no intention of doing music. I was going to architecture school and just thought, I’ll write songs as a hobby. I had no intention of singing or writing lyrics, so I was writing orchestral pieces, instrumental tracks. I randomly took a singing lesson, and that’s where I changed direction and realized how much I loved to sing.

I started to write songs and lyrics, which was a new avenue. It was very challenging to write initially, with English being my second language. I’m a visual thinker. But it was very stimulating, and I loved exploring that world. I would like to explore film composing later on. I went through a huge Hans Zimmer phase, and it was Hans Zimmer that made me not want to be in architecture school and make music instead. Massive Attack made me want to be a songwriter. Not just have instruments, but do vocals.

I was a really bad songwriter when I first started. I was so in my head and trying to make something happen instead of letting it happen organically. There was this PJ Harvey interview that changed my perspective on how to do it. She was talking about how she wanted to write her album White Chalk with instruments she didn’t know how to play. She doesn’t keep using the tools she’s familiar with, and throws herself into that unknown world. Hearing that was essential for me—not going after things the way I know how, but drowning myself into process.

Can you talk about the song you’re premiering with us?

I don’t write autobiographically. I create characters. The person in this song was assigned the task of tracking down this villainous other character, bringing him in, arresting him, then taking him on this Broadway theater tour of humiliation and taking him everywhere to be humiliated. Audiences are so passionate about this person’s demise, and chanting for this person’s demise. There’s very little information about this person themselves, and they buy into whatever information they’re given. Then in getting to know this person, he realizes that he’s very human and has the same needs. He’s full of needs, full of people that love him. His only crime is that he didn’t live by the rules and he carved out a life for himself, and that was threatening. When you’re first meeting a person, it’s the facts. It’s a mathematical, cerebral process. Then, you get to know the person, and your heart opens up.

Production-wise, I can listen to it over and over and be happy with it. I like the contrast. I’m proud of it. It represents everything I set out to do.

What advice do you have for girls who want to be musicians?

The first and most important thing is to live and breathe your craft. Let your focus be mastering that craft, dedicating hours and hours to it, and being able to stand on your work. The second, which is something no one ever told me, is how important it is to not be a hermit in the studio. Go out and meet as many people as possible! Not for the purpose of networking. A lot of comedians just go out and observe people, and that’s how they get their material. So just go out and meet people, have honest conversations, and learn the art of conversation. You’ll learn from people that way. That’s huge. Educate yourself. Read about different topics: science, philosophy, sociology. That way, when you go out and meet people, you can talk about anything. ♦

Paula Mejia lives in Washington, D.C., and writes for SPIN, the Village Voice, and Myspace, among other publications.