An EP premiere and interview with the duo (half of which is our own Eleanor!). 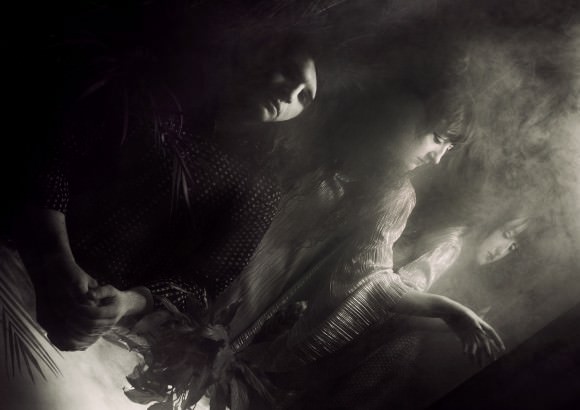 Moonbow’s debut EP, Chiaroscuro (out January 16th on Dream Machine), is a soundtrack to the feeling of lingering between sleeping and waking—when you’re acutely conscious of the fact that you’re dreaming, and you’re not quite asleep or awake. The three songs on it were made by the best-friend duo Eleanor Hardwick (who takes pictures for Rookie!) and Beau Hulse. They will be released both digitally and on an extremely limited run of lathe-cut 10” vinyl, along with an accompanying video and art zine. The EP explores extreme panic disorder (and taking a 12-hour flight alone to conquer agoraphobia), creating art, and confronting the realization that you aren’t quite sure how to spend the limited time you have on Earth.

Eleanor spent her childhood obsessed with going to shows and making mix tapes, but felt music education was overlooked in the British public curriculum. Two years ago, after passing her driver’s test, she put every Kate Bush CD in her car as a way to teach herself to sing. Now, on the cusp of Chiaroscuro’s release, Eleanor says, “If music were taught more as an extension of artistic process, we wouldn’t have this fear—especially in girls, who have to constantly prove themselves twice over, because, let’s face it: Music, especially production, is still so male-dominated.”

The lessons Eleanor has learned since getting over her musical anxieties: “Don’t be afraid of being bad at something until you get good at it. Don’t be afraid of the thing you love and want because of everyone else who is doing it. The only way we got to releasing this EP is because I thought, fuck it. Why should I know what I’m doing? As long as I just love doing it.” I emailed with Eleanor and Beau about the EP, and Rookie is pleased to premiere a stream of Chiaroscuro here in advance of its release.

MEREDITH: The bands I think to compare you to sonically, Pocahaunted and Cocorosie, are two-pieces comprised of either close friends or siblings. Would you consider expanding or playing with a bigger band in the future?

ELEANOR HARDWICK: Many good bands come in twos. Maybe because it’s a really easy way to work? I see Beau and me almost like siblings. There is definitely that honesty with each other. When we started the project, I liked the idea that collaborators could come and go for a little while, or for a song, which in a way is still possible: I don’t think bands should define their members too much, because if we met someone who just clicked and worked and we jammed, you don’t want to put limits on that! It would also be cool just to have more people to play with us live so that we can focus on one thing at a time, so that we could move around even more. But I like the control of things being small scale! You have that commitment when it’s so close and personal to you.

BEAU HULSE: I really like the project being just us, at least as far as recording goes. I’ve been in a few other bands, but it’s very different in a duo. It’s almost like an argument between two people and then the end result is what they agree on. It’s always a compromise when you work with other artists. I like the dynamic we have when it comes to creating the songs. But when it comes to live performance, I really think we could do with an extra few hands! We’re not octopi, and it’ll benefit the performance to have other people to cover certain instruments. I’ve always got my eyes to the floor at my pedals or my sampler because I actually don’t have enough time to look up. That would be nice, to be able to look at people and move about a little more.There’s nothing quite like an actual drummer, but a sampler will have to do for now!

What are your live shows going to be like? Will you adapt some or all of the visual components of the release, or are you planning something beautifully and wildly different?

ELEANOR: We’re still working it out, but what we like to do is curate each set list so that, considered chronologically, it tells a different narrative. Almost like the cut-up technique of William Burroughs: You rearrange several separate entities, and new meanings form depending on their order. For the launch, it will be this same idea: a narrative of moving from light to dark, slowly transforming throughout the performance. I won’t give too much away, but I’m thinking of having a heavy focus on lighting. I saw St Vincent live recently, and beyond just the incredible choreography, performance, set design…what really blew me away was the lighting. The potential of lighting is amazing, especially because the venue for the launch will be a church, and the way lighting can play with the contours in architecture is really special.

BEAU: I like the idea of luminous floating human skulls singing along to the music. That’s just me spitballing, though. I’m sure Elle’s got something way more beautiful (and far less comical) planned.

ELEANOR: When I saw the Knife play, they mimed the whole performance to a backing track and performed a ballet. I’m not saying everyone should mime! But there’s nothing wrong with compromising how “live” the music is to get some more animation in there. It’s hard to spontaneously jam with electronic music because it’s so defined by pre-recorded samples and drum loops. With a real drummer, you can just follow their flow. My theory is that, with enough practice, you can play anything live just as well as it sounds on the record. So I think we’ll rework the set to have more movement and less of us behind a cockpit of instruments. Do the audience members notice or care so much if the key was played at the event, or prerecorded in advance? I’m not so sure. I would prioritize interacting with them and bringing physical energy into the equation.

What’s the moral of the Chiaroscuro story? When your audience leaves on opening night, what will they have learned?

ELEANOR: I don’t expect anyone to have an epiphany over our music, but by making work about what you know and experience, you can connect with humankind in those shared feelings. I like the idea of adapting the inclusive approach of theater to musical performance. Humans have bonded through storytelling for millennia—and through their senses. We have a scent that we fill the venue with at every performance so that the audience knows what our world smells like. It’s intimate in a whole new way: I spray it on them, and then THEY smell like—and become—our world.

Art doesn’t have to have a moral, or a conclusion, and perhaps ours doesn’t. Sometimes it’s just about experience. This is the concept of the opening track, “Mariana,” in a nutshell. Depth and obsession versus breadth and experience. A lot of the songs, as they have this transformation between two spaces of light and dark, have their own epiphanies. Maybe people will sense that idea of reevaluating the same thing in a new light.

You’re doing some incredible things with the vinyl itself: It’s a lathe-cut 10”, and you’re only making 50 copies. What about this record made you feel a need for such unique formatting?

ELEANOR: People either pay for the real deal or want the mp3 for free. We’re doing both. Lathe-cut [vinyl] is great because you can do really small runs. Each record is made individually, so each one is very slightly different. The record comes with a zine of mine and Beau’s art and writing because I’m passionate about fulfilling an artistic idea by conveying it in several mediums at once. It doesn’t feel disposable or fleeting. Holding it in your hands feels very complete.

BEAU: The 10” gives us more of a platform to show what we’ve been working on. We were thinking of releasing just a 7”, but we decided to go with the 10” and put on another track. It’s a three-song EP, but one of those basically counts as two songs: It’s close to the nine-minute mark! It’s going to be very asymmetrical, two tracks on one side, one on the other. That makes me happy, for some reason.