A song premiere, plus an interview with singer Liza Violet. 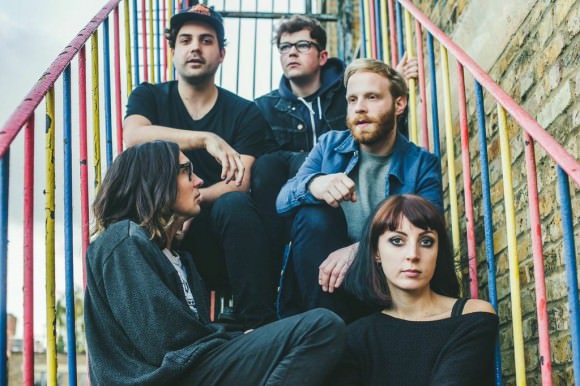 Liza Violet cofounded the Leeds, England–based band Menace Beach in 2012 with her friend Ryan Needham. Since then, they’ve shared singing, songwriting, and general band-wrangling duties. With a rotating team of bandmates backing them up, they have released a steady stream of magically soothing-yet-chaotic-sounding songs and EPs. In January, Menace Beach will debut their first full-length album, Ratworld, which features “Blue Eye,” the gorgeous song you’re about to hear:

While she was on tour in the U.K., I emailed with Liza about her favorite music, taking ownership over your art, and overcoming your insecurities by sharing what you make with the world.

BRITTANY: Let’s talk about this song! It’s very soothing. What is it about?

LIZA: “Blue Eye” is very personal to me. Its working title was “This Is My Song” because I wouldn’t let anyone else near it! I suppose lyrically there are a lot of feelings of insecurity in there, and of questioning yourself and searching for some sort of self worth. It felt like a healthy process to make something exactly how I wanted it to be.

Is music how you typically deal with feelings of insecurity?

Writing has definitely helped me with that. I’ve always been a very private person. Being in a band, you suddenly create this very public environment for yourself where you have to think, I’m going to have to let this go and not worry about it anymore. It’s totally yours, so whatever you do is the right thing to do!

You and Ryan Needham have been the core and most constant members of Menace Beach since you started. What brought and keeps you two together?

We’ve known each other for ages. One year, some other mates and I got Ryan a guitar for his birthday, and a few weeks later he came ’round to my flat and played me all these recordings he’d done. I started messing around with some guitar and synth bits, and it just seemed to really work. I think we’re so opposite in how and what we write that we leave plenty of space for each other to do what we want to do! Ryan’s a lot more prolific than I am when it comes to song writing. He tends to write the bones of the songs, and he’ll stay up writing a few a night. I’m a lot more picky, and I tend to compose things in my head before I touch a keyboard or guitar. Sometimes he gets annoyed because I’ll be sitting there in silence for ages, and then I’ll be like, “Right, I’m going to play this!” I think we’ve found our own roles, so we very rarely have a clash of ideas or opinions of where a song should go.

Menace Beach has a rotating cast of band members. Who’s in the band at the moment?

Matt Spalding and Nestor Matthews have played bass and drums from the first shows and recordings, really. Matthew Johnson, whom we call MJ, has always played guitar on the records, but he’s been away with Hookworms a lot lately, so on this tour we’ve had our friend Nick Chantler who’s in a band called Seize the Chair playing with us.

How do you maintain your privacy while you’re touring 24/7?

When you’re on tour, you just have to give up any sense of privacy, really, but you know that going in, and you become like a little family, so it’s fine. I’m a private person, but more in a creative sense. I used to hate the idea of something I’d made being out there for people to judge. Once it’s out there, it’s out there forever, and you’re like, “What if I change my mind in a couple of weeks?” Ryan is totally the opposite, and he just chucks everything he does out there; he’s put unfinished demos online a few times by mistake, and he’s just not bothered [by it].

What’s helped you overcome that with music?

Moving to Leeds and suddenly being surrounded by a lot of creative people really helped. I realized I’d been using up so much energy worrying about how people would respond to what I was doing, and about how I would feel about it, too. I’m always obsessing over whether my vocals sound OK, and I hate listening back to any live recordings. For me it’s really been about becoming more stubborn and thinking, This is how I sound, and I’m going to use it like this. Also, you have to remember that you are constantly learning and changing the way you do things, so whatever you write is a document of how you were feeling or what you were doing at the time, and doesn’t necessarily represent you forever! Watching how artists like Grimes and St. Vincent have evolved is massively inspiring to me. Music is something that I absolutely love doing, so it seems crazy to keep hiding it away all the time.

What kind of music are you listening to these days?

Moving to Leeds has been a massive inspiration, and I’ve definitely got into a lot of new music since being here, just through soaking up what my new friends were talking about. MJ, in particular, introduced me to a lot of stuff like Joanna Gruesome, Ty Segall, The Oh Sees, Real Estate, Mazes, Traams, Martha, Honeyblood, and Fuzz.

What music did you grow up loving?

I’ve got two older sisters, so when I was little I mostly listened to stuff they had around. One of them was totally obsessed with the Cure, and she got me into the Velvet Underground, Pixies, David Bowie, Iggy Pop, and that kind of thing early on. My music collection was pretty much all mix tapes I borrowed from her room, so I really owe her for that! I had a VHS tape of a live Idlewild show that I recorded off TV. Add N to (X) were on it, which is where I got the first idea of what a synth was. [Later] I got more into bands like Stereolab and Ladytron and more electronic stuff like Aphex Twin. I think I’ve always liked things that are a bit unpredictable or wonky, or where I’m like, “I never would’ve thought of that.” There was definitely a Spice Girls phase in there somewhere—but I think that was more of a fashion influence at the time! ♦