A live-performance video premiere and interview with a singer who wants to “reference everything.” 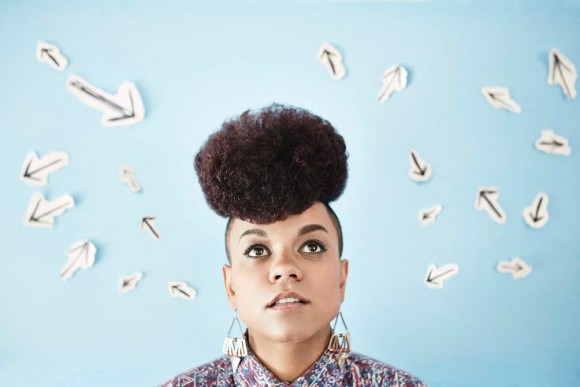 The singer-songwriter Kimberly Anne built, launched, and sustains her own musical empire from within the four walls of her London bedroom. There, she bangs on water bottles, plays guitar, and puts her voice on loop in her recordings; makes performance videos; and hangs out with her listeners on Twitter. Since releasing her debut EP, Liar, in the fall, Kimberly Anne’s momentum hasn’t slowed down: She had just finished performing an online concert shortly before I rang her up to chat about being a self-made artist, not freaking out over what other people think of her work, and Britney Spears. She’s also premiering a video of a live performance of her song “Girl Next Door” right here, right now!

NILINA MASON CAMPBELL: How did you start playing music?

KIMBERLY ANNE: I actually started out writing poetry and performing it on the South London spoken-word scene. I started to learn keyboard and accompanying the poems with a few chords on the keys, and then I kind of got tapped on the shoulder, like, “Do you reckon you’re a singer-songwriter?” I was like, Oh, yeah!

I don’t know if I fit in! I was a bit late to realize that I was a singer-songwriter because I grew up listening to amazing vocalists like Mary J. Blige, Whitney Houston, and Aretha Franklin, and they had these big, massive voices. I kind of have a medium one, and I didn’t realize that I had a voice that people might want to hear. Now here I am!

I survive off of human interaction, but I suppose I start with the music on my own. I get all of my demos together at home. The fun bit is when I get to take those to the studio and work with a producer, which is like show and tell. The payoff of being a loser and spending so much time alone is creating cool things that then lead you to do cool things with other people. I can’t collaborate at a really early stage, because things don’t always turn out feeling exactly like me, so I don’t have any choice. That’s why I love getting out on the road and doing gigs; it’s all about meeting people. So I do get out a little bit.

I love that you were able to “get out” with this particular concert by staying in your room. You use so many forms of technology to disseminate your music—what’s your favorite one in general?

I have a really goofy, geeky harness that lets me strap my phone onto my chest. Sometimes I attach my phone to my chest and film things that I’m doing, and that’s a really cool way of sharing videos that don’t quite look so contrived. It’s a way to get footage that’s a bit obscure and a bit wonky—but it’s the world from my point of view while I’m creating. I just edited my first little video of all of the clips together. It’s totally messy; it’s like a scrapbook. It’s not meant to be really nice and professional. It’s meant to be, “This is life from my point of view at the moment.”

You mentioned that if you collaborate too early, your ideas might be mutated by someone else’s. Have you had an experience like that?

I first started out trying lots of different music. I tried being in a punk rock band, doing the R&B thing, doing the folk thing. I was always in a big group, so I didn’t have enough confidence to just jump in there. I was trying to absolve myself of musical responsibility. Working within a massive group, it’s like all for one and one for all. If someone doesn’t like the track, you’re like, “Oh, well, it’s our track” [and] you can hide behind, “It’s our track.”

[Working with others] I came up with ideas that got a bit convoluted in the end. They came out not looking exactly like how I thought I’d put it in the little machine; like a Play-Doh machine, when it comes out of the side looking like spaghetti. It took me some time to get the confidence to just pick up and instrument and go, “No, you can finish this. You don’t need to take it to someone who you think can play better than you, or someone else who knows music theory better than you. You need to just follow your instincts and see how you go.” Even if you’re writing the whole song to the most simple bass line, you need to do it from start to finish.

Was finding that confidence a “fake it till you make it” situation?

I don’t know if I found it. I gave up on music [for a little while]. I got to a point where I felt like none of the music was coming out how I imagined it or how I wanted it—in all honesty, it was a bit boring. It wasn’t very exciting, and I was trying really hard to be exciting. When you’re trying to be exciting, you’re actually really dull. It’s exhausting. It was too much.

I respected so many other musicians and artists in the industry—people I’ve grown up listening to—I was just like, “This is good music, I’m not making good music, so I should stop.” I was really frustrated and it was making me miserable, so I was just like, Put the guitar down and live your life. Just be a human, and if you have something to say, then the urge to say it will come out. Only return to music if you really mean it.

I worked a full-time job in a youth theater and made my own poetry, music, and drama. I chilled until I started to make little demos again in my bedroom. I didn’t really care if anyone liked it, I didn’t care if anyone heard it—I was doing it for me. I shared it with a couple of friends and I had the confidence to say I liked it, whereas before I looked for validation from other people. The moment when you have that Road to Damascus and you pick being yourself over trying to be someone else is, as cheesy as it sounds, the combination to unlocking true creativity. I promised myself I would look after and stay true to myself and try not to be manipulated again. I’m the one who’s in control of that, so I need to be honest with myself about when I need to step back, and when I need to be writing as much as possible and not seeing anyone.

Do you think not needing external validation about your music impacts the rest of your life?

I would love to say that I’ve reached that zen. I have every intention [of doing it]. Lots of us know what we should be doing and what we’re feeling, but I’m human. I get those, “I feel sad today, I don’t want to leave the house” moments. You have to take every day as it comes, but having self-belief and surrounding yourself with positivity and people who are on the right vibe is really important. People who aren’t always watching what everyone else is up to and comparing what you’re doing to what someone else is doing. I take that into personal life and business life. If you really know what you’re doing and you’re really unique, then you won’t worry about anyone else doing better than you or ripping you off, because you’re too busy doing you, and no one can do you if you’re unique. Every day is about just trying to build yourself in a positive light.

Do you think creativity helps you move forward in that respect?

I hope so. I hope that’s the good in me. In this industry, when you play and you’re an artist, you kind of get a bit consumed in your own project. Everything’s about you in a weird way when you’re a solo artist; you go do interviews, you talk about yourself, you write music that’s about you, you go and play gigs and tell people stuff about you. It’s easy to get wrapped up in that I guess, but doing things like my online gig tonight and people sending me messages afterwards telling me what those songs meant to them, it’s just so surreal. How your music can have such an impact on other people and it really doesn’t enter your mind until such a late stage, which I think it the right way to be. You can’t make it contrived. You have to create openly, then when you get that feedback from people saying, “This actually made a difference in my existence,” it’s a mad thing to have going on. Music is the good thing about me.

I read that Bloc Party was an influence of yours. Was this around the time when their debut record came out in 2005?

That album, Silent Alarm, was so significant. It’s one of those album where each song reminds me of being at college and certain relationships I had there. Every song takes me to different points. Breaking up with someone in my car, all that stuff. It’s definitely an iconic album for me. That was around the time that We Are Scientists came out, and I was really into Foals. I grew up on everything, I was into the normal rockier stuff when I was younger, like Nirvana, but then I got slapped on the face by indie and I was like, “What is this!?!” and got into the Cardigans and Bloc Party.

They’re amazing—they’re just such a British band. I grew up a lot on American bands, so it was cool to have a band from around the same country who spoke like me and even has a front guy with little, short dreads. You’re just like, This is so cool!

There are so many genres and bands mashed up in your song “Heartbroken Medley“—T2, Nirvana. How did you put that together?

I was trying to work out an acoustic version of “Heartbroken” by T2. It snowballed into another track from that garage era in the 2000s. I listened to garage growing up, so those two songs [at the beginning of the medley] are important. They touched me in a weird way and reminded me of going out for the first time, and things like that. It spiraled into other songs that didn’t necessarily have the same chord structure or arrangement, but I bent the songs to fit those chords. Every single one of those tunes is one of my favorites. I wanted to try to find a way to express that love.

Do you believe in such a thing as guilty pleasures?

Of course! Britney Spears is my idol! She’s amazing! I love her. She’s so cool; she can’t really do anything wrong in my eyes. I like all different kinds of music. It’s important for people to know how many different ingredients go into making an artist. It’s so easy for people to reference one or two people you think they sound like, but I grew up listening to Limp Bizkit and Slipknot down to classical music. You’ve got to reference everything. ♦