How to Write a Celebrity Profile of Your BFF

Because you’re their biggest fan! 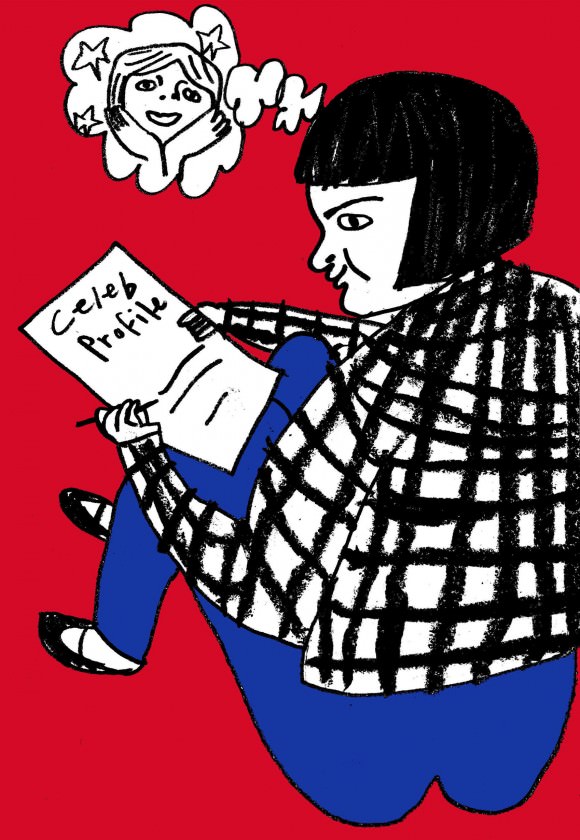 Do you ever imagine what a magazine profile of you would sound like if you were a celebrity? You know, one of those cover stories wherein you hear how a famous person is learning to live, laugh, and love in the limelight. I’ve held up enough grocery store checkout lines browsing the latest issue of Vanity Fair thinking, What if they were talking about me?, that I should be embarrassed, but I’m shameless. So far the best theoretical magazine profile of Gabby Noone starts off like this:

“Bossy” by Kelis begins to play throughout the restaurant as Ms. Noone, a vision in a holographic jumpsuit, saunters toward me and slides into the booth. She slams down her purse, a pink bedazzled clutch that’s part of her capsule collection for Home Shopping Network. “Funny,” she says wryly, “this is the third time this week I’ve heard this song as I’ve walked into a room.”

FYI, it’s in a magazine called Lowlights, an imaginary spin-off publication of the educational children’s magazine Highlights—but about former child stars instead. Oh, also I’m a former child star in this fantasy.

I love celebrity profiles because they’re not only a glimpse into what a famous person will order off some upscale hotel restaurant menu or how pore-less their real-life, un-Photoshopped skin looks—they’re a glimpse into their souls. OK, maybe that’s an overstatement. Maybe I just really like hearing descriptions of what people eat and look like in general. (You will never hear me complain about someone posting too many food pictures or selfies because they bring me too much joy. Like, I really do want to see that delicious sandwich you ate for lunch and how good your hair looks today. I’m happy to know you’re thriving!) I also realize that these interviews are usually nothing more than a thinly veiled excuse for a famous person to promote whatever movie, album, or other project they’re working on, and in turn, for the magazine to put that person on their cover and sell a lot of copies. I’m not hating on that, but more often than not, this kind of piece feels like a futile attempt to paint some intimate portrait of a person who the writer has barely met (see: this quote from The Perks of Being A Wallflower).

Wouldn’t you rather read about someone you know? If stars really are just like us, why aren’t there elaborate profiles of us, huh? I say we take this matter into our own hands and start writing glowing essays in praise of our friends! But isn’t that friend fiction? No! Well, maybe—but this is another way of manifesting your friends’ dreams into meaningful documents.

I’ve broken down the celebrity profile, and its most common tropes, into step-by-step instructions on writing your own (using myself as an example because you’ve got to be your own best friend to get to the top).

1. Introduce your friend’s accomplishments to readers.

What is it, exactly, that your friend does in this imaginary article? Think about their current hopes and aspirations and then spin them into a future occupation. Maybe they’re the first Vine star to make a full-fledged movie, or a groundbreaking talk-show host/scientist who’s created a toothpaste that makes orange juice taste better. Perhaps they’re your run-of-the-mill triple threat. For example:

Reality TV stars who attempt to cross over into the music world rarely get any respect. One only has to look the bevy of Real Housewives who’ve released pop singles and have failed to get any recognition beyond ironic listening. However, Gabby Noone, star of Bravo’s hit reality show, Noone Cares, could be the game changer. Her first single, “Oops, I Don’t Want to Do It Ever,” just debuted at Number One on the Billboard Top 100.

2. Then bring the friend back down to earth.

This is the part where you compare your friend’s future dream-self with the person you know and love right now. The person someone might find when typing your friend’s name into a Google Image search with the phrase “before fame.” Like, think about something that embarrassed them recently, and then bring it into a better light—something they’ll laugh about years from now, when they’re popping Champagne while relaxing in their gold-plated Jacuzzi:

You may know Ms. Noone as the world’s most elegant competitive hot-dog eating champion, but not so long ago she was a simple girl who couldn’t get through the day without spilling food on herself. “It’s true,” she says, “I had to pack a Tide to Go pen in my backpack. I was so messy and, to be honest—I still kind of am!”

Where’s this interview taking place? A fancy hotel? A chain restaurant that lets the reader know that despite the fame, your friend is still soooo down-to-earth? A skate park? Perhaps a restaurant that doesn’t even exist yet, like an upscale pizza boutique that makes your perfect pizza by scanning your fingerprint and mining a database that knows what you’d like? Essentially, think about their ideal place to hang:

When Ms. Noone glides into the cozy diner in New York City’s West Village on a Thursday morning, her presence is much like a disco ball’s in a darkened ballroom—partially because her coat is embellished with fragments of an actual disco ball. At the sight of the star, children’s eyes widen in delight and adults in suits pause their serious breakfast meetings to gape. We’re led to a table in the back and she orders banana pancakes without even consulting the menu. “Everything’s good here!” she declares.

At this point, detail a dream version of your friend’s outfit—something glamorous or outrageous that, so far, they’ve only wished they could wear. Compare their physical features to inanimate objects for the ultimate celebrity-profile effect:

Ms. Noone looks flawless, with lips as red as a cherry Icee and eyes as blue as a…blue raspberry Icee. In fact, she’s wearing a two-piece crop top and skirt outfit printed with all sorts of—you guessed it—Icees. “Look,” she laughs, “I really love frosty fruit-flavored beverages. I can’t help it!”

A key moment in any juicy celebrity profile is the section where the writer tries to slip in a question about the subject’s rumored love interest, and they respond with a coy, non-definitive answer. Now is a good time to mention your friend’s ideal soulmate, too. You can have them respond however you’d like, but bonus points for vagueness:

When I mention Ms. Noone’s rumored house-husband Mark Ruffalo, she simply rolls her eyes. “Can we please talk about something more interesting?”

6. Pause to describe them delicately eating some kind of indulgent or luxurious food.

The secret here is to use any verb to describe eating that would make you uncomfortable in in everyday conversation. Examples:

She glides her fork into a heaping bowl of spaghetti bolognese.

She pops an oozing morsel of brownie into her mouth.

She claws at a buttery brioche with her sharply pointed, exquisitely manicured fingernails.

7. End with your friend mentioning some vague life philosophy.

Conclusions are as tricky for journalists writing celebrity profiles as they are for someone writing a paper for English class. You never want to end too abruptly. The trick is to leave readers with a quip from the celebrity that could easily double as an inspirational quote on a Pinterest board:

It’s easy to wonder whether it gets to be too much—balancing her talk show, her love life, and her chain of lobster-restaurants-slash-nail-salons (Nails ’n’ Tails). “Life is a gift,” Ms. Noone says, “and I’m unwrapping it very slowly.”

Congratulations! You’ve written your first celebrity profile—and you probably have the next “Frank Sinatra Has a Cold” on your hands. Get ready to deliver it to your favorite person this holiday season, because you’re their biggest fan.