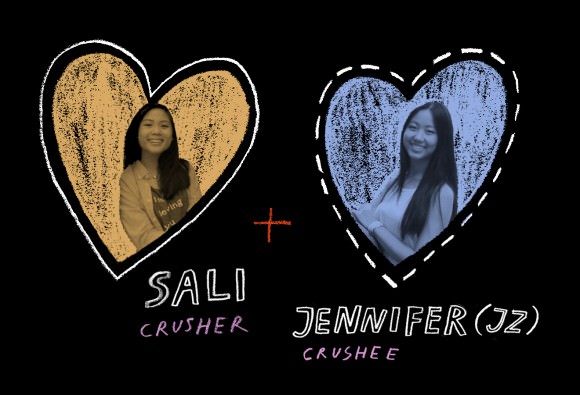 Sali, 19, and Jennifer, 18, met-cute at an orchestra concert near their respective middle schools in upstate New York. Since then, they’ve LITERALLY been making beautiful music together (in addition to dazzling each other with their individual smarts and social skillz). They share one of the greatest stories about sneaking into a Cheesecake Factory that has maybe ever been told, which they will recount for you here in all its rebellious glory.

TO: [email protected]
FROM: Sali
SUBJECT: Friend Crush (not the orange soda, but a human being I enjoy)

I’m writing to you to tell you about my amazing BAFFL (Best Asian Friend for Life) JZ (she’s not Jay-Z, her real name is Jennifer). I met JZ in seventh grade at an all-county orchestra event. She’s literally a flute goddess, so that’s how I met her (I am not a violin goddess, but that is besides the point). In ninth grade, we ended up seeing each other regularly because, even though we went to different schools, we were in the same regional orchestra. I don’t know exactly what triggered it, but before I knew it, we became BAFFLs. She is the coolest person ever (literally because she’s a figure skater, figuratively because she’s the sweetest and funniest person). [In high school,] boys would call her the ice queen because they thought she was stuck up (Note: Not wanting to date someone doesn’t mean you’re stuck up #byefelicia).

JZ is one of the people that I genuinely look up to. She’s smart as heck (she was the valedictorian in her class), and one of the most down-to-earth people I know. She is an obsessive gamer, and has three iPhone homescreens’ worth of games. She makes me laugh more and harder than anyone else can. She is the best cuddle companion (I know because I’ve shared a bed with her, and my boyfriend, and she beats him 10 out of 10 times). She always motivates me to be the nicest/best person I can be. What’s more, her love of her culture (she’s Chinese) is inspiring—in high school, she did Chinese cultural dance, and it was the most beautiful thing to watch.

JZ is also the most thoughtful person ever, and is the first person I would want to share some bubble tea with. She sticks up for me, like when I almost cried at Brandy Melville because the worker closed the store 20 minutes before it was supposed to close, and I really wanted to go in and buy this shirt (she used hand gestures to convince the clerk to let me in). Even if we’re at completely different schools now (not just in different parts of the city, but colleges in different states), she sends me letters and remembered my birthday, on which she sent me a pencil case because pencil cases are rad. She is my ultimate friend crush.

Your email about Jennifer was adorable! I love that you bonded in a regional orchestra. Has music been a big part of your friendship?

Music was how we met each other. I saw Jennifer at a county-wide orchestra thing in middle school, and I said hi, but we never really hit off. But when we were in the regional orchestra in high school, I would see her every week, and that’s how we became friends. I think some of the best memories of being in orchestra are probably hanging out with her, and being able to go on trips with her, going on orchestra retreats and sharing a bunk bed together, that type of thing. And, like, in college she’s in orchestra and I’m not, and it’s kind of different because we aren’t going to the same rehearsals together, but I will sometimes be listening to a classical music station on the radio and hear a flute solo in some piece and I’ll remember her. Whenever I heard a flute solo in high school I knew it was her, if that makes any sense! It was really awesome. But we aren’t all about just classical music. We really like stuff like the Arctic Monkeys, too. So whenever I hear that [that band] come on I think of her, too.

Tell me a little bit more about how you complement each other.

I feel like, at the beginning of our friendship, we were very much opposites, I guess, because I was very outgoing and outspoken, and she was pretty shy and quiet. Now it’s kind of balanced out, like we almost switched parts. I’m a lot more subdued now, but I don’t know if that was me growing up or me taking on her qualities or something!

You said she used to get called the “Ice Queen” by some boys who were clearly unworthy of your and her attention! What are some of the traits that you admire about her?

The thing with Jennifer—and it’s something that I never do—is that she always thinks before she talks. I’m someone who just says whatever is on her mind, and that was never a good thing in high school! I dunno, she has standards, obviously, stands her ground, and never lets anyone get to her. She’s honestly one of the sweetest and nicest people, and it’s really interesting, because a lot of the people you make friends with in middle school and high school are outgoing from the get-go, and you don’t really have to get to know them better, but with her it was very…the more I got to know her the more I got to love her.

Getting to know her must have taught you a lot about people.

Yeah! Honestly, on my first birthday in college, because I’m a freshman this year, I didn’t think anyone from home was going to remember it. But I was really surprised when I got a package in the mail that day, filled with little goodies she had gotten me. It really meant a lot that she remembered my birthday, because she has a lot of stuff to do, too. Especially because my birthday is on Halloween, and most people forget about it!

I loved the story about the shirt at Brandy Melville—it’s so sweet. How has her thoughtfulness helped you guys to be more open in your friendship?

Well, the fact that she really cares about me and really knows me. Like, sometimes, if I’m having a really rough day I may not be really open about what happened that day, but she’s one of those people who really listens, rather than projecting everything she thinks onto me. And I think that’s actually helped me become a better person, because she never makes it about her when we are having a conversation—she’ll always ask me questions. That’s something I really admire about her, that she’ll remember little details that I told her in a conversation that happened two months ago, like friends’ names and events, and that’s really nice. Literally when we were applying to colleges and stuff, she would remember all these little things that even my parents probably wouldn’t remember if I told them!

It can be so hard to be that person for your friend, to put them before you and to really listen. I think that’s really incredible!

Yeah, she’s like the coolest person ever to me, out of all of my friends! And I know she was going through a rough adjustment period in college, so the fact that she would still care about what was going on with me was pretty awesome.

We were both really obsessed with this YouTube channel for a while, but that’s kind of died down now. I don’t know if you’ve heard of it—it’s this really peppy, happy person leading a really intense workout, and we both hated her, but we both started it anyways. We would always time each other! We also both really like eating new foods, we’re both very obsessed with food. We also keep up with the same kind of news, like we were both really interested in the University of Virginia [campus rape] story that came out last month, and we were really interested in not just the story but how it affected girls in all different colleges. We’re both really into photo-editing apps, too, which is really the most random thing ever! It’s really fun to get a photo before and after it’s been edited, to see how they’re different.

So Jennifer is a flute goddess, figure skater, gamer, valedictorian, dancer, and master cuddler?! And she’s a multimedia queen!

I know right? I think the cuddling is the best quality though, out of all the things that she does. I don’t think that she had actual cuddling lessons though, you know what I mean? She’s also a really intense performer, which is interesting, because when you first meet her, she’s kind of shy, but when you see her on the ice or dancing it’s such a different side of her. It’s like a side of her that you wouldn’t have expected.