You’re not in a fight. You’re talking to someone about something you care about. 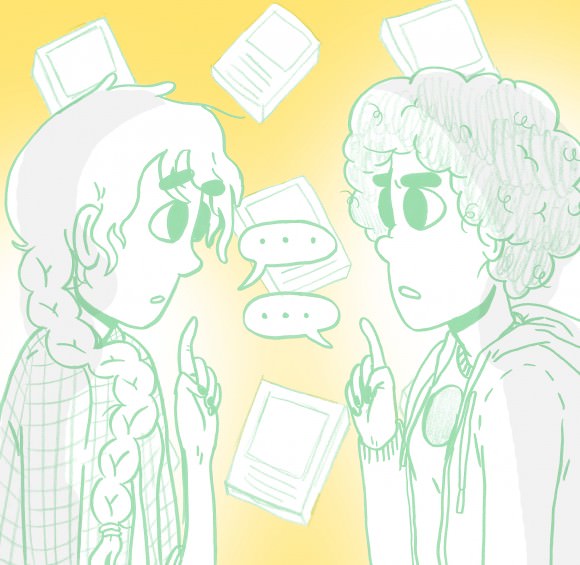 Presidential debates, legal arbitration, diss tracks—thinking of disagreements as competitions, where one person wins the conversation and the other person loses, is basically embedded into the foundation of Western culture. Though it may be common and perhaps even natural, this sort of competition discourages compromise, can create animosity, and is a powerful stumbling block on the road toward becoming a compassionate communicator. In extreme cases, these arguments are more about insulting someone to achieve a sense of victory or superiority than the actual issues at hand, which clearly isn’t cool. Most often, though, this attitude is responsible for turning what could be a minor difference of opinion into a full-blown, completely futile verbal brawl, with both sides refusing to concede “defeat.”

Whenever I’ve thought of disagreements as things to win or lose, I’ve had to make myself numb to whatever the person I was talking to was saying or going through because, at least in my mind, acknowledging their feelings or opinions would compromise my victory. And yet, the sort of victory that comes from hardening myself against someone else’s experiences isn’t the sort of victory that I’m interested in—it just isn’t gratifying in a way that I can be proud of. If I can strip away that competitive element when I’m faced with a conflict, and instead see the conflict as a way of working through a difficult or distressing issue, then I’m no longer in battle mode, and it isn’t imperative that I shoot down every dissenting remark or guard myself from having an emotional reaction. I don’t have to agree with the other person, but by dispensing with that whole win-lose dichotomy, I’ve created a situation where I can be open to what’s said to me, and hopefully present my opinions in ways that aren’t strictly adversarial.

When I hear some fancy person in a movie use the phrase “I respectfully disagree,” it’s usually just a pompous, faux-polite way of intimating that that character doesn’t give a damn. To me, though, it means the exact opposite—it’s about acknowledging the feelings and basic humanity of the person you’re clashing with, and it’s an essential part of any argument or debate. I’m not encouraging anyone to live a kumbaya-style “avoid conflict at all costs” sort of life. I’m also not laying down a “Miss Manners”–esque, finishing school, polite young women behave this way” set of rules. All I’m saying is that it is possible to have strong opinions and beliefs and still be a sensitive human being, which can be very easy to lose sight of when you’re in the middle of a heated debate. Here’s how to make sure you don’t lose your head while you’re trying to make your point.

1. Actually listen to the other person.

When a conflict arises and the other person is speaking, instead of stewing or silently formulating the verbal smackdown that you are about to bequeath upon your antagonist, sincerely and thoughtfully consider their words and emotions—not what you THINK they’re saying, or what you want to respond to. Genuine, effective listening—that is, really hearing what’s being said—is about being attentive. You’re focusing on the speaker, making eye contact—you are engaged. You should be able to repeat what has been said to you in an objective way—without judgment or hostility (though, depending on the circumstances, you may not have to literally repeat it).

When I have a disagreement with my boyfriend and it’s clear that we’re deadlocked, it can be satisfying simply knowing that he’s understood what I’ve said. One recent, pretty minor example: I think he should invest in a Mac but he clings to his very basic PC with a Ron Swanson-ian Luddite fervor. When I told him that Macs are more user-friendly and durable, and went over the myriad reasons why I think he’d enjoy owning one, he listened attentively, didn’t cut me off mid-sentence, and then plainly told me that he got what I was saying and saw why I like Macs, but he just didn’t want one. After considering what I said, he still knew that a basic PC is a better fit for his minimal computing needs (which I understand because I listened to him).

I’m not a Mac evangelist or anything—you know, zealously spreading the good news about Apple Inc., Tim Cook, and the MagSafe power adapter. But I just thought, specifically, for my boyfriend, a Mac would be perfect. It was frustrating when I was unable to get him to change his mind. However, that frustration was mitigated some because he didn’t appear to be totally disregarding what I said. He didn’t give the impression that he thought my opinion was stupid or worthless. He simply disagreed with me. Resolution can just be mutual understanding—you’ve absorbed their perspective and they’ve absorbed yours. While that may not be the most desirable outcome, in situations where both parties are steadfast in what they believe, it can be the most amicable one.

When you don’t listen, you’re essentially saying that your opinion is the only one that matters. But when you do listen, it shows that you value the person you’re speaking to, recognize their right to have an a opinion—even if the two of you aren’t seeing eye-to-eye, even if you HATE their opinion—and it demonstrates that you are at least open to working toward some type of solution, whether that solution is just mutual understanding or the type of collaboration that leads to major social change.

As clever, well-read, and worldly as you may be, you don’t know everything. You can’t know everything! You can’t fully grasp what it’s like to be black, an American Indian, gay, or someone with a mental illness if that hasn’t been a part of your life experience. You can’t know what it’s like to lose a parent or be bullied mercilessly if those things haven’t happened to you. Hell, you can’t know the best way to prepare jerk chicken if you’ve never cooked it before. Sensitivity and compassion emerge when each of us recognizes the limitations of our worldview. As So-Crates once said, “The only true wisdom is in knowing you know nothing.” I’ve found that people who don’t acknowledge their own fallibility and cosmic ignorance speak in really disturbing and unsympathetic absolutes. They seem to have this inability to question their own opinions, and that’s scary.

In October, The Daily Show’s Jon Stewart spoke with the conservative Fox News host Bill O’Reilly about white privilege—the idea that because of the color of their skin, white people are afforded certain societal advantages that people of color aren’t. O’Reilly doesn’t believe that white privilege exists and said, “If you work hard, if you get educated, if you’re an honest person, you can make it in America.” How does he know that? He’s a white man. He’s never not been a white man. So, how can he know that what he’s said is true with that much certainty? Yes, the United States has a black president, and there are many successful people of color, but what about the hardworking people of color who are struggling? If we’re being sensitive debaters, then we can’t just totally discount dissenting voices because their experiences don’t jibe with our rigid notions of truth. One of the benefits of conflict is that it allows our truths to evolve, grow, and gain nuance as we are exposed to perspectives that are different than our own. But even when our beliefs are firmly rooted within us, we can still be open-minded by having the humility and self-awareness to acknowledge that our ideologies are not universal truths.

So how do we talk about ideological topics in a productive way—that is, without sounding like an insensitive jerk? First, remember that you have to express your opinion as maturely and precisely as possible. This means not pulling any playground crap: Don’t scream in anyone’s face, or say, “You’re wrong,” when you really just mean “I disagree.” The semantic difference between these two statements is slight, but real. With “I disagree,” you’re subtly acknowledging that a dissenting opinion could be valid for someone, but that person isn’t you. When you say, “You’re wrong,” you’ve dismissed the opinion’s validity altogether.

If you accept that your truth isn’t everyone’s truth, then you don’t have to take every ideological disagreement personally, but with that acceptance comes the responsibility to use language that reflects the level of consideration that you have for opposing views. When we’re talking about issues like race, class, politics, and religion, we’re usually talking about beliefs that are colored by personal experience and tied in some way to identity. If you use hostile language during your debate or disagreement, it can feel like a personal attack against those closely held parts of a person, which undermines your position and can obviously be hurtful.