Why Can’t I Be You: Honey Power

An interview with an art collective that’s about camaraderie over competition. 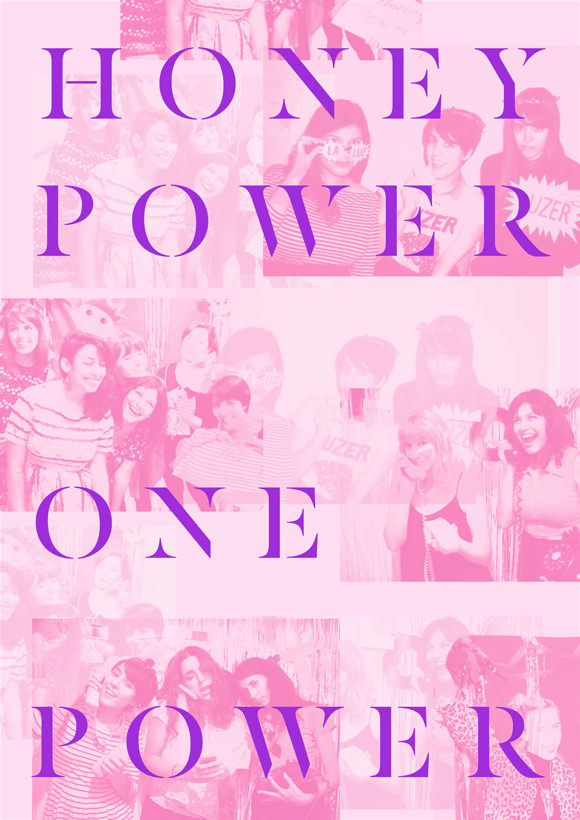 Honey Power is an all-female music and arts collective that books shows, hosts parties, makes zines, and holds workshops in the Los Angeles area. Started by Mukta Mohan, a DJ at the independently run radio station KXLU, and Chelsea Brown, one half of the sister band Summer Twins, Honey Power has grown to include 20-plus members who put on intimate, completely decked-out events, like secret living-room shows with the bands La Luz and Tacocat and girls’-night slumber parties amongst the stacks at the Burger Records store. We discussed how to expand a group while maintaining your creative vision, facilitate a safe and welcoming space, find the time and energy to make things happen, and start booking DIY shows.

DYLAN: How did Honey Power start?

MUKTA: Honey Power happened over time. We’ve been a collective for almost a year and a half now, but it only recently started to look like the group it is today.

CHELSEA: You and I always talked about starting something together as friends, maybe a band, which was our original idea. I went to Japan [on tour with Summer Twins] and met Twee Grrrls Club, a DJ collective that makes zines and puts on shows. They set up our whole tour. They’ve taken Vivian Girls on tour; Hunx and his Punx just did a tour with them. They set up these awesome shows where it’s a whole experience. They make decorations with the band’s name on them. Everything they do makes the bands feel so special. I was blown away by that. When I got back from Japan, I was like, “This is what I need to do!” So I gathered all my Twee Grrrls Club zines and met with Mukta. We talked about starting a collective—just a small thing with the main focuses being DJing and booking fun shows.

MUKTA: A Twee Grrrls Club–style collective was something tangible that we could do. I knew how to DJ already, so it was perfect. We could have a reason to make zines and hang out!

CHELSEA: We decided that we would each invite someone else into the group. I invited Justine, and you invited your friend Gabby, and that was the initial group. Mukta taught us all how to DJ.

MUKTA: Our very first event was this big festival in Los Angeles. We DJed right before the Drums and Fools Gold at this huge show. I had DJed before, but the other three hadn’t!

CHELSEA: We had a rough start trying to DJ…we’d forget headphones, or start songs at the wrong speed…

MUKTA: But we had our matching outfits!

CHELSEA: And the SPIRIT!

Which is what matters!

MUKTA: Now Honey Power has so many more people in it.

CHELSEA: It’s been hard trying to organize a big group, but we’re getting a little better. The group expanded organically: Friends started helping out. And pretty soon those friends were in the group, and those friends invited their friends.

MUKTA: Recently, we decided to have a big meeting where everyone could come together and add a few more people, too. We have committees that we’re still trying to organize, but they’re a little bit more structured. It’s great: We have a web team that meets, the event team is meeting soon, the workshop team is going to meet next weekend.

How is the transition going, from being two best friends just hangin’ out to being more official and managing other people?

CHELSEA: I was a bit nervous: Suddenly it’s not just us. It’s a group of around 20 girls. All these different people are representing us. But now we have all these new people contributing different ideas we wouldn’t have thought of on our own. When we first started out, we were trying to do events with four of us running the show, setting up the PA, DJing, putting up decorations, running the door, running the merch. It was stressful—not even fun after a certain point.

MUKTA: All while still trying to make it a show that was exciting and memorable and different—and community-creating.

CHELSEA: Our first event as a new big group was when we did our Cell Out show in September. Everyone was required to power down their devices as soon as they entered the door. It was cool—all this help came together so perfectly. 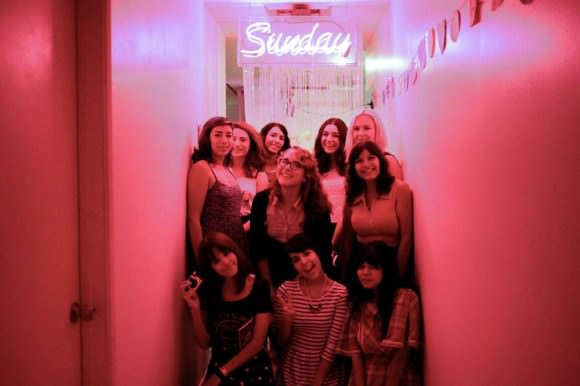 MUKTA: It was so amazing. It was exactly what I envisioned the show to be, and I know we couldn’t have done it on our own. Everyone contributed a little bit, whether it was time, decorations, DJing, working the door…

CHELSEA: Even just spreading the word and telling their friends about the show.

MUKTA: Whatever it was that they could contribute, they did, and it ended up being my favorite event of the year.

CHELSEA: The cool thing is that I didn’t know half the girls that have joined. We’ve made new friends and collaborators out of this, which is really exciting. People will give whatever skills they have. We have photographers and videographers that shoot shows, illustrators design the flyers…it’s like we took all these different girls with useful skills and put them all together, and it’s just worked.

MUKTA: We’ve been doing a great job with it, but I see the skill-growing, learning, and sharing part developing a lot more. My roommates joined Honey Power recently. At first, they just saw it as The Thing That Mukta Did, but now they’re in it and fully consider themselves a part of it. The way they see themselves in it is more like having a safe space to practice their skill sets. Anything they want to grow in creatively, they have an outlet for here.

For example, Jessica wants to make flyers and work on graphic design and animation, so she makes our flyers and animations to go with them. Cara wants to focus on making videos, and she makes recap videos which we post on our Facebook page. It’s a really low-pressure, supportive group to practice your skill set. Something I’d like to see when we’re at that level: Once we have our current members developing their skills more, we could add more people into the group and put them in the committees where the can practice their skills. It would give new people an opportunity to practice and develop a skill set and grow creatively and professionally from girls who’ve already been contributing.

CHELSEA: The cool thing is, there’s no pressure. It’s how committed you want to be. Everyone’s busy; whenever you can pitch it, you do. It’s not like a job. We definitely don’t want it to be that way!

Is managing all these new people challenging?

CHELSEA: It’s a struggle to get organized at first, and we’re still trying. We kind of used Rookie as an inspiration for that. I talked to Marie and asked, “How do you guys communicate online?” We had tried several things, from a web group to an email chain, none of which stuck. Marie told us the Rookie staff uses a private Facebook group, and so far that’s worked out a lot better. People who don’t have Facebooks will just create one to join the group. I still think to get organized we need an official point person to answer emails and be in charge of communications.

MUKTA: It’s so different to do anything on your own. That’s what Honey Power’s growth has validated. At first, we were hesitant when we added that entire group. The first big meeting after that, I was scared of it being hard to manage. We didn’t really know everyone. But the first show proved it was worth it.

In terms of new contributors, people end up showing the initiative they’re willing to take. They show a level of initiative, and they act accordingly to what they can contribute to the group. You do see natural leaders step up, and it’s not always predictable who that might be. We’re still growing and developing. What we look like now will probably be different next year.

CHELSEA: Looking back, we’ve always started off small. Small group, booking small, intimate shows. It’s the way to do it.

MUKTA: Even now, with 20 people, we’re still booking shows at houses. We still like to keep it small, and that’s intentional. We want to keep it all DIY venues and houses. No matter the size of the band that plays, the experience is going to be a lot more memorable. We want to feel like everyone can talk to each other. We’ve noticed that people feel more comfortable starting conversations with strangers in someone’s backyard or living room than they would at a regular venue! Still, we’d love to have a show that could get 500 people…if we could book a club and turn it into someone’s living room, that would be amazing!

CHELSEA: Maybe when we get big enough that we have to start booking larger venues, maybe we should just turn them all into living rooms! Rugs, lamps…

MUKTA: Keep the lights awkwardly just a little too bright…

CHELSEA: Make the band play on the floor! 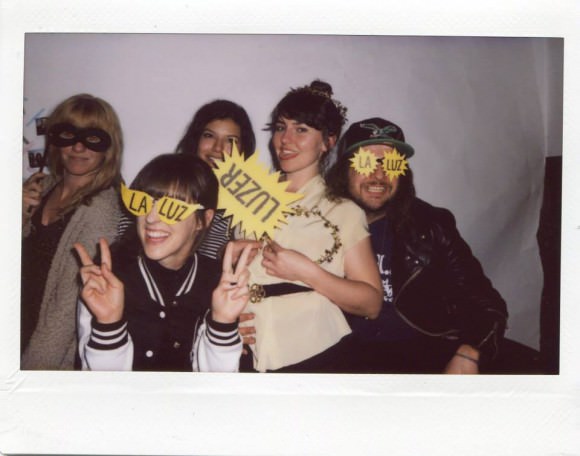 You two have created a fun community that people are incentivized to want to be a part of. At the same time, you need to have a reasonable bit of structure. How do you guys maintain an interested group and keep it growing?

CHELSEA: Ultimately, keeping everyone motivated comes down to wanting to be a part of something. I think both members and the people who come to our events enjoy being a part of this. Our goal was to create a community that feels inclusive. In LA, a lot of shows, a lot of the music scene…it’s like everyone’s “too cool.” At shows, people aren’t really listening to bands, they’re just drinking, talking to their friends, acting kind of jaded and detached as audience members. What fun is that? We want to turn that environment around by celebrating the bands, make them feel special, and make people feel excited about music again.

MUKTA: That was a huge driving force behind Honey Power from the very beginning. We all recognize that culture—people standing around at shows, even in the music is amazing and danceable. Shows become a who’s-who and are-you-cool-enough kind of scene, rather than a gathering place for people excited about the music. That’s really lame, and we don’t like it! A big goal of ours is to make shows welcoming for anyone and to feel like they can start a conversation with a stranger and that won’t be a weird thing to do. I mean, you’re both at the show because you like the same bands. You must have something in common!

CHELSEA: From the artist’s side of it, when you play a show, it’s a LOT of work on the band’s part: driving to the venue, unloading your gear, performing. When people aren’t listening or appreciating it, it starts to feel not as fun, and you ask yourself why you’re even doing this. We want to make the bands feel really special and appreciated—just like how we felt in Japan.

MUKTA: These two things were really our goals from the beginning: creating an inclusive and positive experience and making our artists feel wonderful.