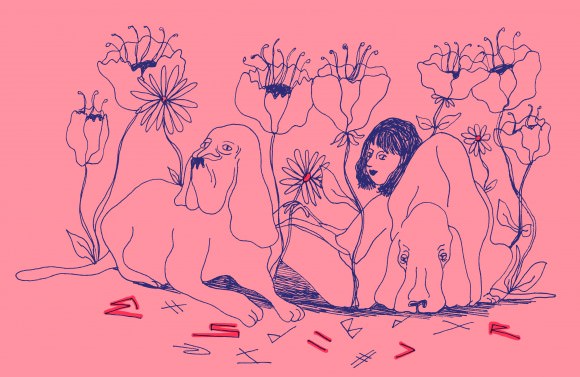 When I was eight, my best friend Judith told me she knew a secret alphabet dogs used to communicate with one another. I was amazed: I wanted to know what dogs were saying! They were so cute, and I was willing to bet that their thoughts were cute, too. Suddenly, it was like there was this invisible bubble of mutual understanding around Judith and dogs—and I wanted in. Badly.

I begged Judith to teach me “dog,” and she crouched down and started making marks in the dirt. “They have letters that are different from ours,” she explained, “and my neighbor’s dog told me what they are.” As she etched symbols into the ground, I became suspicious. Did a real, live dog actually start drawing these little squiggles for her? I felt kind of stupid as it dawned on me: Of course there was no canine Rosetta Stone! I laughed and accused her of making the whole thing up. She admitted that she totally had.

Even though it was fake, Judith’s dog alphabet was a thrilling introduction to the idea of codes, which substitute obscure kinds of symbols and speech for more common language. I knew there were countless languages that I didn’t (and would never) understand. But these were sneakier methods of communicating that created private worlds for anyone who held the keys. It was pretty awesome to think about sharing information that way—and even cooler to imagine cracking other people’s codes.

The first time I read a Nancy Drew book, I became obsessed with the series. Its star teen detective solved mysteries by reading messages written in invisible ink or unscrambling clues written in ciphers (Arthur Conan Doyle’s The Adventure of the Dancing Men, featuring the famous fictional detective Sherlock Holmes, uses a classic example of a substitution cipher, in which regular letters are replaced with different letters or symbols, as part of its plot). I never had any mysterious treasure to hide or thefts to solve, but there was still some information I wanted to keep to myself. Taking cues from Nancy, I got to work on some codes of my own.

When I was 10, my aunt gave me a lockable diary for my birthday, and I was delighted. I decided to add an extra level of security by coming up with code names for girls in my class. This way, in case, you know, the FBI ever found my diary, “Katie” would NEVER KNOW I WAS MAD AT HER! My friends and I also devised a few verbal codes, which we used obsessively. It helped us feel like we were part of a secret society—one called FRIENDSHIP.

Our favorite was Pig Latin. To speak Pig Latin, you move the first letter of a word to its end and add the suffix -ay (for example, pig becomes igpay; for words beginning with vowels, you just add -ay to the whole word). Pig Latin was fairly well-known, though, so together we tried to come up with new variations—like moving the first two letters of a word to the end instead of just the first one. (This posed obvious pronunciation problems—we weren’t genius code-makers, OK?!) My friends and I didn’t even always understand each other, but being perfectly clear wasn’t the point. The real fun was that we were bonding by creating something that only we (sort of) knew.

At school, both my sister and I studied French—a language my parents didn’t speak. This meant we had a clandestine way of complaining about them when we were annoyed—and we didn’t even have to make up a new language to do it! If one of us had to do a chore we didn’t want to do, or wasn’t allowed to go out with our friends, we could roll our eyes and say, “Comme ils sont enneuyeux!” instead of saying in English that our parents were being plain annoying, and therefore running the risk of being heard, then scolded and/or sent to our rooms. I’m fairly certain they could sense the tone of what we were saying even if they didn’t know exactly what we were saying, but when my sister and I spoke French, we felt safe enough to discuss how we really felt, and with just each other.

The darker side to all of this is that when someone is excluding you through codes or language, it can be frustrating and alienating, especially if they’re doing it on purpose, which can feel rotten and cruel (I’m sorry, Mom and Dad). But enclosing myself in private spheres with my friends and family by using secret words and not-so-secret languages with each other has always felt different. Our meaning was obscured, but with each message, we were also saying: Hey! We’re in this together. ♦