Have you ever thought about how an anthropological essay on the typical teenage sleepover might be written by a stranger to the phenomenon? Or how someone could try to explain its rituals—slumber party games—to the uninitiated? Like, we know that a pillow fight is all in good fun. But to the untrained eye, it could just as easily look like a riot where girls laugh maniacally and thrash cloth containers of feathers over each other’s heads.

I grew up taking slumber party games for granted. Where did they even come from? What do they mean?! Today, I attempt to find out. 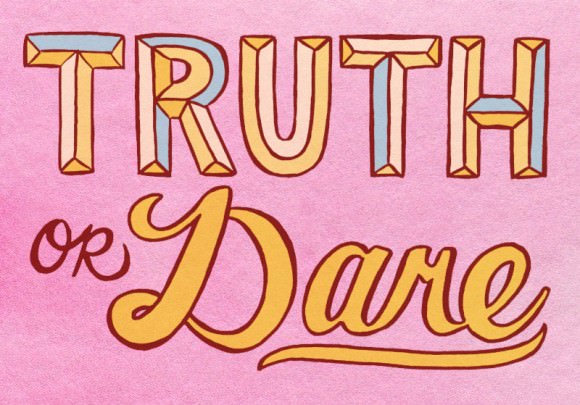 This game is the fastest proven method to take a slumber party from zero to Oh my god, we need an hourlong series on the CW to document all this DRAMA. It requires players to 1) answer any question honestly or 2) agree to perform some sort of physical challenge when it’s their turn. The catch is that you have to pick “truth” or “dare” before you know what either option might entail. It works best with a group of people who are creative and have a high tolerance for embarrassment.

It’s likely that Truth or Dare originates from an English game called Question or Command, which was defined in the 19th century as “a Christmas game, in which the commander bids his subjects to answer a question which is asked. If the subject refuses, or fails to satisfy the commander, he must pay a forfeit or have his face smutted.” In the modernized version, the equivalent of having your face smutted is being dared to like your crush’s oldest Instagram photo.

2. Light as a Feather, Stiff as a Board 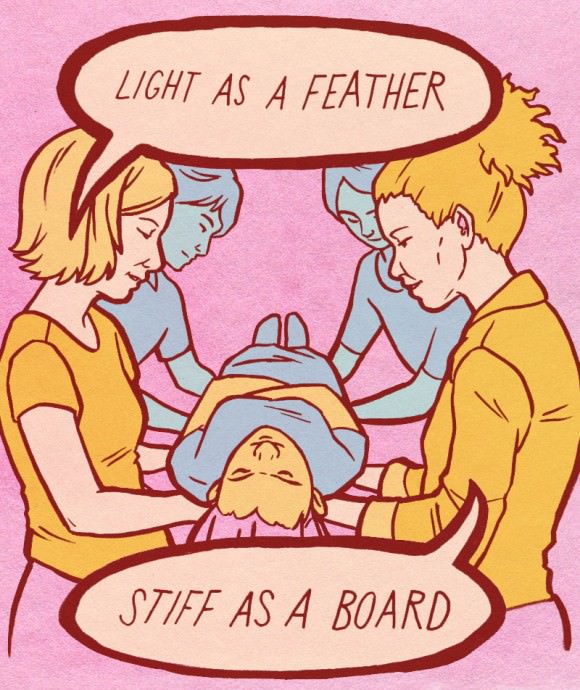 Light as a Feather, Stiff as a Board exemplifies what a sleepover should be: spooky, slightly dangerous, and, most importantly, all about teamwork. During this game, one person lies on the floor while everyone else kneels around them and puts two fingers from each hand beneath their body. The people in the circle start chanting, “She’s looking ill,” then, “She’s looking worse,” then, “She’s dying,” and finally, “She’s dead.” (Actual footage of a real, live slumber party illustrates this practice pretty well.) The idea is that, somehow, the body of the person in the middle of the circle becomes light enough, and board-like enough, for everyone else to lift using only their fingers.

This game dates back to at least the 17th century, when Samuel Pepys, an English naval administrator, recorded a story his friend had told him in his diary:

[F]our little girles [sic], very young ones, all kneeling, each of them, upon one knee; and one begun the first line, whispering in the ear of the next…and putting each one finger only to a boy that lay flat upon his back on the ground, as if he was dead; at the end of the words, they did with their four fingers raise this boy high as they could reach…”

Between this and Truth or Dare, big ups to the British for laying the foundation for the modern slumber party. 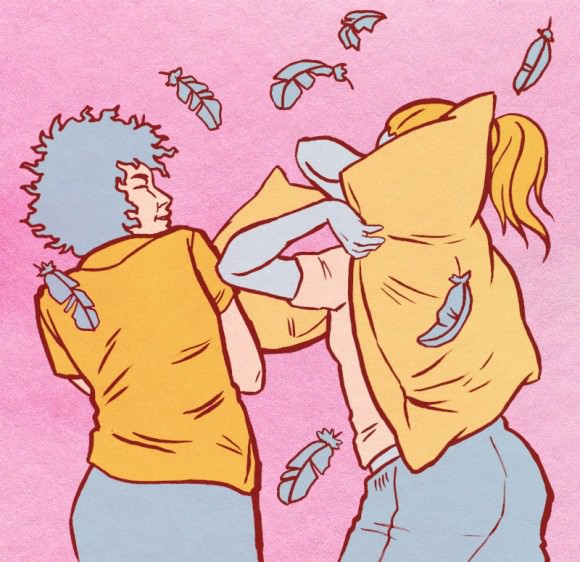 Much like a food fight—but less messy and wasteful—the pillow fight is the international expression of soft anarchy. The origins of pillow fighting are unknown, but I am sure that the first person to initiate a cushion battle could not believe the power they suddenly yielded (much like our ancestor who first discovered fire).

The world’s largest pillow fight happened this past September, when more than 4,000 college students at the University of California, Irvine gathered to collectively swat one another. But is a pillow fight really a pillow fight if it doesn’t happen at a slumber party? Apparently they played “Break Free” by Ariana Grande during the brawl, so I will give them credit for doing their best to create a sleepover-like environment. 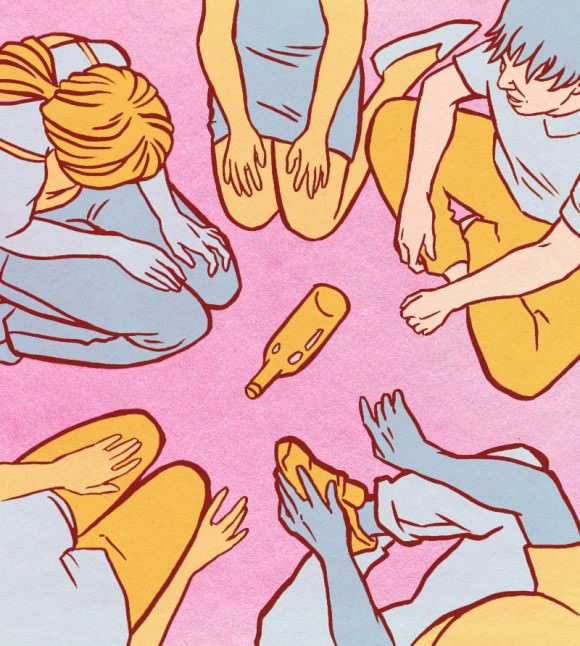 You’re probably familiar with Spin the Bottle, the game where everyone sits in a circle, someone spins a bottle in the center, and then that person has to kiss whomever the bottle eventually points towards. But did you know that before this game was christened by Americans in the 1950s, it was impossible to convey sexual tension between teens in movies?! OK, that’s not entirely true, but next time someone suggests playing Spin the Bottle and you feel deeply embarrassed, just remember that at least it’s not a game of life or death. Maybe the worst thing that could happen is your braces get stuck to someone else’s? 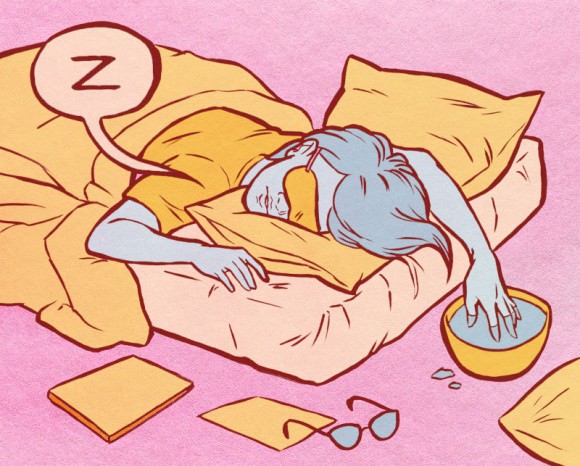 This is a single-player game of unknown origins that, if we’re being honest, is more accurately a prank. The logic is that if you stick someone’s hand in a bowl of water while they’re asleep, the sensation will stimulate their bladder and they’ll wet the bed. Mythbusters proved that the only things that can make you pee in your sleep are drinking too much liquid before bed and/or a loss of bladder control.

I find this to be one of the most deeply cruel pranks—when you wake up the morning after a sleepover, your number-one priority should be perfecting your Toaster Strudel frosting technique, and not having to deal with a pee-soaked sleeping bag. No one (that I know of) has ever tried this maneuver on me, but its presence in an episode of As Told by Ginger has disturbed me for many years. 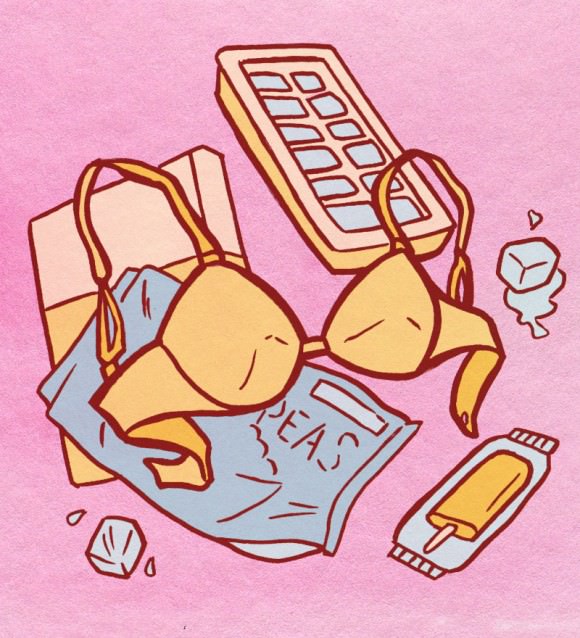 As far as slumber party activities go, this is the least chill (metaphorically) but also the most chill (technically). Traditionally, it is a punishment given to the girl who falls asleep first. You’re supposed to sneak into her bag to steal her bra, and then soak the bra with water, put it in the freezer overnight, and discreetly stick it back in her bag in the morning, just before she puts it back on. I don’t know who first tried this and have never heard of anyone seamlessly pulling it off. To quote this Yahoo Answers page:

The answers to these questions are up to you! Remember, next time you’re playing this or any other slumber party game, you’re not just having fun—you’re carrying on traditions passed down by generations of girls in pajamas. ♦