I treated B. like my therapist instead of my friend. 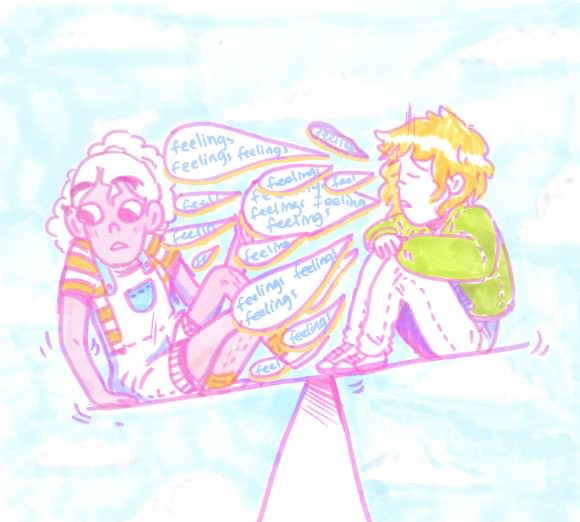 I didn’t really know B. before I unloaded on her. I was in ninth grade, and she was in eleventh. She had just transferred to my high school from another city. This was an all-girls’ school with roughly 80 students, so fresh faces were rare. Most of us grew up together, babysat for the same families, and had been seeing each other at synagogue every weekend since we were toddlers. But B. was new. She seemed to have perfectly mastered the “frazzled, bookish, and smart, but still really cool” look. I liked her immediately when I saw her.

We were in a class together and got paired up as partners, which meant we had to have a small conversation at least twice a week. The first time we introduced ourselves, we quickly learned that we had the same taste in books and spent a couple minutes bonding over that. I wanted to be her friend, but she never stuck around to talk with me after class and I didn’t know how to become friends like I wanted us to be. I felt constantly depressed and needed to be loved and cared for, but specifically to be loved and cared for by B., whom I admired and wanted to be close to. One day after class I broke down crying, and when she asked me what was wrong I told her everything.

I started telling her all my secrets—things I’d never talked about with anyone, including my best friends at the time. The first time I contemplated suicide, I called her. It was three in the morning and she came right over. I had written an elaborate, detailed will and was cradling a bottle of pills, refusing to put them away. She gave me a hug and then made me laugh by getting mad about what I had left her in my will (a book she didn’t like) and then made me explain why I divvied up my belongings the way I did. By the time I was done explaining, we were both exhausted and fell asleep. I didn’t take the pills, but I made her promise not to tell anyone.

When I felt terrible during school, I would poke my head through her classroom door window so she would know to meet me in the school’s basement. There, I would lie on her lap and cry and she would stay quiet, just stroke my hair and let me cry. She never promised me everything would be OK. She just listened to me cry and then promised not to tell anyone afterwards. I didn’t think it was unhealthy because I didn’t see that I was waking her up in the middle of the night or keeping her away from class. I didn’t see that we weren’t really friends because our entire relationship revolved around my need for support and love and her ability to provide it. I had turned her into my unofficial therapist.

You might be thinking, But coming over at late hours and letting each other cry is what friends are supposed to do for each other! And that’s true. But with my other friends, it’s never been a question of their safety or mine. With B., it almost always was.

Because she didn’t know me well at all, she didn’t know the right thing to do or the right person to tell when I told her I was in danger. While it felt like we were getting close, I was really just treating B. like a sworn-to-secrecy soundboard, and not my friend. I was telling her things that were affecting my ability to do well in school, have a functioning social life, and sleep at night, and as a result I was affecting her ability to do well in school, sleep well, and have a functioning social life. Besides waking her up at odd hours to talk, pulling her out of class and away from her other friends, I was also unloading all the pain and anxiety I felt onto her and asking her to carry it for me. She never told me how hard it was for her, and I think it was because she was too worried that I could get worse—and then talk to no one or do something harmful to myself. I was telling her about my safety being in jeopardy and she was the only one who knew. There was nothing wrong with me leaning on B. for support, but it wasn’t OK for me to be only leaning on B. for support—and then forbidding her from telling anyone about what were sometimes life-or-death situations. While it may have felt good for me to trust and rely on her, it wasn’t healthy for either of us.

A few years later, I got a licensed therapist. I only realized how much I was asking from B. throughout high school after talking with someone who was qualified to help me process the feelings overwhelming me. Instead of unloading onto someone who I knew would worry about me and love me without forcing me to fully process what was going on, I began how to ask how she was doing; about how she was feeling and how her day was going. We finally became real friends.

I try not to blame myself too much for how I acted back then. I was feeling alone and needed love, and telling B. all my secrets felt like a way to instantly become close to her, and for me to get rid of parts of myself I didn’t like by wrapping her in my life. Now I try and recognize when I am asking my friends for a healthy amount of support—support that is mutual, and that doesn’t place an unfair amount of “responsibility” on that person. I’ve tried to learn how I can ask them to be there for me without dragging them down, too. Most of the time, I just want to feel loved. So I remind myself to tell them that, which makes me feel closer to them than telling my secrets ever did. ♦